Cleveland police gunned down 12-year-old Tamir Rice while he was playing with a pellet gun Nov. 22, 2014. The killer cop, Timothy Loehmann, was never charged, and he was only fired in 2017 on an unrelated disciplinary issue. Loehmann’s partner, Frank Garmback, was given a 10-day suspension, which was cut in half through the grievance procedure. 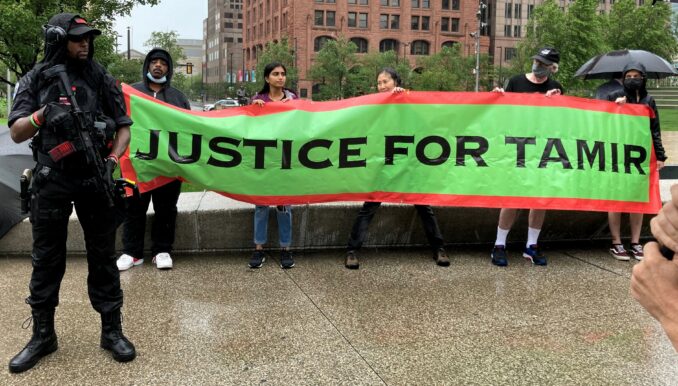 On June 25, which would have been Tamir’s 19th birthday, Tamir’s Campaign for Justice held a demonstration to demand the U.S. Department of Justice reopen its investigation into the killing. The DoJ closed the case in 2020 without even notifying Tamir’s mother Samaria Rice or the family attorney Subodh Chandra.

Speakers at the rally took note of the sentencing of Derek Chauvin, who killed George Floyd, which was announced the same day. While clearly not enough, Chauvin’s sentence was longer than sentences seen in previous racist, police brutality cases, notably Tamir’s.

Despite pouring rain, activists took to the streets and marched to the local DOJ office, chanting “One wish: justice.”