Two of Portland’s delivery companies announced June 23 they will stop working for Amazon because of unsafe working conditions. The companies, Last Mile Delivery and Triton Transportation, are suing Amazon for increasing the pressure on drivers by making arbitrary and unreasonable demands and firing drivers who work for the contractors without notice. 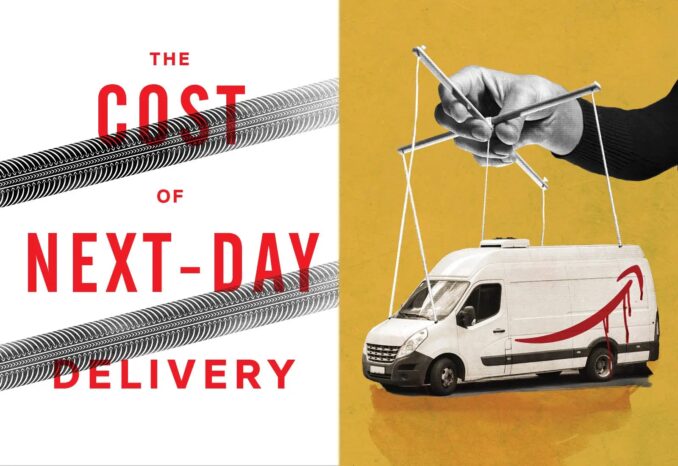 Last Mile Delivery co-owner Tracy Bloemer told workers, “Amazon has been nickel-and-diming us so bad, that if we don’t make change we can no longer offer the support and incentives that thus far we have been able to provide.” She said workers are getting paid less while being expected to deliver more. Drivers average 200 deliveries a day. Some make more than 250 stops, which is two minutes per package, based on an eight-hour shift. (tinyurl.com/yggxnqzp)

Together Triton and Last Mile employ about 155 drivers with an average of 22,000 deliveries in the Portland area.

Abhorrent conditions are causing large turnover among drivers working for Amazon contract companies. Drivers complain that to save time they are often forced to skip meals, breaks and bathroom stops, urinating in bottles to save time. They are forced to deliver packages by their promised delivery date and can’t go home until all packages are delivered.

The actions of the contract companies mean drivers are without work indefinitely while they go through the litigation process with Amazon. Bloemer offered workers no promises for the future.

Over the last six years Amazon has developed a gigantic national delivery network, with thousands of vans running seven days a week delivering nearly 5 million packages weekly. Amazon has created at least 200 “independent” delivery companies with the goal of managing deliveries to speed up the process and squeeze costs down.

Buzzfeed published a national survey of safety violations by Amazon’s delivery companies titled “Amazon’s Next-Day Delivery Has Brought Chaos and Carnage to America’s Streets — but the World’s Biggest Retailer Has a System to Escape the Blame.” Buzzfeed found public documents showing hundreds of accidents involving Amazon drivers in the past five years. There have been at least six fatalities and many serious injuries reported just in states with public records. Many more go unreported or cannot be linked to the company. (tinyurl.com/75k9v7sa)

Amazon says it spends tens of millions of dollars on safety; yet drivers are given little training, and company vans are often run down with balding tires, cracked or missing side-view mirrors or doors that don’t shut properly. Some trucks have no rearview window or backup camera. Drivers, given too many packages to fit in cargo, often pile parcels so high in the cab that they can’t see out the windows.

Amazon claims they are helping new entrepreneurs build small delivery businesses without controlling their companies or labor force. However, many without start-up funds take advantage of Amazon’s preferred program to lease vans from Amazon, purchase insurance and let Amazon manage their payroll. Amazon can deny any responsibility for working conditions, such as labor law violations, failing to pay overtime, denying workers breaks, discrimination, sexual harassment and other forms of mistreatment.

In the last six years, Amazon’s profits have skyrocketed. At the end of April, Amazon announced first-quarter earnings that its capital expenditures grew 80% over the preceding 12 months. Last summer they bought 20,000 vans from Mercedes-Benz to be leased to their delivery companies around the country.

In March 2017, Detroit Amazon delivery drivers employed by Silverstar voted to join the Teamsters. They were fighting for overtime pay, safe working conditions and elimination of the punishing work hours.

Two months later, one of the labor leaders was fired by the company. The manager said on record, “I was told to write you up for anything because you joined the union.” Silverstar settled out of court, paying a $15,696 settlement. Silverstar shut down a few months after the firing and relocated, putting dozens of drivers out of work. Amazon has since developed workshops and held meetings at many locations on how companies can prevent unionization.

In 2018, Samuel Cabelus was killed by an Amazon delivery driver. A year later his mother Winnie Cabelus posted an article on Facebook called Amazon Deliveries. “This is about shitty driving, yes,” she said, “But this is about low-paid, inexperienced and untrained delivery drivers operating gigantic vans they don’t know how to drive, under enormous pressure to deliver quickly. This is profit-driven, corporate greed behavior without consideration for anyone else’s humanity.”