Derek Chauvin, the white police officer convicted of lynching 46-year-old George Floyd May 25, 2020, was sentenced June 25 in Minneapolis, Minn., to 22 1/2 years in prison. Chauvin faced upwards of 40 years when a jury unanimously convicted him in April of second-degree unintentional murder, third-degree murder and second-degree manslaughter. 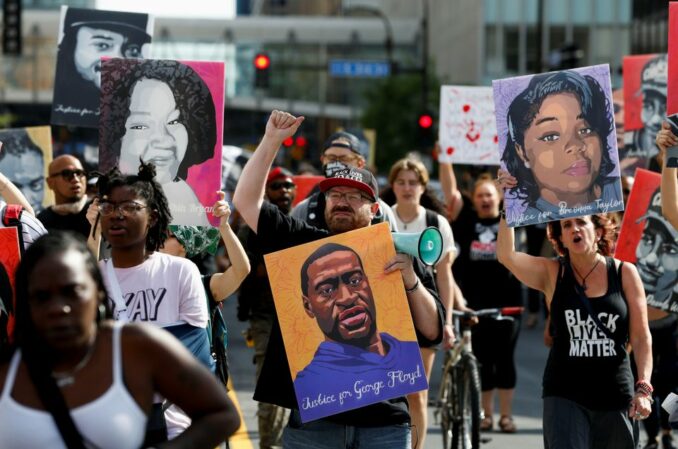 Chauvin still faces two federal charges — one for violating the civil rights of Floyd and the second indictment for hitting a 14-year-old Black youth in the head with a flashlight and kneeling on him in 2017. The three other officers involved in Floyd’s murder — J. Alexander Kueng, Thomas K. Lane and Tou Thao — face similar federal charges and are scheduled to go to trial March 2022 on state charges for complicity in Floyd’s killing.

Floyd’s family, along with many activists, felt that the sentence handed down by Hennepin County District Judge Peter A. Cahill was too lenient, considering the fact that Chauvin will be eligible for parole in less than 15 years. The time he spent in jail between his arrest last year until June 25 is counted towards his sentence.

Rev. Al Sharpton stated: “This is the longest sentence they’ve ever given, but this is not justice. Justice is George Floyd would be alive. Justice is if they had done sentences like this before, maybe Chauvin would have thought he would have not gotten away with it.” (Washington Post, June 25)

It bears remembering that the reason why Chauvin and the other three officers complicit in Floyd’s murder were indicted at all was because of Darnella Frazier, a then 17-year-old Black woman who bravely videotaped the 9 minutes and 29 seconds of Chauvin’s knee on Floyd’s neck as he pleaded for his mom until he stopped breathing.

After the video of the lynching was made public, mass rebellions and protests erupted not only in Minneapolis but throughout the country and around the world, especially since it took days for Chauvin to be charged and arrested. These multinational, multigender and multigenerational protests, led by the Black Lives Matter movement, impacted every aspect of society including sports and entertainment, especially throughout the summer.

The naked brutality of the police with tear gas, rubber bullets and night sticks was put on full public display during peaceful and militant protests. Confederate statues and other symbols of white supremacy from the North to the South and worldwide were brought down by protesters.

It is very rare that police officers like Chauvin are arrested, much less convicted and sentenced for killing any person, be they white or a person of color, unless sustained mass pressure from below becomes a decisive factor. Policing as a force in a society based on classes, like the U.S., is above the law. Police are mandated with the unprecedented authority to become judge, jury and executioner by a still-majority, white ruling clique of corporate billionaires.

Nothing has changed before or after the Chauvin conviction and sentencing, in terms of Black and Brown people being racially targeted by the police. Nothing has changed for the families of Tamir Rice, Michael Brown, Rekia Boyd, Sandra Bland, Breonna Taylor, Shantel Davis, Elijah McClain, Walter Wallace Jr. and countless others calling for any kind of justice, whether these deaths were videotaped or not.

As an act of solidarity, it is important to defend the right of the victims’ families and oppressed communities under constant police occupation to demand that accountability be arrests, convictions and jail time for killer cops. However, it is just as important for revolutionaries and socialists to call for the abolition of not only the police and other other repressive arms like ICE, but for the abolition of capitalism, a system that puts the profits of the superrich before the needs of the people. One cannot exist without the other.