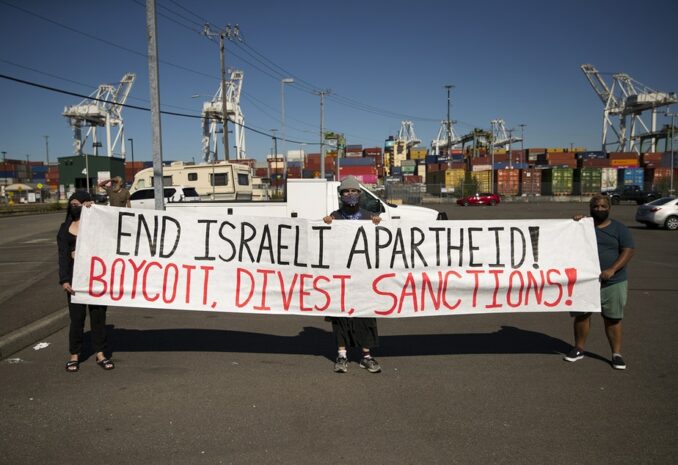 The revolutionary Palestinian resistance to Israel’s invasions, war, forced annexation and mass evictions has broadened solidarity for their cause. Port blockages and waterfront unions’ solidarity from Oakland, Calif., to Italy have stopped Israeli ships from carrying out trade for their U.S.-backed warfare state.

A ship from the Israeli-owned company Zim pulled into the Port of Seattle June 2. Due to the actions and vigilance of hundreds of activists led by Palestinian feminist collective Falastiniyat, the ship was delayed from docking until June 17. Falastiniyat works in close coordination with the Arab Resource and Organizing Center in San Francisco.

On the evening of June 17, Seattle cops violently attacked a demonstration blocking the entrance to the terminal. The cops arrested 11 activists, which led to the ship’s cargo being unloaded. But Falastiniyat activists called their Block the Boat actions a victory, because the long delay of the Zim ship probably cost them millions of dollars.

Falastiniyat/Block the Boat activists had effectively picketed and stopped the ship from being unloaded June 12 with the support of International Longshore and Warehouse Union, Local 19.

These actions caused Zim and port officials a lot of consternation and hesitation. It was well-known that the port commission and the mayor’s office were being heavily pressured by the Israeli foreign ministry. But it is U.S. imperialism which controls its agent, Israel, and the Port of Seattle too.

During the two weeks of actions, the Seattle Education Association (SEA) passed a resolution June 14 to support the Palestinian call for Israeli Boycott, Divestment and Sanctions and the End the Deadly Exchange Seattle campaign.  (tinyurl.com/3bw77s9x) This passed by over 90% in the Representative Assembly of the SEA made up of 5,500 teachers and staff.

The resolution calls for divestment of an Israeli regime which practices apartheid against Palestinians on their ancestral land. It also calls for an end to cooperation with Israeli police — Seattle cops have been heavily involved as partners with equally brutal Israeli cops.

In the last week of the port actions, a number of local elected officials came forward with a statement to support Block the Boat and demand the Zim ship leave Seattle. They expressed solidarity with the ILWU members’ right not to cross a community picket line. Signers included Seattle City Councilpeople Teresa Mosqueda, Kshama Sawant and Lisa Herbold.