Consuewella Africa, 67, a beloved sister in the MOVE Organization, passed away June 16 following hospitalization for breathing problems due to stress. Her family cites the probable cause as revelations surfaced in April that the University of Pennsylvania and the City of Philadelphia still held the remains of her daughter Katricia “Tree” Africa, 14, who was murdered by the government May 13, 1985. 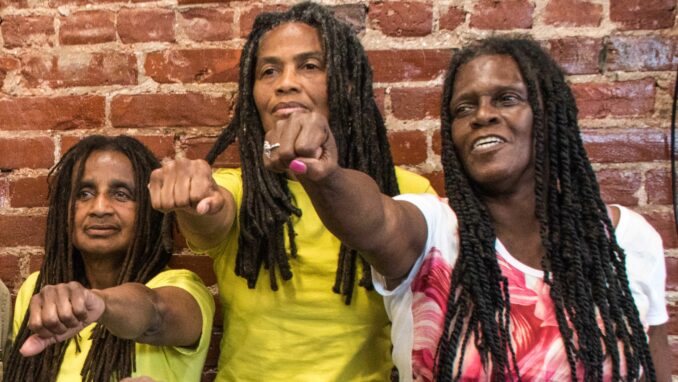 Learning that the University of Pennsylvania Museum and Princeton University used remains believed to be from Tree had troubled and weighed heavily on her, according to MOVE member Janine Africa. At a press conference in April regarding the mishandling of the remains, Consuewella tearfully denounced the state, saying, “It’s just continuous, nonstop, vicious, violent, sadistic, ongoing abuse of the MOVE organization. Why? Because we stand up and tell the truth about this rotten world system.”

Compounding the agony, weeks after the April 26 press event, the city revealed that Health Commissioner Thomas Farley had ordered the remains of other MOVE members cremated and discarded without notifying relatives in 2017. After Farley resigned, another medical examiner’s office employee reported that Farley’s orders were not carried out.

Janine Africa stated, “The situation just put so much on her that it tore her down, and she couldn’t come out of it.” (Philadelphia Inquirer, June 17) MOVE family members expressed hope that Tree and Consuewella could be buried together.

Consuewella Africa suffered decades of assault from the system. Her daughter Zanetta “Netta” Africa, 12, was also killed in the 1985 fire ignited when the state dropped a bomb on the family’s home in West Philadelphia, resulting in the deaths of six adults and five children and the destruction of over 60 homes. She is survived by her son Lionel “Lobo” Dotson, 44, and spouse Frank Edwards.

A native of South Philadelphia, Consuewella joined the MOVE organization in the early 1970s. In 1978, she was among MOVE members collectively charged in the death of a police officer, who many suspect was killed by another cop. She spent 16 years in state prison for simple assault before being paroled in 1994. Her daughters were killed while she was imprisoned.

Consuewella was well-known and respected by the movement in Philadelphia and beyond. Described by many family members as “no nonsense,” she is remembered by Sue Africa in the same Inquirer obituary as “very vibrant, very alive, a very strong runner, very strong period, very vocal and assertive.”

Pam Africa, Minister of Confrontation for the MOVE Organization, recalled meeting Consuewella in May 1977 during the police blockade of the family’s Powelton Village home. “She never waivered,” Africa told WW. “I remember her sitting in the sun with her son Lobo. I saw her go through the Aug. 8, 1978, confrontation with the police.

“When she and Alberta Africa were in state prison, on Dec. 3, 1981, the guards tried to mess with Bert. Consuewella confronted one ‘white shirt’ officer and knocked him out cold.

“Consuewella was kind, loving, caring, but you messed with her family you had hell to pay. She was a fighter from beginning to end — a 360 revolutionary, respected by people around the world.”