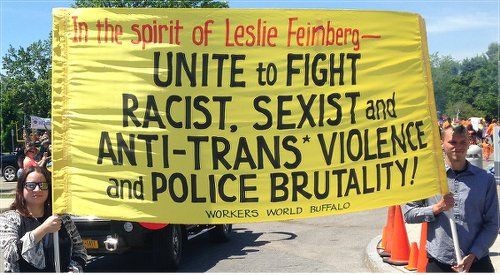 On June 12th the Buffalo branch of Workers World Party hosted its second annual People’s Pride event. Much of the focus this year was around shutting down many of the anti-trans bills flooding the legislature as we speak, but also the call to keep cops and Zionist colonizers out of Pride. The march held both lanes of traffic on Elmwood Avenue during the popular event known as Porchfest. Onlookers to the event watched and cheered and joined in chants such as “Defend trans youth!” and “L G B T, we’ll fight till we are all free!” The members of the branch are looking forward to hosting this action again next year, even if after the “end” of the COVID crisis other Pride events resume.

— Story and photo by Ezra Echo