In an immense victory for Indigenous water protectors and land defenders on this continent, TC Energy, formerly known as TransCanada, revealed its investors have quit the Keystone XL pipeline. Work has completely halted — the KXL tar-sands pipeline is “dead in the water.” 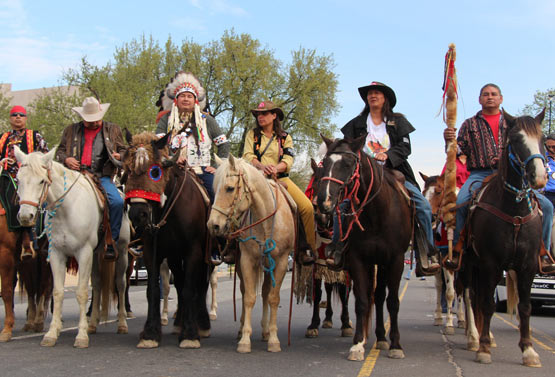 Indigenous members of the Cowboy Indian Alliance protest the KXL in front of the U.S. Capitol.

The Indigenous Environmental Network stated June 9: “After more than 10 years of organizing we have finally defeated an oil giant; Keystone XL is dead! We are dancing in our hearts because of this victory! From Dene territories in Northern Alberta to Indigenous lands along the Gulf of Mexico, we stood hand-in-hand to protect the next seven generations of life, the water and our communities from this dirty tar-sands pipeline. And that struggle is vindicated. This is not the end — but merely the beginning of further victories.”

Fort Belknap Indian Community President Andy Werk said, “We were not willing to sacrifice our water or safety for the financial benefit of a transnational corporation. We are thrilled that the project has been canceled.” (NARF.org, June 9)

Rosebud Sioux Tribe President Rodney M. Bordeaux said, “This is great news for the Tribes who have been fighting to protect our people and our lands. The treaties and laws guarantee us protections, and we are committed to see that those laws are upheld.”

Big Oil giant TC Energy is building multiple pipelines from the tar sands in western Canada. The ecological damage of tar-sands extraction is a nightmare scenario that has unfolded in Alberta. While the world faces the horrors of increased global warming, tar-sands mining has destroyed boreal forest (which naturally traps massive amounts of carbon) and wasted habitats and wetlands. Extraction of the extremely heavy bitumen oil from the tar sands uses vast amounts of freshwater and releases huge quantities of toxic wastewater into the environment. (Greenpeace, May 17)

TC Energy planned this network to move 800,000 barrels of crude oil a day from the tar sands to ports on the Gulf Coast. Most of this network was built during President Barack Obama’s administration and was already operational. The entire network is an environmental nightmare of looming catastrophes. Its completion was an existential threat to the delicate geology of the Nebraska Sand Hills, where a spill would ruin the entire region’s groundwater and contaminate drinking water supplies for humans and all life.

KXL’s route ran through fragile ecological habitats, Indigenous sacred and burial sites, as well as prime farmland. Indigenous communities were joined by white farmers and ranchers in the Cowboy Indian Alliance to fight the KXL pipeline from Lincoln, Nebraska, to Washington, D.C. The KXL was stopped by the struggle in 2015, but incoming President Donald Trump gave it a green light in 2017 with a new permit.

Meanwhile, the Indigenous women leaders of the KXL water protectors had inspired Lakota youth from Standing Rock reservation, who returned home and kicked off the powerful struggle against the Dakota Access Pipeline. The youth carried out long-distance runs to broadcast that pipeline’s threat to the drinking waters of the Missouri and Mississippi Rivers. Then Indigenous women joined by Two Spirits built the struggle at Standing Rock against DAPL — a majestic struggle joined by thousands of Indigenous people and supporters from all over Great Turtle Island and beyond.

In the fight to protect Standing Rock’s Constitutionally guaranteed “Winters Rights” — protection of a reservation’s clean waterways under the 1908 Winters v. the U.S. decision — the water protectors faced brutal repression by county and state cops from many states, the National Guard and illegal mercenary thugs. Water protectors were beaten, bitten by attack dogs, pepper sprayed, shot with rubber bullets, injured by illegal use of sound cannons, brutalized while praying, strip searched, shot at by National Guard snipers, arrested, then numbered and held in dog kennels. A young woman had her arm blown up by a concussion grenade.

Then, while Obama was still in office in November 2016, the forces of repression attacked Native water protectors and their allies with water cannons in the freezing temperatures of the Northern Plains. Linda Black Elk, of the Standing Rock Medic and Healer Council, treated protesters for injuries and hypothermia. “Last night was a really critical life-or-death situation. There were hundreds of people out on the frontlines. People were first soaked down with tear gas and then sprayed with a bunch of water.” (nbcnews.com, Nov. 21, 2016)

After President Trump’s inauguration, Energy Transfer Partners (ETP) also got approval to finish DAPL. Millions of gallons of crude oil, fracked from the depleted Bakken oil fields of North Dakota and Montana, now flow under the Missouri River to a pipeline in Illinois, then down to refineries in the Gulf for export, threatening clean water for Standing Rock and the 18 million people who live downstream.

The KXL victory represents one battle in the war to stop tar-sands oil. Big Oil planned to triple production of this dirtiest crude oil, with a goal to flood the U.S. with 6 million barrels a day. (nrdc.org, Aug. 13, 2015) Native nations and environmentalists are now intensifying the struggle to shut down the other Trump-approved pipeline projects, including DAPL and Enbridge Line 3 and Line 5.

Line 5 consists of two pipelines over 60 years old that threaten the Great Lakes in Michigan, Wisconsin and Canada. Enbridge is fighting a multistate Indigenous and environmental movement and orders by Michigan Gov. Gretchen Whitmer to shut down Line 5.

The fight goes on, but stopping KXL is a major victory against Big Oil. Ponca Tribe of Nebraska Chairman Larry Wright Jr. said, “On behalf of our Ponca Nation we welcome this long overdue news and thank all who worked so tirelessly to educate and fight to prevent this from coming to fruition. It’s a great day for Mother Earth.”

All humanity and all species are threatened by global warming, resulting from the use of fossil fuels. Stopping global warming will require transition out of the fossil-fuel economy. And saving Mother Earth requires saving waterways from contamination by Big Oil. Clean water is a human right and a right of all species in our precious biosphere on Earth.