China’s new Tiangong space station received its first three astronauts June 17, marking a major milestone in the country’s rapid scientific and technological development. Tang Hongbo, Nie Haisheng and Liu Boming, known as “taikonauts,” successfully docked their Shenzhou-12 spacecraft with the Tianhe-1 core module, which had been placed into orbit during a previous uncrewed launch. Together with a cargo ship, these three components form the first phase of the world’s newest space station. 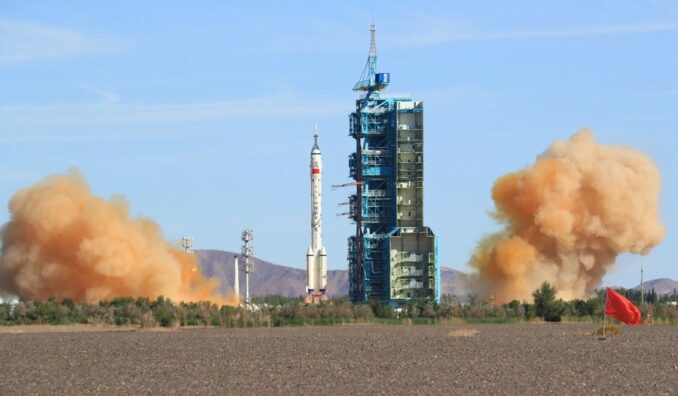 Completing the station will require a total of 11 launches through 2022: four crewed missions, four cargo missions and three module launches. In addition to the Tianhe-1 core module, two laboratory modules will form the station’s habitable areas. Expandable in design, additional launches through 2030 will see the station potentially grow to 180 metric tons in mass and operate for 15 years. (CGTN, June 18)

By contrast, the International Space Station, launched in 1998, will be decommissioned in the coming years, likely making Tiangong humanity’s only permanent outpost in space. This is ironic, considering the U.S. had banned China from participating in the ISS. Russia has announced it will likely pull out of the ISS by 2025. The station shows signs of aging, with leaks becoming a periodic concern. (sciencemag.org, April 20)

Tiangong comes with cutting-edge features, such as an automated docking system that drastically reduces the time from launch to completed docking. China’s previous mission, Shenzhou-11 took 40 hours to dock with a prototype module in 2016. Shenzhou-12 took just six and a half hours. (Global Times, June 17) By contrast, SpaceX’s Dragon Capsule, which docked with the ISS in April, took 23 hours.

Tiangong has an innovative QR code system, so that everything on the station can be quickly located. It features two robotic arms on its exterior to help with construction and resupplying. Likened to a three-bedroom apartment, it has sleeping areas, a dining area and kitchen, a gym and a sanitation area. With onboard WiFi, a smartphone app controls such indoor environments as lighting and temperature. Each person onboard has a private line to talk with their families back on Earth. (Global Times, June 18)

Crews of three will rotate on missions lasting six months, and the station will be open to other countries. Seventeen countries have officially confirmed their participation, and astronauts from several countries are now learning Chinese. Astronauts from the European Space Agency have already trained on a mock Shenzhou spacecraft and could participate in future missions to Tiangong.

Russia may pursue its own space station, but is cooperating with China on other projects, including constructing a groundbreaking lunar base which could host its first cosmonauts and taikonauts by 2030.

The U.S. government, however, will not participate in any Chinese space project. The head of the U.S. Space Command ridiculously charged in a May congressional hearing that the station’s large robotic arms could potentially “grapple” a satellite, making it a “threat” to the U.S. military. Despite the fact that the U.S. has been using robotic arms since the 1990s, the U.S. media and government hyped up this “threat” and turned it into yet another justification for conflict with China.

Such scare tactics show up repeatedly in U.S. foreign policy, as when former Secretary of State Colin Powell in 2003 held up a mock vial of anthrax at the United Nations to scare nations into backing the U.S. invasion of Iraq. Now the specter of a “giant Chinese robotic space arm” has provided Space Command, hastily created by President Donald Trump, with more reason to exist.

Despite the hostile actions of the U.S. to undermine China’s overall development, it has nevertheless achieved a remarkable ascent. In fact decisions like excluding China from the ISS only motivated it to independently develop its own, newer station. The foundations for China’s success were laid with the 1949 Chinese Revolution, which created the conditions for its technological development.

China first produced airplanes and cars in the 1950s. It launched its first satellite in 1970. Many capitalist countries even today do not produce cars, airplanes or satellites, which require a high level of technical development and industrial capacity. These were tremendous achievements for a country that had so recently been devastated by wars and imperialism.

China’s space program continues to progress since its first satellite launch more than 50 years ago. The Chang’e-4 mission in 2019 made China the first to land a rover on the far side of the moon. The Chang’e-5 returned lunar soil samples to Earth. In May this year, its ambitious Tianwen-1 mission to Mars succeeded in placing an orbiter around the planet, plus a lander and rover on its surface.

China is the only country to accomplish all three on a first mission. China is planning robotic missions to capture and return samples from asteroids and crewed missions to the moon and Mars.

Perhaps the most profound part of Tiangong is not the technology, but the fact that all three members of the first crew come from rural farming families. Just a few generations ago before the Chinese Revolution, this would be inconceivable — not only from a scientific perspective but also from a social one. Peasants, the vast majority of the population then, were harshly oppressed by semifeudal landlords. The Chinese nation was under foreign imperialist domination.

Tiangong means “heavenly palace.” Now, 100 years since the founding of the Communist Party of China, the children of farmers have entered the heavenly palace. The first human in space, Yuri Gagarin of the Soviet Union, was the son of a bricklayer and a milkmaid. The first woman in space, Valentina Tereshkova, also of the USSR, had been a textile factory worker.

Workers, whether on Earth or in space, make everything run.