June 14 marks 200 days of the Farmers’ Protest at the Delhi border of India. Farmers remain steadfast in their goal to have the state repeal three oppressive farm bills. Since Workers World last reported on the protests in February, there has been important movement work taking place throughout India.

Farmer unions called for a 12-hour nationwide shutdown of India’s railways March 26 to commemorate four months of protest against the farm bills. Demonstrators in Haryana and Punjab successfully blocked railways at 32 locations and caused the cancellation of at least four passenger trains. (Alarabiya News, March 26) 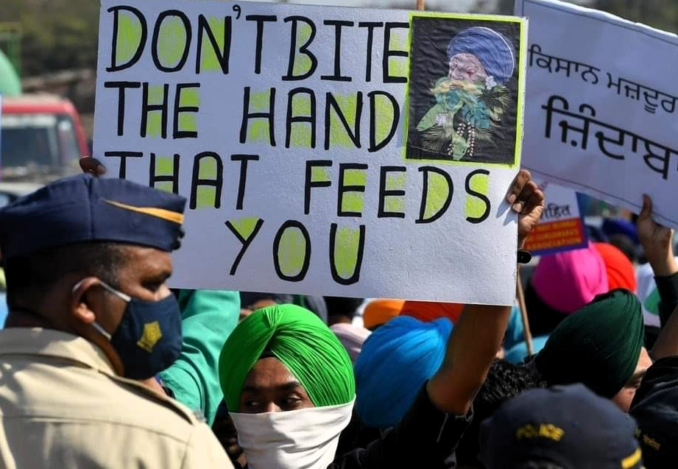 The farmers’ crucial organizing strategies extend beyond direct-action measures and are evident in their capacity to maintain protest camps while tending to their harvests elsewhere. Amreek Singh, an organizer based at the Singhu border, informed Reuters that farmers are keeping rosters to “ensure that every time a group of farmers goes to harvest the wheat crop, a group of similar size joins the protests.” Singh mentioned that similar efforts are taking place in Punjab and Uttar Pradesh. (Reuters, Apr. 29)

While farmers continue to put pressure on the state to repeal the farm bills, the state persists in trying to squash the farmers’ movement. Under the guise of concern for the people’s health, Agriculture and Farmers Welfare Minister Narendra Singh Tomar requested that the farmers end their protests to diminish the threat of COVID-19 outbreaks.

The farmers refused and remained determined to continue their campaign until the state gives in to their demands. Additionally, protests have taken COVID-19 precautions by providing masks to demonstrators, disinfecting protest sites and establishing handwashing stations.

In May, after India’s government received severe backlash for how it is handling the COVID-19 crisis, India’s leading political party, the fascist Bharatiya Janata Party (BJP), issued a misleading statement claiming the farmers’ protests were responsible for the pandemic’s second wave.

BJP stated that the “[l]atest data actually suggest that Punjab, the epicenter of ‘farmer protest’ was the origin of the second wave!” (BJP Twitter, May 13). The state’s governmental apparatus is not the only sector attempting to diminish and weaken the farmers’ movement.

Farmers organized a protest May 16 against Chief Minister Manohar Lal Kattar, a member of BJP, while Kattar was in Hisar to inaugurate a new COVID-19 hospital. As demonstrators made their way to Hisar, police set up barricades and attempted to prevent demonstrators from protesting. Police attacked farmers with batons and tear gas.

The farmers were able to breach the barricades and threw stones at the police in self-defense. (Scroll.in, May 17) During the incident, the police arrested 350 demonstrators and charged them with attempted murder for allegedly attacking law enforcement officials. Afterwards the farmers blocked all highways in Haryana for two hours and protested outside of the Hisar police station until police released all who were arrested. (Sandeep Singh, Twitter, May 24)

On June 11, Samyukta Kisan Morcha, an umbrella body of over 40 farmer unions, announced they will organize sit-ins at Raj Bhavans, official residences of the governors of India, across the country on June 26. This day commemorates the farmers’ seven months of continued and committed acts of resistance against the state.

Solidarity with the farmers in India! Build a workers’ world!