In response to the U.S.-backed Israeli bombing of Gaza and the ongoing dispossession of people in Jerusalem’s Sheikh Jarrah neighborhood and across Palestine, Palestinian unions have called for global labor solidarity to disrupt apartheid Israel’s trade. Global uproar against the Israeli regime’s war, occupation and acts of terror and exploitation is growing. 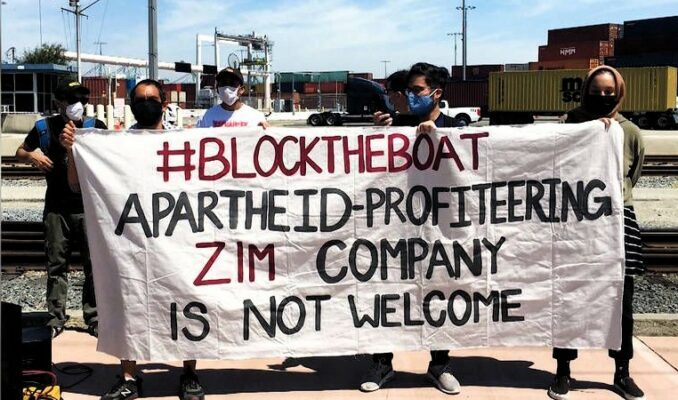 A ship belonging to Israeli shipping company ZIM has been anchored in the Port of Seattle for 11 days — June 2 to June 13. Facing community pickets from the pro-Palestine Block the Boat movement, it hasn’t had any cargo loaded or unloaded.

On June 12, 250 Block the Boat activists shut down Pier 18 after the ZIM ship made a move and came into the SSA Marine Terminal. They had the cooperation and solidarity of the International Longshore and Warehouse Union.

Block the Boat held a rally June 13 next to the port to demonstrate its continued vigilance, and still no move was made to load or unload the ship. But ZIM refuses to leave Seattle, even after losing millions of dollars in trade.

“We want the Israeli ZIM ship out of Seattle, because we don’t tolerate companies that profit from human rights violations,” said Aisha Mansour of Falastiniyat, a Palestinian feminist organization coordinating local actions. Other leading organizations include Anakbayan Seattle, International League for Peoples Struggle and End the Deadly Exchange.

The struggle continues, as the Block the Boat solidarity activists have shown resiliance.