May 23 — The general strike against anti-poor “reforms” in Colombia is finishing its fourth week. So far, every test of strength has shown popular support has grown in defiance of police and fascist murders and beatings of protesters and the threat of COVID-19, which has already killed 85,000 people. 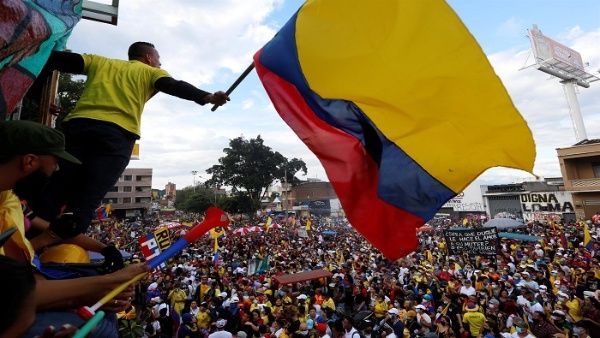 A May 19 national demonstration that brought out massive actions in all cities “exceeded all expectations,” according to a May 20 article from Colombia in rebelion.org. The National Strike Committee has called for further mass protests May 25 and 26.

While the May 19 protests were basically peaceful, the Colombian state continues to rely on force and violence in its attempt to crush the strike movement. What is impressive is that the broad movement has continued to challenge that repressive state.

The big question is whether the strike movement can continue to grow and defy the militarized police, riot police (ESMAD) and the military itself. Will it challenge the rule of what Colombians call the narc-oligarchy and its U.S. imperialist backers? By narc-oligarchy, they mean the entanglement of narcotics capitalists — who have their own armed groups — with the rest of Colombia’s superrich.

Challenging the state power seemed impossible before the strike began April 28. Economic shrinkage over the past year due to COVID-19 closing much of the economy, however, had already had its impact. It drove large sections of Colombia’s 50 million people into poverty, including many members of the middle class.

Thus a much larger section of the population, including millions of youth who seem ready to risk all to confront the government, are shouting “Chao Duque.” That is, they’re saying goodbye and good riddance to rightist President Iván Duque. And they risk their lives daily to fight for this result.

Such a challenge not only affects the Colombian superrich, it threatens U.S. imperialist interests in South America. Colombia’s military is Washington’s most powerful and useful tool for intervention on the continent. The U.S. has seven of its own military bases in Colombia. In addition, the Pentagon trains and arms the Colombian Army, and Washington depends on this force to intervene directly against its neighbors.

In 2019 the Colombian Army actively joined the U.S. attempt to destabilize and overthrow Venezuela’s government, with the goal of replacing it with one led by U.S. puppet Juan Guaidó.

Since less than 5% of workers belong to unions in Colombia, for this general strike to succeed, broader forces must join the uprising. They have. Youths in the informal economy, neighborhood committees, farmers, Indigenous peoples, Afro-Colombians, even self-employed and small business people, all with their own usual organizations, have brought the struggle to a higher level.

What set off the strike were the Duque regime’s four “reforms,” which attacked the interests of workers and Colombia’s poor people. The most blatant was the regressive 19% Value Added Tax — a sales tax — on purchases of goods and services. The reforms would drive millions more into poverty.

Before the May 19 national action, the strike already forced the government to cede — verbally — on two of the four unpopular reforms, those of tax and health. Some government ministers and the police chief of the city of Cali were forced out. These concessions seemed to encourage the strike movement, which demands the end of the other two reforms — pension and labor.

They demand that the police and army stop persecuting the demonstrators, set the arrested people free and account for anyone missing. More and more, the mass anger is turning against the very existence of the militarized state ruling Colombia’s 50 million people.