Workers at McDonald’s in 15 cities across the country went on a coordinated strike May 19 to demand a livable wage. They struck in Los Angeles, Oakland and Sacramento, Calif.; Miami, Tampa and Orlando, Fla.; Chicago; Detroit and Flint, Mich.; Kansas City and St. Louis, Mo.; Houston; Milwaukee; Raleigh, N.C.; and Charleston, S.C., a day ahead of a McDonald’s shareholders meeting. 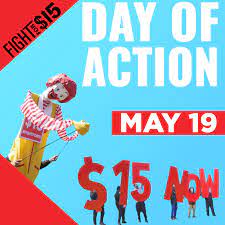 Thousands of McDonald’s workers in these 15 cities left their job sites, gathered in front of their restaurants and held signs demanding better wages and working conditions. One location had someone dressed up as Ronald McDonald on the picket line with the workers.

In California, multiple actions, including a march and caravan through Los Angeles, were led by workers carrying signs in Spanish and English demanding a $15 wage. These workers demand the passage of AB257, a California bill that will create a Fast Food Sector Council to better shape workplace standards of fast-food workers and give them more of a voice.

Striking workers led a march down the streets of St. Louis, demanding $15 an hour wages and a union. Joining the 15-city strike announced in advance, Fayetteville, N.C., workers went out and held a march, chanting for $15 wages for all workers, not just the 5% who work in corporate-owned stores. In a public relations stunt, McDonald’s recently raised the pay for only that small percentage of its workers not employed by restaurant franchisees.

The strikes were largely led by Black and Brown workers, who face not only low wages, but racism on the job. The Fight for $15 struggle has been waged by McDonald’s workers since 2012, when $15 was more of a livable wage in some areas. Although inflation and the rise of profits since then have made a $15 minimum wage obsolete, it would be a major step-up from the measly $8.65 in Florida, or the abysmal $7.25 in Texas and many other states.

McDonald’s, with its cheap hiring gimmicks promoting a “bright future” and attempted co-optation of the Black Lives Matter movement with its “promise” to fund Black futures, has a long history of exploitation of the 200,000+ workers it employs worldwide. Though it claims to offer excellent career opportunities, McDonald’s workers are overworked, underpaid and neglected while on the job.

During the height of the COVID-19 pandemic, workers at an Illinois McDonald’s had to go on strike just to get masks. (abcn.ws/3bBXs6V) Shifts are long with few to no breaks; and on top of that, when you do go on break, you have to pay to eat the food that you assemble and serve.

Workers suffer injuries on the floor, and sometimes first aid is not available. They are expected to come in sick, and then there is the verbal and sometimes physical abuse hurled at workers by arrogant, angry customers. These conditions take a physical and mental toll on workers at any fast-food restaurant or restaurant of any kind. All this for $7.25 or $8.65 an hour? It is nonsense. Criminal even.

It’s time to put the anti-living wage arguments to bed, once and for all.

Anti-living wage advocates bellow on and on about how if McDonald’s is forced to pay a living wage, then prices will go up; profits will fall, and eventually the company will just phase out workers for robots or computers.

None of these arguments are even remotely accurate.

Workers World Party Founder and late Chairperson Sam Marcy accurately wrote 40 years ago in “High Tech, Low Pay”: “In almost all of the service industries . . . there is a growing preponderance of new, low-paid workers,” while at the same time, “the individual capitalists are driven to substitute laborsaving machinery for workers because it gives them a competitive advantage.” This is more true now than when it was written, which can be said of predictions of many Marxist thinkers and revolutionaries.

McDonald’s sales increased by almost 5% in the third quarter of 2020, during the height of the pandemic, while McDonald’s earned $5 billion in profit last year. So they would not be hampered from making profits by increasing their starting wage to $15 or even $25, which is becoming more and more a reasonable wage as the cost of living increases everywhere. But capitalists want to maximize profits by keeping wages as low as possible. (on.wsj.com/3wgTNmP)

McDonald’s has much to answer for in the mistreatment, neglect and exploitation of their workers. This 15-city strike, mobilized by incredible workers, adds another question the company must answer: “Can you afford to lose us?”