On May 20, Department of Homeland Security Alejandro Mayorkas released a statement that Georgia immigrant rights advocates, current and former immigrant detainees were overjoyed to hear — the Irwin County Detention Center in Ocilla, Ga., would close “as soon as possible.” 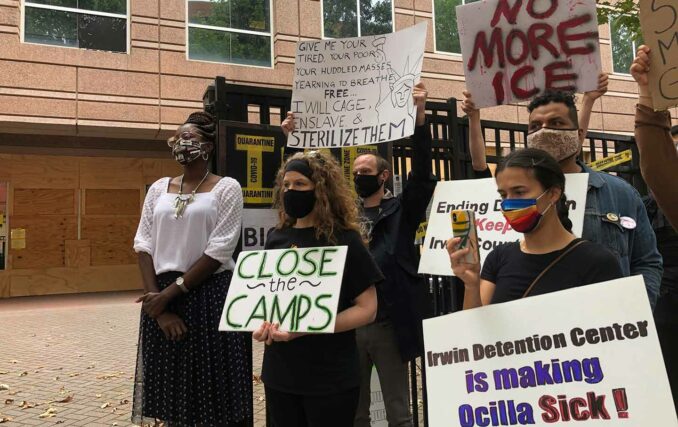 Operated by for-profit corporation LaSalle Corrections, which runs detention facilities elsewhere including in Louisiana and Texas, Irwin’s ill treatment of detainees has produced multiple lawsuits claiming injuries and deaths. Georgia Detention Watch, a coalition of legal, community and immigrant activists, had exposed numerous violations of detainees’ human rights in the facility for several years, with no apparent federal response.

Located in southern Georgia, about 200 miles from Atlanta, the 1,200-bed-capacity center held both men and women immigrants. Serious issues of medical neglect, unsanitary living conditions, inedible food, overcrowding, punitive use of solitary confinement and indifferent, if not callous and racist, treatment by Irwin personnel led to protest actions inside and outside the facility.

In September 2020, nurse Dawn Wooten bravely took action and blew the whistle on Irwin management, publicly calling them out for failure to heed COVID protocols including providing PPE, such as masks, and testing for detainees as well as staff. At a press conference in front of ICE headquarters in Atlanta, hosted by Georgia Detention Watch Sept. 15, Wooten spoke of the gynecological procedures performed on women without informed consent. These involved unnecessary or unwanted hysterectomies.

This bombshell news was followed by over 40 women filing a federal lawsuit, not only claiming medical abuse by Dr. Mahendra Amin, but retaliation by LaSalle employees at Irwin against those who told their stories. Some women were quickly deported, while others were moved to detention facilities in other states. More demonstrations took place in Atlanta and Ocilla, declaring “Believe the Women” and “Shut Irwin Down.”

Federal Congressional hearings took place, and a delegation of elected representatives met with detainees. Early in 2021, women started being transferred from Irwin to Stewart Detention Center, an all-male facility, in Lumpkin, Ga.,  operated by CoreCivic. Stewart has its own long, egregious history of violations, including detainee deaths from COVID and other forms of medical neglect.

When President Joe Biden came to Atlanta April 29 for a rally marking 100 days in office, he was interrupted by a group of former detainees from Irwin and immigrant advocates, chanting and carrying a banner demanding “End Detention Now.” Biden was forced to repeat his campaign promise of shutting down private detention centers and asked for “five more days.” Security then removed demonstrators from the rally.

Mayorkas’ statement declares that “detention facilities and the treatment of individuals in those facilities will be held to our health and safety standards,” indicating that those who fail those standards will see similar action.

Detainees know if that were true, they would have all been closed May 20.