May 23 — As the global conflict centered in their country enters the 11th year, Syrians are preparing for May 26 national elections. Thousands of citizens displaced by war and U.S.-imposed sanctions have already cast their ballots in Lebanon, Iran, Turkey, the United Arab Emirates and elsewhere round the world.

President Bashar al-Assad, reelected in the last round of presidential elections in 2014, stands for reelection as the head of a coalition government, led by Al-Assad’s Ba’ath Party, which includes the Syrian Communist Party.

All opposition groups which have agreed to not engage in armed struggle to overthrow the government may participate in the elections, and the government has even welcomed Syrians who had previously taken up arms, to “exercise their electoral right” to “determine the future of Syria.”

An international delegation organized by Arab Americans 4 Syria and the Syrian Solidarity Movement arrived in Damascus late Sunday night, May 23, to assist in monitoring elections. The delegation includes representatives from the International Action Center and Anti-War Committee. Workers World will be publishing on-the-ground updates throughout the election week. 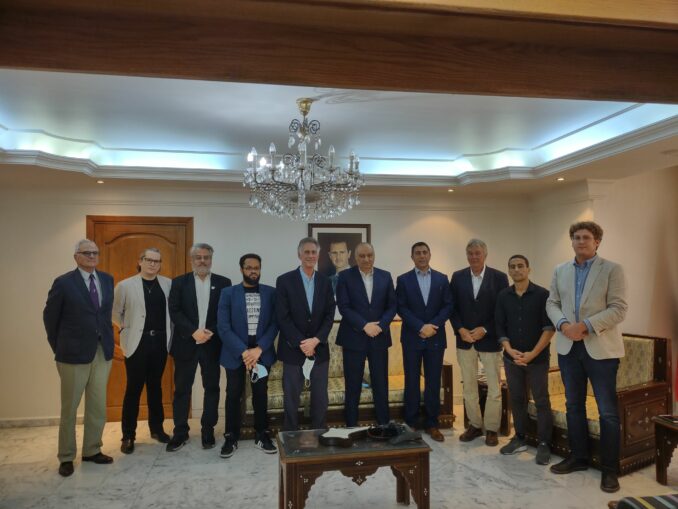 Minister Imad Abdullah Sarah told the delegation, “We do not tell the media what to say. But we just ask that they try to be objective.” He lamented that U.S. media outlets have used the access they’ve been granted to distort the truth to favor U.S. State Department narratives.

Minister Sarah joked, “When the New York Times comes to Syria, I want to ask them, ‘Okay, how many of you are working for the CIA?’” He said that in one case, a reporter staying in Damascus reported as if he were on the ground in Aleppo. That city is 100s of miles to the north near the Turkish border, which the U.S. audience would be unlikely to know.

“We are a small office, a small staff,” he said, without the resources to counter the massive propaganda campaign launched by billionaire-owned U.S. corporate media.

Describing the sanctions that have strangled Syrian industrial and financial institutions, the minister said people must understand how much damage has been done over the last decade. Syrian pharmaceuticals, once a major sector of industry, have been ground to a halt, because critical components can no longer be imported.

Aviation equipment, for another example, must be retrofitted and recycled since they can’t be imported. But the most devastating effect of international sanctions, he said, falls not on President Assad, not on the government, but on the people. Over a million people in al-Hasakah province are going thirsty as sanctions restrict even water access.

He expressed the Syrian people’s affection for the people of the United States. He cited the state murder of Black people, mentioning George Floyd by name, as a way of expressing understanding that the U.S. government does not represent the interests of the people living there.

The author represents the IAC on the delegation of election observers.