Writing from Colombia, the author describes the national pro-strike protests called for May 19 as historically enormous and successful. The article was published on his blog and by rebelion.org. Translation: John Catalinotto

May 20 — The mobilizations that began in Colombia 22 days ago — and for which the city of Cali became a national focus — are paying off with the thunderous fall of two ongoing reforms: the tax and health reforms. At the same time the popular classes are warning the government about a new uprising, should it insist on keeping pension and labor reforms [which are attacks on the working class]. 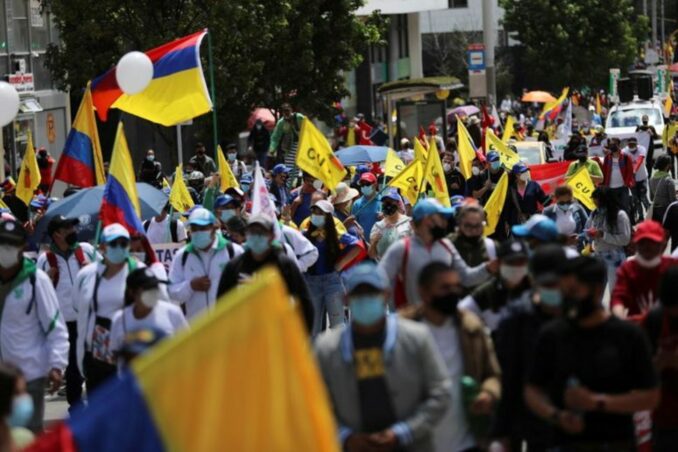 It is the longest strike in the history of the country, greater in strength and participation than the one carried out September 14 and 15, 1977. In order to reduce the impact of the protests, then-President Alfonso López Michelsen described the day as subversive. His label did nothing more than heighten the mood and make the popular mobilizations more dynamic. At that time, the workers won their demands.

When the strike ended, the workers called it a victory. Although some described it as inconsequential, the minimum wage rose three times in the following eight months, while wages in industry rose 16 percentage points.

Colombia on the move

The marches in Colombia that support the National Strike in response to the expectations of the National Committee that organized the activities are increasingly numerous. The one on April 28 was spectacular, but the one held this Wednesday, May 19, throughout Colombian territory, exceeded all expectations.

In the midst of the mobilizations, news about the fall of the health reform gained strength. And even though the hot sun seemed to melt the asphalt, every worker, student, Indigenous, community member and member of the different popular groups, found the courage to advance. “We did it, we did it,” they cheered while, in the background, in the sound vehicles, the anthem of the Paro could be heard: “Duque chao, Duque chao” [Goodbye President Iván Duque].

Contrary to what the national government predicted about riots and new vandalism, May 19 was a day with a historic milestone: Everything took place in a peaceful environment.

Finally, it should be noted that Colombians took to the streets, despite President Duque’s announcements of a military intervention to recapture the blockades and resistance points.

But unless there is an efficient and effective negotiation with the national government (allow me to doubt it, because from my perspective Duque is a snake charmer), the mobilizations will continue and, fueled by discontent, with more force.