The following interview with Palestinian activist and author Susan Abuhawa was conducted by Ted Kelly, May 3, 2021. 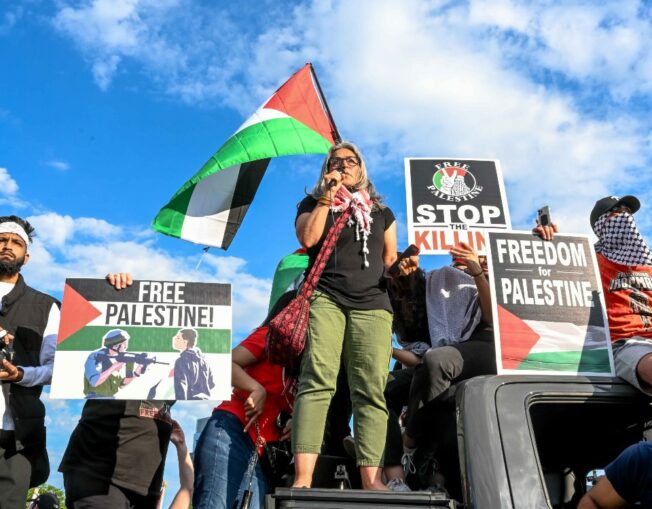 Abulhawa speaking at rally for Palestine in Philadelphia, May 15. WW Photo: Joe Piette

Susan Abulhawa: Recently five or six young Palestinian boys were kidnapped and arrested; you know, just terrorized. They were young; they were babies, and they were targeted because they were picking wild za’atar, wild herbs. This is actually part of our tradition. Palestinians have been foraging for za’atar and meramiyeh for thousands of years.

Nobody has harmed that landscape more than the Zionists. You can see it in the way they build their homes. They literally decapitate the hills. Palestinians never built that way; Palestinian homes are built on the sides of hills and in the valleys to conform to the landscape, not the other way around. Israel makes the land conform to their desire.

If you’ve never seen a hill being decapitated, it is such a violent act. The hills are covered in trees, so all those trees are destroyed. Consider how many animals depended on those trees as their habitats and for their sustenance, all of that’s gone. There’s just zero respect for the land.

From its inception Israel devastated the water. One of the first things they did was to drain the Hula [Valley] wetlands. That was considered “Zionist ingenuity.” They touted it and went on and on about what geniuses they are. They drained the Hula wetlands. They call it the Hula swamps.

It was actually a massive ecological treasure that was home to hundreds of bird species, of frog species, fish, flora — many of which have become extinct, because they were unique to that region, which was a huge migratory station. They drained the wetlands to establish settler colonies, but they didn’t understand the land. So there were all these natural processes that happened, that ended up leading to subterranean internal combustion that basically made it impossible to build their damn houses there. They had to end that project, but the wetlands were destroyed. There’s a tiny bit left that’s a fraction of its former glory.

The Zionists were Europeans. They’re trying to make the land European. And so they brought all these European, non-native trees — a lot of pines and firs that basically destroyed the ground vegetation, because pine needles are acidic and ultimately made the whole thing a tinderbox. That’s why they had those massive forest fires a few years back.

And not to mention the way that they have scarred the land with that hideous wall. But at the same time, they do all this greenwashing and all these Western newspapers and media outlets are complicit in it.

WW: Similar ecological destruction happened in North America. The European settlers came here not knowing how to cultivate food on their own. They needed to learn that from the Indigenous people. They tried in many ways to force the natural environment to behave more like a European environment. But there’s still this pervasive myth that Israel is not a European colonial project.

In order to colonize a place, you can’t come just with brute force, right? You have to have a whole set of mythology to make the people, to make colonizers feel righteous about murder and plunder.

In North America, there was Manifest Destiny. There was a divine aura to it all. It was destined; people were escaping persecution to come here. They were coming here for a better life. And the current inhabitants weren’t even viewed as the current stewards of the land or even worthy of the land. God was not on their side — all of these things, so it makes it palatable to the average colonizer.

Presumably the people coming here weren’t these evil monsters, right? They were people in search of a better life. But they became colonizers. They became monsters. They were adhering to mythologies that made sense to them. And the same thing is happening in Palestine.

The original Zionists were Europeans who very much had that European colonial mentality. They looked at the East as backward, inferior and unworthy. They decided they wanted to have their own Jewish colony somewhere — the Jewish state.

Most of them were atheists, by the way. So this was never a religious thing. This was always about power. It was always about colonialism. Because of European anti-Semitism, they didn’t have the access that they wanted. They wanted their own special piece of the pie. That’s the origin of Zionism.

They had nothing to do with Judaism. Of course, they looked everywhere. They looked in Uganda, Argentina, Ethiopia and Palestine. It was never about “returning” to Palestine, but Palestine made for a better myth.

All the other places were a little bit too raw and too wild, whereas Palestine was small enough. It was built-up; it had an infrastructure — it had homes. It had a history. It had water. It had, you know, a Biblical aura. It had everything they needed to create the other really potent aspect of colonialism, which is the mythmaking.

Judaism had roots there. Judaism also has roots in Egypt and in Iraq and in Persia. They could have manufactured the same thing in any of these places. But Palestine made for an attractive place for many reasons, particularly the fact that it was under British mandate.

The British enticed Jews, especially following World War II, who were coming for a better life — to come and take up arms and become the same monsters that they escaped from. I don’t care what people say. Israelis have become the modern-day Nazis. I get that people don’t like to hear that comparison. But I don’t know how else to say it.

Their entire society wants to kill us. They want us gone. They look at us as inferior. They have no qualms about murdering us and killing us and beating our children and demolishing our homes or stealing our homes like they have zero moral compunctions about it.

And the only reason is because we’re not Jewish. Because we were there before they came.

WW: There are many comparisons made between Palestine and South Africa. Do you think “apartheid” is a helpful term?

Yes and no. It’s a recognizable historic moment. So you say the word apartheid, and people have a context already. They understand it was a really evil system. And so you don’t have to start from scratch.

Palestinians have been describing this system to the world for years. Decades. Nobody’s listened to us. I want to stress that this isn’t something new. The way that apartheid in Israel is being talked about is like it’s something that is new that developed over time because of right-wing governments. But from the very beginning, they wanted to get rid of us. From the very beginning, they hated us.

They wanted to, in the words of Ze’ev Jabotinsky, “sweep away the Orient,” in the same way that white settlers tried to destroy Indigenous cultures. When they couldn’t destroy the cultures, they certainly committed genocide. That was the original intent.

But in new generations and identity politics, there has been this desire to “indigenize” themselves. They don’t want to be seen as colonizers. They want to be “Indigenous.” So suddenly they “created” falafel. They have their own “indigenous cuisine,” which is basically Palestinian cuisine.

They’re stealing our clothing; they’re pretending like it’s Israeli in their fashion shows. They’re even appropriating the keffiyeh, making a blue-and-white keffiyeh. And they’re claiming our archaeological heritage. They have been raiding graves in hundreds and thousands of years-old cemeteries, Muslim cemeteries especially, because they want to erase us. They’re threatened by our presence. And you didn’t see that in South Africa, that didn’t exist.

WW: Your research also found that Israel is the worst exporter of weapons globally, per capita.

SA: Israel was consistently the no. 1 exporter of weapons in the world per capita, exceeding the U.S. by a huge margin, exceeding Russia, exceeding China, France, Italy. I did the research and examined a 10-year period. I got the information from SIPRI, the Stockholm International Peace Research Institute, that basically tracks all weapons transactions across the world and especially in conflict situations.

All of Israel’s weapons transactions are only known indirectly because of the disclosure by the recipient countries. However, they have been one of the biggest subversive weapons hustlers, especially in regions or in conflict situations where there are international bans on weapon sales. When there were weapons embargos against South Africa, Israel was arming them. When the military mowed down all those kids in Soweto, those were Israeli-supplied weapons.

They sold nuclear technology to the Apartheid government. The extent of Israel’s collusion with South Africa was actually quite shocking. There’s a really good book called “The Unspoken Alliance” by Sasha Polakow-Suransky, which is worth a read for anybody who wants to see the level of Israel’s collusion with them. But it wasn’t just South Africa; Israel supplied weapons to Rwanda.

WW: Regarding Gaza, what do you think about the term open-air prison? Is that accurate? What does that really mean in practice?

It is a prison. Probably the biggest prison in the world. People aren’t allowed in or out. They are violated in a million different ways, but it’s more than that. It’s not just a place to warehouse people. They have made it into a laboratory, a weapons testing ground.

Whenever they launch a quote unquote “war ” — it’s never the word “genocide” — stocks just skyrocket, because that’s where they test all their new stuff. And it allows them to put this “field tested” label on their weapons. Literally, they market their weapons as being field tested, which means: “We use this on Palestinians, and it murdered them effectively.” And that’s what it’s about. It’s economic as well as political and social. And one thing that it’s not about is Israeli security. That’s what it’s not about.

Capitalism is a cancer, and colonialism is just an extension of capitalism.