During the course of the COVID-19 pandemic, Cuba’s Henry Reeve International Medical Brigade sent 53 contingents of volunteer health workers to over 40 countries — in addition to Cuban medical personnel already working in 58 countries. And more than 45 countries requested Cuba’s Interferon Alpha 2B protocol to use for treatment of seriously ill COVID patients. (Granma, Nov. 23, 2020) 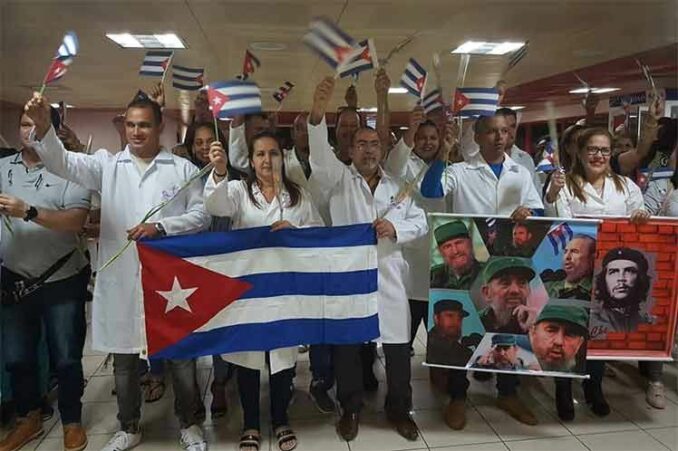 Cuba has developed five internationally recognized candidate COVID-19 vaccines, two of them now in Phase III clinical trials: Soberana-02 and Abdala. Cuba plans to produce 100 million doses of low-cost vaccine, safe to store at room temperature for weeks, and has arranged to expand its scale of production with agreements with Venezuela and Iran. The 100 million doses will cover their population of almost 11.5 million and, in contrast to the rich countries’ hoarding of life saving vaccines, provide vaccines to poorer countries in Africa and Latin America. (Workers World, April 26)

Cuba regularly exports hundreds of millions of vaccines to other countries. Global distribution of Cuban COVID vaccines will be tracked through COVAX, with the World Health Organization, and the Coalition for Epidemic Preparedness Innovation. (Reuters, Nov. 12, 2020) Dr. Jose Moya Medina, Cuba’s representative to the Pan American Health Organization (PAHO), said, “Cuba’s contribution with its vaccine could be very important for certain vulnerable groups in our region” from rural and remote Indigenous communities to the elderly.

Biotechnology and Pharmaceutical Industries (BioCubaFarma) President Eduardo Martínez said Cuba intends to present a diversified portfolio of vaccines, which will help match the needs of different population groups. BioCubaFarma is Cuba’s state-owned network of 34 companies and scientific institutions which coordinate a planned, societywide approach to pharmaceuticals and vaccines. Cuban biotech development has been a priority since the 1980s due to the criminal U.S. blockade, which cut off access to medical supplies and innovations to the island.

Vaccination in Cuba will be voluntary; yet decades of free health care, free education and extensive public health campaigns ensure high levels of coverage. All Havana is set to be vaccinated by the end of May, 60% of the rest of the country by August and the entire island by the end of this year.

In the Special Period after the loss of trade with the Soviet Union and Eastern European socialist countries, Cuba increased resources to the biopharmaceutical industry. However, in 2019 former President Donald Trump invoked Title III of the Helms Burton Act, further tightening the illegal blockade’s economic war against this small island. And the U.S. blockade impacts Cuba’s ability to acquire syringes to distribute the vaccine — there is a shortfall of 20 million syringes to vaccinate the Cuban population against COVID.

In response, the Cuban solidarity network in the U.S. and Canada is in motion to help buy the 20 million syringes needed to cover the shortfall. The initial goal is to raise $100,000 this month and start rushing syringes to Cuba.

Socialist Cuba has shown the most international solidarity with the peoples of the world of any country from fighting South African apartheid forces in Angola in the 1980s to sending the first medical personnel volunteers to fight Ebola in West Africa in 2014 to planning to help vaccinate the world. Cuba needs our solidarity in the pandemic now. The Saving Lives Campaign and Global Health Partners are building a broad-based, urgent drive to supply these vital medical tools to Cuba to put life saving vaccines into Cuban arms.

To show your solidarity with the revolutionary Cuban people, please make a donation to Global Health Partners, which has a U.S. Commerce Department license to send medical supplies to Cuba. You can make an immediate donation online at ghpartners.org/syringes4cuba/. Or send a check payable to Global Health Partners, 39 Broadway, Suite 1540, New York, NY 10006, with the check memo: Syringe Campaign.