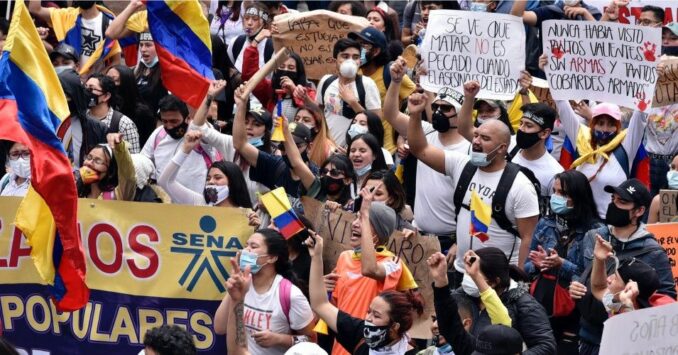 Reports from Colombia May 17 state the national strike that began April 28 continues and a national mobilization has been called for May 19. The strike has growing mass support from diverse sectors of Colombian society, despite vicious state and private death-squad repression that has killed at least 50 people, wounded more than 500, imprisoned over 1,500 and disappeared over 500. This statement of the Revolutionary Armed Forces of Colombia — People’s Army (FARC-EP) represents a revolutionary view concerning the national strike and explains why they believe — five years after a peace treaty was signed — it is necessary to pick up arms again.

The Western Coordinating Command on behalf of the structures that make it up salutes the Colombian people, the social organizations, but also groups of friends, clubs, etc. This shows that the level of mass consciousness exceeds the organized social structures and that the people are enraged by the cynical economic and political measures that the illegitimate “President” Iván Duque has tried to implement. Duque is simply carrying out the orders of his bosses: the International Monetary Fund, the World Bank and U.S. imperialism.

We stand in solidarity with all those who have lost their families, who have been beaten and injured at the hands of those who proclaim themselves the guarantors of human rights and international humanitarian law (these are the same people who believe that all dissidents are criminals and should be treated as such). We cannot remain silent or tolerant when we see a pack of members of the Esmad [U.S.-trained anti-riot squad] or the police killing protesters with clubs and bullets,  merely because protesters demand education for their children and raise complaints against the injustices of the state.

We are people in arms because we are faithful witnesses that democracy in Colombia only exists on paper; we are people in arms because we know that the only way to make ourselves heard is by this means, and there is no other because they have closed the doors to an agreed solution — because every time we went out to express our disagreements, we were massacred, humiliated, imprisoned, disappeared, outraged by the Esmad squads and the police. We are the people in arms because we are aware that the people are sovereign and that the popular power trumps their rulers, but this stateless and criminal oligarchy does not look beyond their interests; they do not care how many innocent people they have to kill in order to satisfy their thirst for wealth and power.

Today more than ever, the struggle of the FARC EP is just and necessary, and we will not give up until we see the structure of this Santanderist state which sells out the homeland destroyed — and to be able to establish together with the people a sovereign, inclusive, fully democratic, just and truly patriotic government, a government where the people make the strategic decisions of the nation, where the police become an entity preventing crime and not an anti-popular force of repression, where there are no mercenaries but patriotic soldiers committed to the defense of the people.

In other words, we want that dignified Colombia, of the people and for the people, and not the Colombia of today, which is that of the minorities who apply death and blackmail to defend the interests of the rich without considering the suffering of the poor, who are the families of all those soldiers and policemen who, regardless of the justice of the struggle, do not mind killing to defend a miserable salary. That scaffolding of corruption that steals the wealth and forces us to pay tribute sacrificing the food of our children must fall. We are glad that the mobilizations these days are going in that direction.

Demands to the soldiers

We call on all the military and police forces to stop massacring their people — do not let yourselves be used by their oppressors. Arms should be used against the armed, not against the defenseless dissidents.

Do they [soldiers and police] believe that by killing their Colombian brothers they are excluded from the tax, pension, labor and health reforms? Do they believe that by defending the institutionality and the interests of the transnationals and the oligarchy, their standard of living will improve?

Do not delude yourselves; do not play the game of the oligarchy anymore. Your commitment is with the people, and those you are killing are fighting for your well-being and that of your family.

The time has come for all of us to put a grain of sand, to take a small step in the streets for this just cause and to make this corrupt government fall, to demand that the congress members lower their salaries and to reform the legislature and establish a unicameral system or one representative per department, to put an end to tax havens and to demand that whoever has more capital should pay more taxes. In this way, the fiscal deficit will be corrected, and Colombia’s economic stability will be reestablished.

The Attorney General’s Office, in its eagerness to stigmatize the mobilization and justify the great massacre that the military and police forces have carried out, follows the repetitive script, linking us with the mobilization, creating false profiles on social networks from which they disseminate information in our name alluding to the strike, taking out false pamphlets forcing people to go on strike and very possibly try to make military presence in sites where masses are concentrated wearing our insignias.

They have done this with the undeniable presence of armed civilian personnel in demonstrations, agents previously trained by the police; this is how the cowards act in the face of the fury of the people. They cannot expect the people to remain immobile in the face of barbarism. It is the people raised up against injustice who are the protagonists of the coming change; the people have begun the march of no return for a new homeland, and this just march will not be stopped by anyone.

Coordinating Command of the West FARC-EP