Workers World Party condemns in the strongest terms the genocidal assault by the Zionist Israeli military on the people of Gaza — called the largest open-air prison in the world and located in Occupied Palestine. This latest battle is yet another tragedy in the ongoing displacement of Palestinians from their land by Zionist settlers. 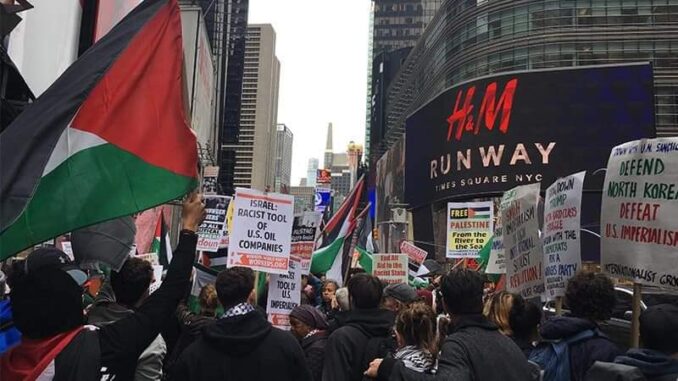 This assault comes during Eid Mubarak, signaling the end of Ramadan for millions of Muslims around the world.

WWP adds its name in solidarity with organizations holding hundreds of global actions in solidarity with Gazans and the Palestinian people in general, who have been heroically battling to win back their stolen homeland for decades. (Go to samidoun.net/events/ to find a protest near you.)

As of May 14 according to AlJazeera, 122 Palestinians have reportedly been killed by Israeli air strikes, and the death toll continues to rise along with close to 1,000 wounded. The dead include over 30 children.

Israel is terrorizing residents in apartment buildings and houses day and night, under the erroneous guise of “defending itself from terrorists.” The Palestinian liberation group Hamas and allies in Lebanon have been defending Gaza by firing rockets into Israel, which in reality are no match for the Israeli Defense Forces, armed to the teeth by the U.S. government.

Israel is threatening to send in ground troops into Gaza. It was also reported by AlJazeera that seven Palestinian protesters were killed on the West Bank by IDF. 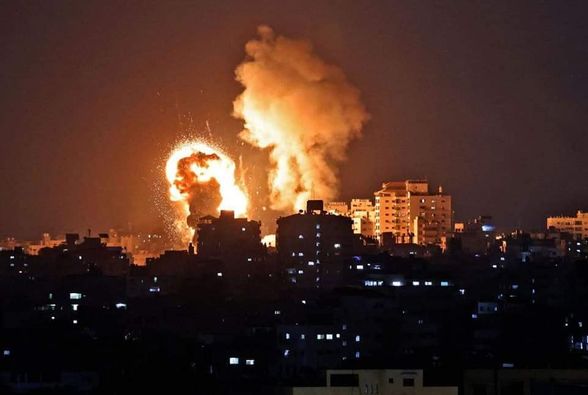 Gaza being bombarded, May 10.

It was on May 15, 1948, that Palestinians were violently displaced from their ancestral homeland through the establishment of Israel by British and other western imperialists, in order to control the oil-rich region known as the Middle East. The name for this displacement is Nakba, the Arabic word for disaster, which Palestinian people and their supporters have commemorated for the past 73 years.

Israel exists to protect the interests of U.S. imperialism — lucrative oil profits — as a military garrison state that threatens and attacks oil rich countries in the region who dare to fight for sovereignty over their land and resources.

While millions of people in the U.S. have been suffering from unemployment, hunger and the threat of evictions during the pandemic, the U.S. continues to prop up the murderous Israeli regime with $3 billion annually in military aid. Just think of the relief that amount alone could bring to the people of the U.S. if it was not used to repress and occupy a whole nation?

Just like every president before him since 1948, Democrat and Republican, President Joe Biden stated that “Israel had the right to defend itself.”

As Susie Abulhawa, a Palestinian writer and activist, told WW: “What has been happening to Gaza over the past four days is only news because Gaza is defending itself from U.S.-backed Israeli attacks. There is not an equal sign between defending oneself with firing rockets from the ground against powerful airstrikes.  There is not a day that goes by when some kind of violence is not visited upon the people of Gaza or any other part of Occupied Palestine which does not get reported by mainstream sources.”