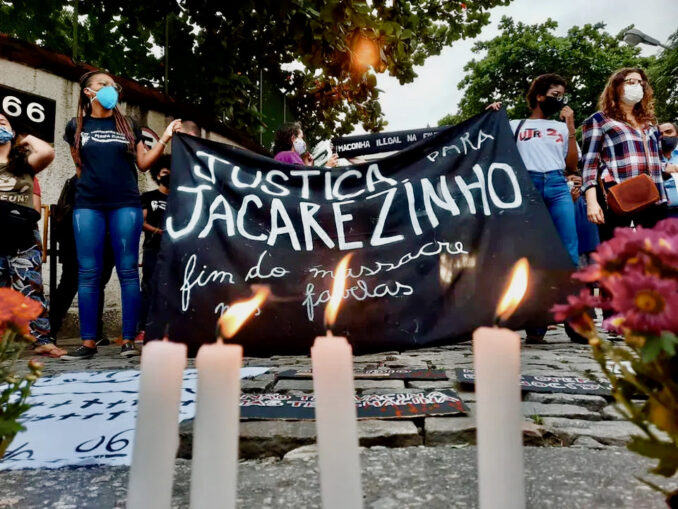 The police invaded the Jacarezinho favela (slum) in Rio de Janeiro, Brazil, at dawn May 6, armed to the teeth with bulletproof helicopters, armored tanks and machine guns to confront what they claimed were suspected drug traffickers.

When the smoke cleared after what seemed like hours of shooting, 27 young men from ages 18 to 34 had lost their lives. One police officer was among the dead. The community resembled a war zone.

Following the bloody invasion that terrified the entire community, a spontaneous protest of 100 residents took to the streets to demand: “Stop killing us.” This protest, despite small numbers, was heroic due to the rampant pandemic taking a heavy toll in the favelas and the real threat of reprisal from the police who, in reality, are death squads. The Jacarezinho community is demanding an independent probe of this bloody raid.

While the police tried to demonize the dead as drug traffickers, eyewitness reports stated that when the unarmed suspects tried to negotiate their surrender to the police, they were summarily executed on the spot or taken to family homes and killed in front of loved ones.

In the last couple of decades, at least six major police massacres have occurred in state of Rio communities, most notably the 2007 Complexo do Alemão invasion, which left 19 dead, and the 2003 massacre in Senador Camará, which resulted in the murder of 15 people. The May 6 killings were the most lethal to date.

Even before the fascistic Jair Bolsonaro became president of Brazil in 2018, police massacres in the favelas were commonplace, regardless of who held national office. The police and army — the state — protected the private property of the wealthy oligarchy.

Even under the social-democratic presidency of Luiz Inácio “Lula” da Silva, and his social-democratic Workers Party from 2003-2011, police killings took place. Lula’s government established or strengthened a vital social safety net including cash transfer to the poor, aid to small farmers, and labor and pension reforms, which improved conditions for the masses but did not stop police killings.

Bolsonaro is an extreme right-wing president — a Brazilian version of Trump — who has exhibited utter disdain and hatred for the Black and Indigenous population and who has boldly given carte blanche to the police to kill with impunity. He was once quoted saying, “A cop who doesn’t kill isn’t a cop.” (Washington Post, May 6)

In 2019 alone, police killed an estimated 5,800 people throughout Brazil, which is over five times the annual rate of police killings in the U.S. According to Human Rights Watch, from 2010 to 2020, three-quarters of the 9,000 people the police killed in Rio alone were Black men. (June 3)

Robert Muggah, co-founder of the Igarapé Institute, a Rio-based research group on trends in violence, stated: “These shootings are obviously routine in Rio de Janeiro, but this is unprecedented in that it’s the operation that has generated the largest number of deaths, ever.” He went on to say that this is “a dangerous reminder of the persistence of police violence in Rio de Janeiro and Brazil.” (Washington Post, May 6) 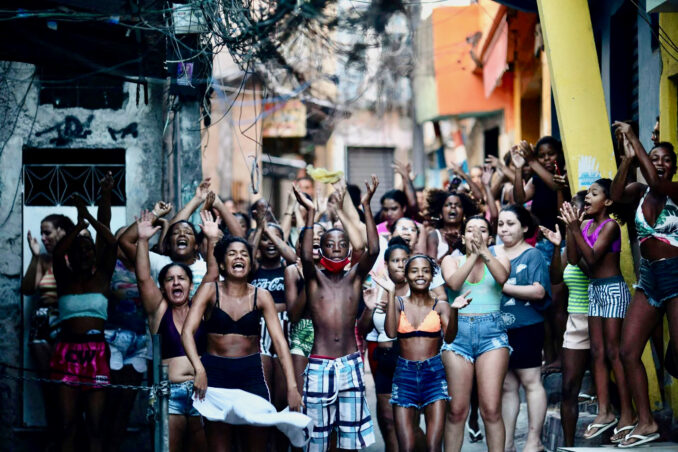 Legacy of slavery lives on in Brazil

According to Worldometers.info, Brazil has by far the largest population of any single country throughout Latin America with over 212.5 million people. Out of that number, over half consider themselves Black or Brown, making this country home to the world’s second largest Black population outside of the African continent. This is rooted in the African slave trade, which cannot be discounted in terms of the conditions being faced by the most ostracized and oppressed Brazilians today.

The slave trade existed for 350 years following the attempt at enslavement and then elimination of most of the Indigenous population there, carried out by Portuguese colonialists. At the time, 40% of the 10 million enslaved Africans brought to the Americas ended up in Brazil — 4 out of 10 captured human beings. In 1888, Brazil was the last country to abolish the slave trade.

The legacy of slavery is so deeply woven into the fabric of Brazilian society that the descendants of the colonizers were encouraged to marry and have children with Black and Indigenous people to “Europeanize or lighten” the skin color of the overall population.

It is within this historical context that the major cities of São Paulo and Rio de Janeiro, with some of the highest concentrations of people of African descent, find themselves in such desperate poverty and unspeakable repression. According to Time Magazine, while 56% of Brazilians identify as Black, they make up just 18% of Congress and 4.7% of executives in Brazil’s 500 largest companies. On the flip side of the class divide, Black people make up 75% of murder victims and 75% of those killed by police. (Dec. 16, 2020)

Also Black Brazilians, who earn 57 cents on the dollar compared to whites, are dying of COVID-19 at a much higher rate than whites, due to overcrowded conditions and the lack of nutrition, sanitation and health facilities in the favelas.

This reign of police terror instigated by Bolsonaro will not intimidate but will help build resistance by the people in the streets with demands to fund decent paying jobs, housing, food and health care — demands which will take a social revolution.