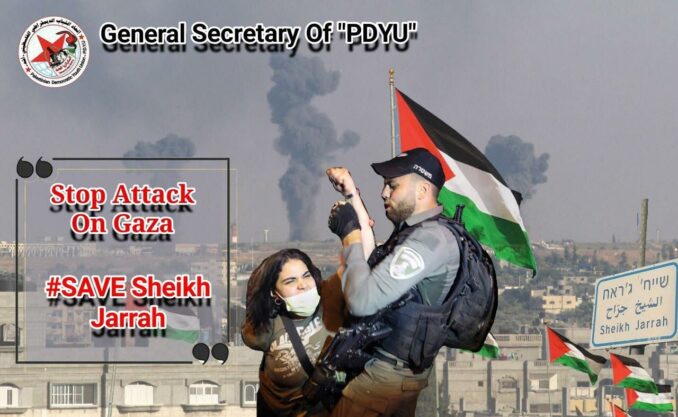 On May 12 the General Secretary of the Palestinian Democratic Youth Union issued the following statement.

The General Secretary of the Palestinian Democratic Youth Union condemns the most severe criminal attacks launched by the Israeli army, using the most powerful air force in the world, against the besieged Gaza Strip, targeting innocent civilians in homes and destroying residential apartments, which has led to the death of more than 55 Palestinian martyrs, including 14 children and 3 women, and wounding more than 320, in the context of their continuing criminal attacks against the Palestinian people in the occupied city of Jerusalem and the Sheikh Jarrah neighborhood.

The General Secretary of the Palestinian Democratic Youth Union calls on the United Nations and international human rights and humanitarian organizations to take a clear position on these criminal military operations and the killing of defenseless civilians in a wide range of international resolutions and the charter of human rights and to provide full protection for the Palestinian people.