Im/migrant-led caravans from the Pacific Northwest region came to protest the Northwest Detention Center (NWDC) in Tacoma, Wash., May 8. The Mothers Day action, held the day before, brought families from Portland and Salem, Ore., Seattle and other cities. Their cars were decked with “Free Them All” flags for their family members and others behind bars. 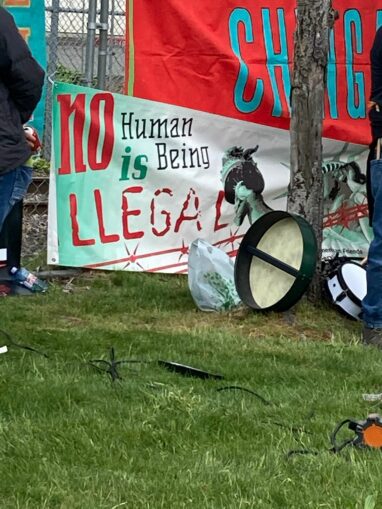 This caravan was part of nationally coordinated actions by the American Friends Service Committee. Along with several immigrant rights organizations, women’s, labor and various progressive organizations supported the Tacoma action.

The NWDC is the largest immigration prison on the West Coast and is run by the for-profit GEO Group. Prisoners are held under torturous conditions, and legal assistance is rare. This year the Washington State Legislature banned private prisons, but not until NWDC’s contract expires in 2025! But solidarity groups want it shut down now!

The COVID-19 pandemic only increases the crisis for those incarcerated, including 64 prisoners seeking refugee status who were just flown here from the Mexican border.

As drivers arrived at the prison, the caravan was greeted by Aztec Dancers. Dakota Case, a representative of the Puyallup Nation, on whose land the prison sits, welcomed the people to Puyallup territory. Caravan leaders displayed large bags stuffed with 500 letters and solidarity messages from 10 states for the people inside.

The cause of mothers, both inside and outside the prison, who are separated from their families was highlighted. La Resistencia, an immigrant detention solidarity organization, helped coordinate the rally.