The U.S. Supreme Court ruled April 22 that juveniles — those under the age of 18 — are not exempt from spending the rest of their lives in prison with no hope of parole. (See WW article, workers.org/2021/05/56175/) This once again exposes the hypocrisy of the U.S. claiming to be the most democratic country in the world. But this ruling is just the tip of the iceberg in understanding the sordid, racist history of the U.S., much of it still hidden from the majority of the masses. This ruling is an extension of the ongoing war against youth, especially youth of color, including where courts and prisons are involved. 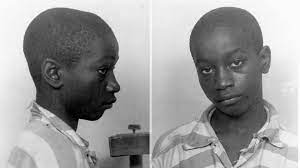 Take the case of George Stinney Jr. — a name and face that should never, ever be forgotten. The 14-year-old African American youth, barely five feet tall and weighing less than 100 pounds, became the youngest known person in the U.S. to be executed by the state in the 20th century. This atrocity took place on June 16, 1944, at the South Carolina Penitentiary in Columbia, where this terrified youth had to sit on a stack of books to be tortured to death in the electric chair.

Stinney Jr. was sentenced to die a mere 84 days after he was falsely accused of murdering two young white girls. His entire trial took just two hours with the defense attorney calling no witnesses. An all-white male jury took just 10 minutes to convict him.

Seventy years after his execution, in December 2014 Circuit Judge Carmen Mullen vacated the teenager’s sentence, exonerating him on two murder charges during a new hearing demanded by Stinney’s surviving family.

Stinney’s former cellmate, Wilford Hunter issued a statement for the hearing, testifying that the 14-year-old told him: “I didn’t, didn’t do it. Why would they kill me for something I didn’t do?” (Washington Post, Dec. 18, 2014)

Amanda Sales, a child forensic psychiatrist, testified at the hearing: “It is my professional opinion, to a reasonable degree of medical certainty, that the confession given by George Stinney Jr. on or about March 24, 1944, is best characterized as a coerced, compliant, false confession. It is not reliable.” (NBC News)

This legal lynching of an innocent child 77 years ago is part and parcel of the system that allows state-sanctioned lynchings of Black and Brown teenagers and young people, which are still carried out by police and upheld by biased courts today. In memory of Stinney, and all who have lost their lives due to the color of their skin, young people are justified in demanding “Black Lives Matter,” “Abolish the police” and “Abolish capitalism.”