It’s hard to put food on the table when you don’t have a home where you can put the table. The poorest workers in the United States — disproportionately people of color — rent their homes. During the current COVID pandemic, millions of them are at risk of losing their housing. 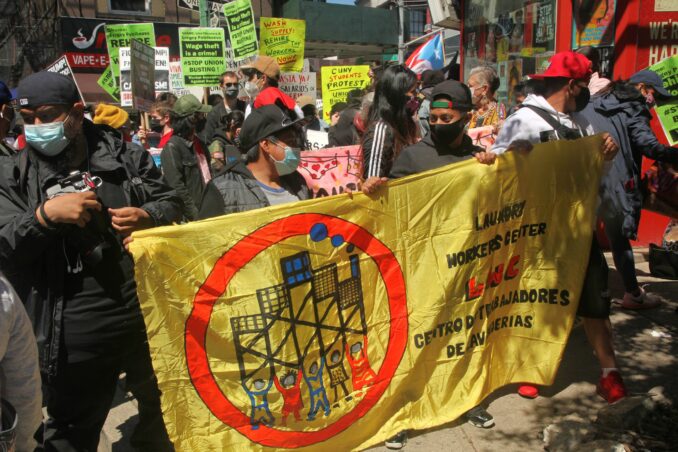 Hard to say which estimate is accurate — but all indicate that millions of people are at risk of losing their housing.

There are a plethora of programs designed to protect tenants from eviction, from the ban to ensure public health placed by the Centers for Disease Control and Prevention — just declared illegal by a district court judge — to a ban on evicting people from federally assisted public housing, as well as various bans by states, counties and cities.

Both the Cares Act that Trump signed in March of 2020 and the recent American Rescue Plan Act of 2021 provide funds for communities and states to create rental assistance programs to forestall evictions.

Even with these programs — which have intricate application processes, exemptions and income requirements — evictions still took place. Some evictions were unofficial — landlord thugs removing a tenant by force — and some took place legally when tenants could not vigorously defend their rights.

Because of the coronavirus pandemic, more than 42 million people in the U.S. may experience food insecurity in 2021. Food insecurity is defined as “a lack of consistent access to enough food for every person in a household to live an active, healthy life.” This may be a temporary situation or last a long time. Food insecurity — one way to measure how many people cannot afford food — is especially prevalent in the U.S. among children and older people. (tinyurl.com/j5kkvd3j)

From 1969 through the early 1970s, the Black Panthers’ Free Breakfast for School Children Program fed tens of thousands of hungry kids, enabling them to deal with their education on a full stomach. This program was the impetus to the widespread free breakfast and lunch programs that most U.S. schools offered before the pandemic.

Approximately 1.65 billion fewer school-based breakfasts and lunches were served in the U.S. between March and November 2020 than in the same 2019 time period — a decrease of 30%. There were numerous attempts, some successful, to maintain school-based hunger prevention.

Feeding America, a network of some of the largest U.S. food banks, expects to collectively distribute the equivalent of 6 billion meals in 2021, about the same amount as in 2020 and far above the 4.2 billion meals given out in 2019. This is a positive side of the response to hunger in the U.S.

But the Census Bureau has been conducting surveys about hunger — defined as not having enough to eat sometimes or often during the previous week. Between 19% and 29% of Black households with children have experienced hunger over the course of the pandemic. This compares with 7% to 14% of white U.S. families, and 16% to 25% of Latinx families. (tinyurl.com/vfhktpf4)

The food assistance portion of the Biden COVID relief bill will be far less helpful to Black and Latinx families as they are further down the economic ladder.

U.S. workers — especially women — have lost jobs at a historic and catastrophic rate during the pandemic — a loss exacerbated for some workers by the outright theft of their wages by bosses. A 2016 Economic Policy Report defines wage theft as “the failure to pay workers the full wages to which they are legally entitled . . . which can take many forms, including but not limited to minimum wage violations, overtime violations, meal break violations, pay-stub and illegal deductions or misclassification.” (tinyurl.com/apkx8e7r)

The issue of wage theft has been urgently raised by the Laundry Workers Center, a New York/New Jersey community-led grassroots group organizing in small businesses which mainly employ immigrants. On May Day, LWC protesters marched against the owner of Wash Supply, who had refused to pay his workers overtime. The laundry workers had been fired after voting to form an independent union to defend their rights. (Workers World, Feb. 2)

This is just one example of wage theft. The Center for Public Integrity has examined information on minimum wage and overtime violations from the U.S. Department of Labor. In 2019 alone, the agency cited about 8,500 employers for taking about $287 million in wages away from workers. Big companies such as Halliburton in fossil fuels or Circle-K convenience stores find it easy to stiff their lower-paid workers. These two companies, along with the security giant G4S Wackenhut, have taken more than $22 million from their employees since 2005. (tinyurl.com/ztwrf4ft)

But the Department of Labor only handles a small fraction of wage-theft cases — not included are cases under state law or where the employees sue, where the employees are afraid to complain or where a union is involved. Some economists estimate that U.S. wage thefts total $15 billion a year.

Having an extra $15 billion in their pockets every year would be a big step forward for workers to meet their need to pay for a roof over their head and food to put on the table.