The following is an appeal by the Swedish Iraq Solidarity Association on occasion of the World Press Freedom Day, May 3.

Eighteen years have passed since Iraq was invaded and occupied in 2003 by the United States, supported mainly by Britain. The coverage by Western media — not least the Swedish media — of developments in the country has been extremely deficient and often directly misleading. 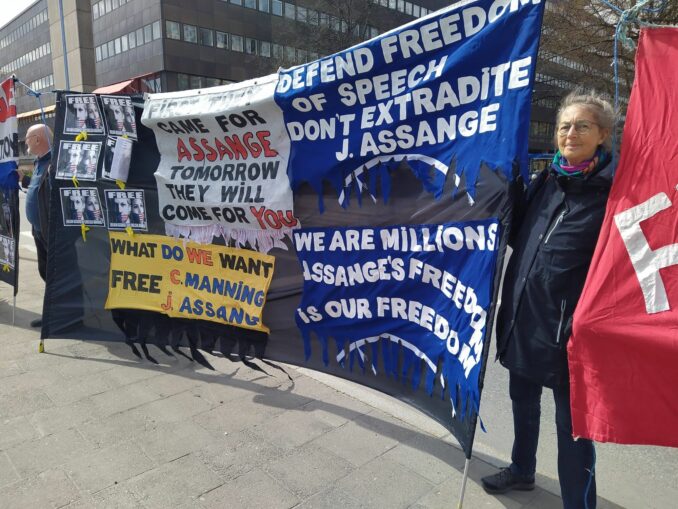 The Australian journalist Julian Assange, who through WikiLeaks revealed to the world the war crimes of the invading forces, is being held without trial in a British high-security prison under poor sanitation and in total isolation, which equals mental torture. His case is not only a mockery of the rule of law but also an attack on international press freedom, intended as a warning to the media worldwide. Whoever reveals war crimes will be severely punished; whoever commits them goes free.

Iraq, which before the invasion was a rich and successful country with a high standard of living for the population, has been destroyed by the invasion. Over one and a half million people have been killed, even more injured or displaced from their homes or subjected to arbitrary violence and abuse.

Large cities such as Mosul and Fallujah have been repeatedly subjected to terror bombing and mass destruction. The country’s infrastructure, including the water and electricity supply and sewage treatment plants, has been smashed to pieces. Extensive corruption prevents reconstruction. Politically, the United States has imposed on Iraq a sectarian system to divide its people.

The weapons used by the United States have caused lasting damage to the environment and to its people. Depleted uranium, white phosphorus and other chemical toxins were used in its warfare.

Many children are still [being] born severely malformed due to radioactivity and other environmental degradation. President Joe Biden recently made a big deal out of the fact that the United States is now joining the Paris Agreement. He made no mention of the [U.S.] American war machine’s deliberate environmental destruction and poisoning, not only in Iraq.

Officially, the U.S. role today is said to be to fight terrorism, although terrorism was a direct creation of the U.S. war, as even President Barack Obama noted. In reality the role of the United States includes massive bombings of civilians, drone strikes on Iraqi territory, such as the one that resulted in the assassination of Iranian General Qasem Soleimani on Jan. 3, 2020, and the deployment of special forces, contract staff and intelligence agents.

There is strong pressure for U.S. troops to leave Iraq. Major demonstrations call for national independence. On Oct. 1, 2019, a series of extensive demonstrations began, the so-called October Uprising. More than 700 protesters have been killed and thousands injured. No one has been held responsible for these abuses. Media reporting has been almost nonexistent.

The Pentagon plans to stay

The Iraqi parliament has called on the United States to withdraw from the country, and talks have been held with the government on the withdrawal of U.S. military units. But the commander of the U.S. Central Command, Kenneth McKenzie, says: “I do not see us completely withdrawing from Iraq in the future.”

The U.S. military is clinging to Iraq, but with a less conspicuous role, mainly as “advisers” and for military training and exercise. Combat units are transferred to Kuwait, Jordan or other areas, from where they can intervene again when they deem it appropriate.

At the same time, the U.S.-led military alliance NATO is increasing its strength in Iraq from 400 troops to 4,000. Formally, that force is currently under Danish command (formerly Canadian, next year Italian), but ultimately control lies with the United States. In addition, the United States finances private companies, which provide mercenaries.

For the United States, Iraq is a base for attacks on Syria and the encirclement of Iran; [Iraq is] a pawn in the game for control of the oil-rich and strategically important Gulf region and ultimately in the pursuit of U.S. domination over the entire Eurasian continent.

Since 2015, the Swedish military has been participating in the U.S.-led coalition Operation Inherent Resolve (OIR) in Iraq, which lacks a mandate from the United Nations. Sweden has no national interests to defend in the region and contributes to violations of international law as the coalition carries out attacks in Syria. Sweden should not contribute to the occupying power’s continued abuses against Iraq and its neighbors.

[Swedish] Foreign Minister Ann Linde and the Ministry of Foreign Affairs have still not answered satisfactorily the questions about Sweden’s treatment of Julian Assange that Nils Melzer, the U.N. Special Rapporteur on Torture, and editor Arne Ruth asked more than a year ago.

The Iraq Solidarity Association calls on the Ministry of Foreign Affairs to answer these questions and act for the immediate release of Julian Assange. The war criminals should be punished, not those who exposed the crimes.

The Association calls on the media to break the silence about the illegal abuses against Julian Assange and to stop the smearing of him, which contributes to obscuring this judicial scandal. Defend freedom of the press in the world!

The Association demands an end to Sweden’s participation in the war and to all foreign interference in Iraq! The Iraqi people must be allowed to decide in their own country. USA out of Iraq!