Mumia Abu-Jamal’s 67th birthday was commemorated with three well-attended actions in San Francisco and the East Bay from April 20-24. 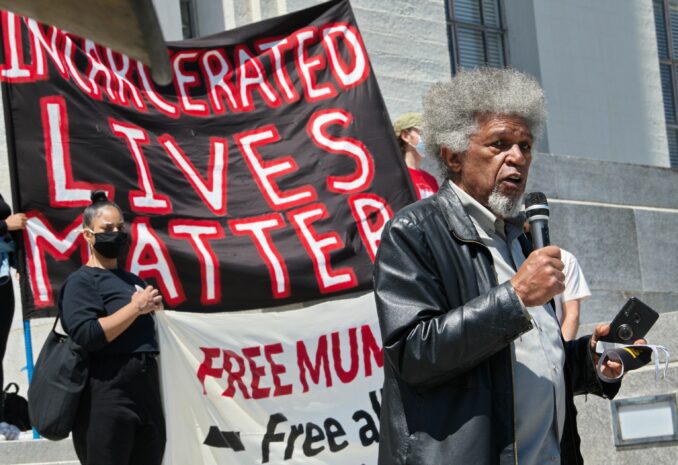 On April 20, more than 50 people picketed in front of KQED public television studios in San Francisco’s Financial District to protest the airing of Independent Lens’ “Philly DA” about the career of District Attorney Larry Krasner. Although he campaigned as a “progressive” who would rectify decades of white-supremacist rulings against Black defendants, Krasner has since refused to order a new trial for Mumia — or open possibilities for overturning his conviction.

Mumia, a world-renowned revolutionary, writer and political prisoner, has served over 40 years for a crime he did not commit. Krasner has fallen into lockstep with the Fraternal Order of Police which have stood in the way of Mumia’s release.

A broad coalition of activists and organizations is demanding Independent Lens grant them equal time to present Mumia’s case. The coalition organizing the KQED protest included the Labor Action Committee to Free Mumia, No Justice Under Capitalism, Free Mumia SF and the Prisoners’ Solidarity Committee of Workers World Party.

A day of international solidarity with Mumia on his birthday began April 24 in Fruitvale with a rally at Oscar Grant Plaza — renamed by the community after Bay Area Rapid Transit (BART) police assassinated Grant, a young Black man, in 2009. More than 100 people marched from there to rally outside the Oakland Police Department. Speakers from the Oakland Education Association, the SF Bay View National Black Newspaper and the Black Panther Party Cubs demanded Mumia be set free immediately.

The demonstrators stayed in the streets and marched to the Alameda County Courthouse. District Attorney Nancy O’Malley has consistently refused to charge and prosecute Oakland police and sheriffs for killing Black and Brown people. A broad array of people spoke, including young activists on how Mumia’s writings had politicized their generation. A taped recording in support of Mumia from Kevin Cooper, a prisoner on death row in California, was played. Pam Africa, Minister of Confrontation of the MOVE organization and head of International Concerned Friends and Family of Mumia, called in from Philadelphia, as did Mumia’s grandson, Jamal Jr., to thank everyone for their solidarity and organizing.

Later in West Oakland, a ceremony was held for Mumia on the street where Huey P. Newton, a leader of the Oakland Black Panther Party, was shot and killed August 22, 1989. Participants gathered in front of a home with a mural dedicated to the women of the Black Panther Party. Black activists — including Fredrika Newton, his widow and president of the Dr. Huey P. Newton Foundation — led a procession to 10th and Center Streets where Newton was killed.

The message of these events was simple: Unite to Free Mumia! According to supporters and prisoners’ rights activists in the Bay Area, the campaign will continue until Mumia is returned home to his family.