A New York State budget that underfunds education was denounced as racist austerity by union members and allies at an April 27 rally and march in Manhattan. 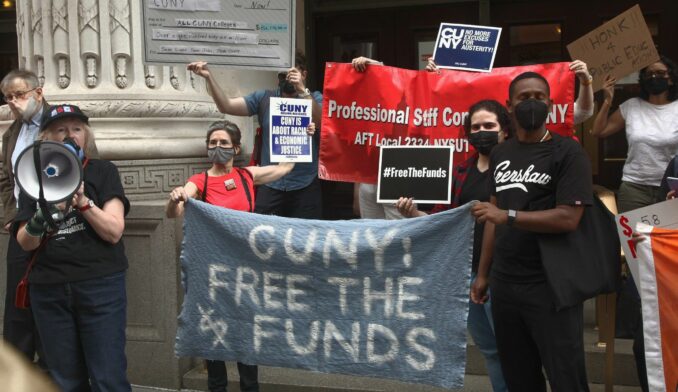 Attending were over 150 members of the Professional Staff Congress of City University of New York, members of DC37 working at CUNY and members of NYC for Change. DC37, American Federation of State, County and Municipal Employees (AFSCME), is New York City’s largest public employee union.

The PSC of CUNY is American Federation of Teachers Local 2334 and represents 25,000 teachers, both full and adjunct, along with professional staff like CUNY librarians. CUNY’s budget is mainly supported by New York State.

In the opinion of Barbara Bowen, president of the PSC — as well as the people who attended this protest — the 2021-2022 austerity budget developed by Governor Cuomo and fully endorsed by CUNY’s administration is out-and-out racism, since 70% of CUNY students are Black or Latinx.

PSC members and their allies fought in the state legislature for a budget that rejected all cuts proposed by Cuomo and increased funding for CUNY colleges through reforms to close the TAP (Tuition Assistance Program) Gap and expand opportunity programs.

They won! The CUNY budget has been stabilized. The CUNY administration has no more excuses for maintaining the austerity measures forced on teachers and staff in 2020.

CUNY colleges have been allocated $1.5 billion in federal stimulus funds, $891 million of which is available for institutional use. Another $634 million has been allocated to CUNY for direct student aid. Yet while CUNY has distributed $118 million in student aid, the three recent quarterly reports on the CUNY Budget and Finance website disclose a total of only $51 million of stimulus funds spent so far on institutional expenses.

It’s past time to #FreeTheFunds and use the stimulus money as intended to protect the quality of a CUNY education and the livelihood and safety of CUNY workers.

PSC members are demanding CUNY use the federal money now: Speed up payment of the 2% raise for teachers and staff; rehire all adjuncts laid off in 2020; unfreeze job searches; restore limits to class size; and invest in protecting the health and safety of the CUNY community on campus.