May Day began in the U.S. in 1884 after labor federations called for worker strikes and protests for the eight-hour day. Some 400,000 workers answered the call countrywide on May 1, 1886. That year eight worker organizers, some immigrants, were arrested and framed for the May 4 bombing of a Haymarket Square rally in Chicago. Five were sentenced to death; four were executed and a fifth died in his cell. An 1889 international socialist conference declared May 1 International Workers Day, in part to honor the Haymarket Martyrs. The day was revitalized in the U.S. in 2005 by the Black-led Million Worker March, and in 2006 by the Latinx immigrant workers’ mass strike. In 2021 the day was commemorated around the world; Workers World Party helped organize a number of actions across the U.S. 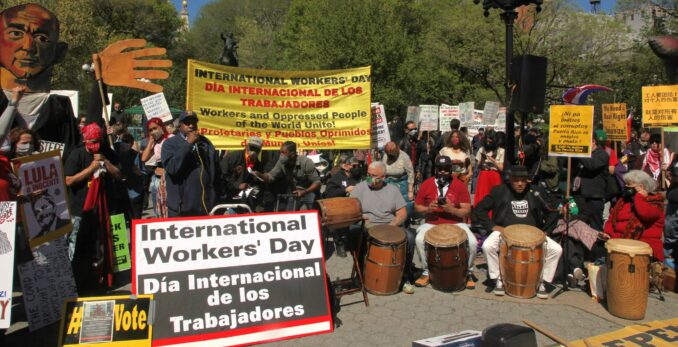 May Day in New York City returned to Union Square after a three-year absence from that historic location of worker struggle. More than 40 organizations of working and oppressed people rallied before marching to the home of centibillionaire Jeff Bezos. The march was led by current and former Amazon workers from Amazon’s JFK8 fulfillment center in Staten Island, including Chris Smalls, fired last year after organizing a walkout there over lack of COVID protection. Workers at JFK8 have begun a union drive, which Smalls’ Congress of Essential Workers is involved with. 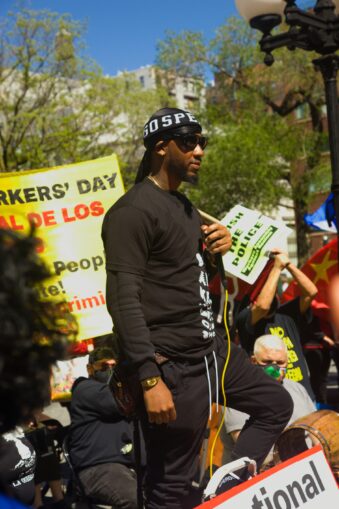 “We are workers, and we have power!” said Clarissa, representing Workers Assembly Against Racism. “And each and every one of us carries a spark that can burn this whole racist, sexist, exploitative, capitalist system down!”

Earlier in the day, 300 people gathered in New York’s Chinese community to support the laundry workers of Wash Supply, fired after voting to form an independent union. Protesters marched to the home of the owner — found to have committed wage theft by paying below minimum wage — and held a rally, then continued to the Union Square events. The Laundry Workers Center coordinated the action. 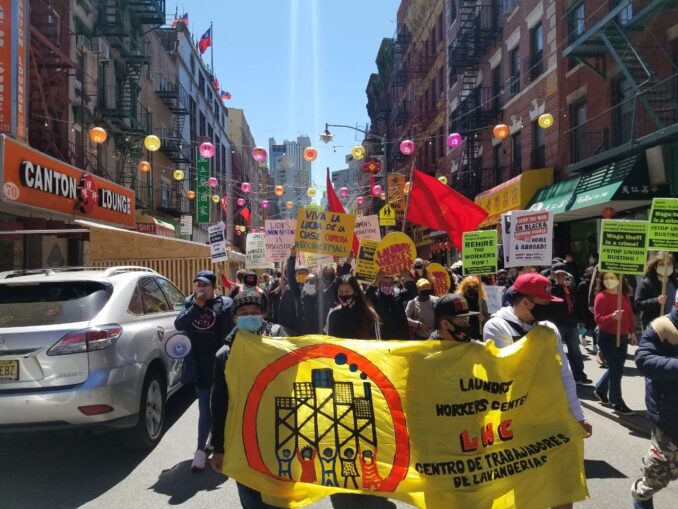 A spirited May Day march through Center City Philadelphia targeted the Comcast Center, the health care-for-profit industry at Independence Blue Cross and Wells Fargo Bank, where protesters stopped to demand public banking. Chants included calls to end Israeli apartheid in Palestine and to abolish Immigration and Customs Enforcement (ICE) and end detention of immigrant workers. Before returning to City Hall, where demonstrators called for defunding the police and funding community services, they stopped at Philadelphia District Attorney Larry Krasner’s office to demand release of political prisoner Mumia Abu-Jamal. The march was followed by a community speak-out with entertainers and tabling. A broad coalition of community and activist groups organized the event. 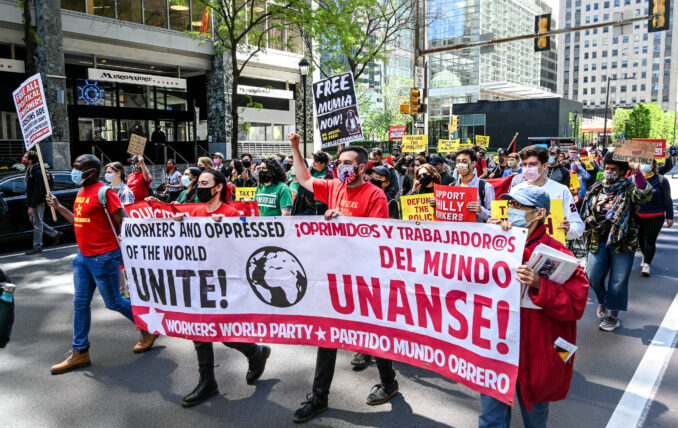 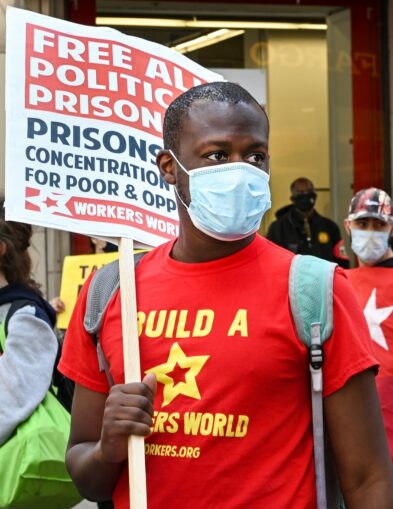 Initiated by the Northeast Ohio Workers Center, Cleveland’s “May Day Workers Assembly and March” was jointly organized by a coalition of local political, worker-based and community organizations. The gathering heard from a range of speakers — education workers and grocery workers on the need for unions, a supporter of library janitors on union busting, an undocumented student on deportation and detention, a medical student on the health-care crisis, a sex worker on the need for decriminalization, an environmentalist on the Green New Deal, a local activist on the history of May Day and a housing rights organizer on the crisis of evictions. 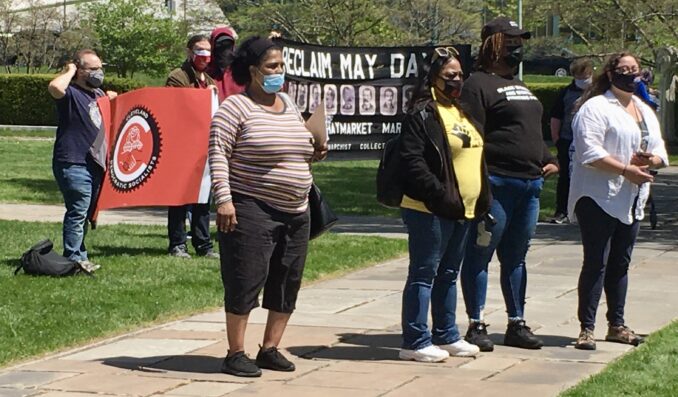 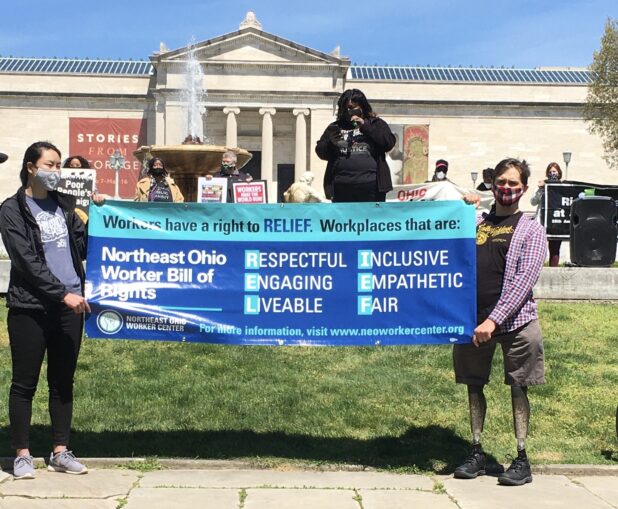 After the rally, marchers chanted: “Hey, hey, ho, ho, this union busting has got to go.” Other “has to go” subjects were the bosses, capitalism, Walmart, Amazon, Cleveland police, detention centers and white supremacy.

On a particularly hot day — almost 90 degrees — socialists and freedom fighters found a shady spot in a downtown Pensacola, Fla., park to celebrate May Day. The Central Gulf Coast branch of Workers World Party — encompassing parts of Alabama, Florida and Mississippi — called the action and was joined in organizing by the Pensacola Community Action Committee and Black Voters Matter. Multiple speakers spoke on topics including  the need for worker-led unionization, the attacks on the Black Liberation Struggle through the passing of HB1, the #BAmazon union struggle and the ongoing local women’s clinic defense. A powerful history of May Day and the need for revolutionary optimism, written by a WWP candidate, was read, which ended by proclaiming: “May Day is all of us, together!”

After the rally, a long car caravan drove through Brownsville, a working-class, low-income neighborhood in downtown Pensacola, with signs such as “Stop Evictions Now!” “From Afghanistan to Minneapolis, End U.S. Occupation Everywhere!” and “Smash Police Violence and White Supremacy!” 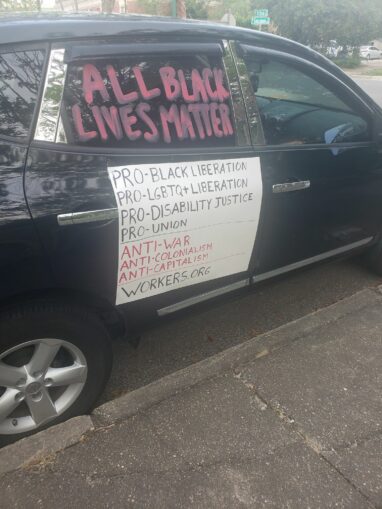 In Portland, Ore., a crowd of 200 mostly Black and Brown May Day demonstrators faced intimidation by police and Department of Homeland Security officers at the Immigration and Customs Enforcement detention center, where they convened following a May Day march and car caravan. With sirens blasting and lights flashing, 22 Portland police and DHS vehicles sped toward demonstrators. Riot gear-clad police, brandishing rifles and tear-gas launchers, advanced at the crowd yelling: “Get back, move off!”

A May Day rally began at the Eastbank Esplanade, where people delivered impassioned speeches. “International Workers’ Day is our people’s holiday,” said Adrian, an organizer with International Migrants Alliance. “We cannot talk about [migrant] workers without talking about the conditions that have led to forced migration,” said a Somali student representing the Hurriyyah Collective, an anti-imperialist Muslim group. 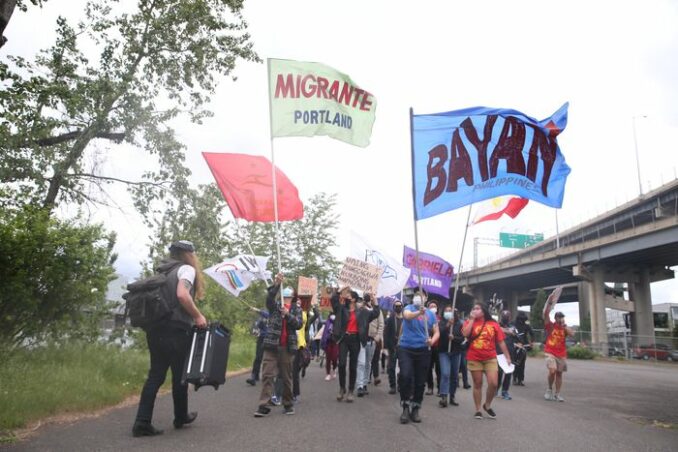 Workers World Party gave a salute to the Amazon workers in Bessemer: “They lost the vote for a union; but by heroically facing up to the Amazon Goliath, they won the war. They sent ripples throughout the working class here and around the world.” The event was organized by a coalition of immigrant and worker’s rights groups such as Migrante, Anakbayan and the International League of Peoples’ Struggle, who voiced their outrage over the exploitation and mistreatment of migrant workers in the U.S. and internationally.

Two May Day demonstrations — a union-led march in the morning in San Francisco and a rank-and-file worker and community based car caravan in the afternoon in Oakland — raised important issues and upheld workers often overlooked at traditional labor gatherings. 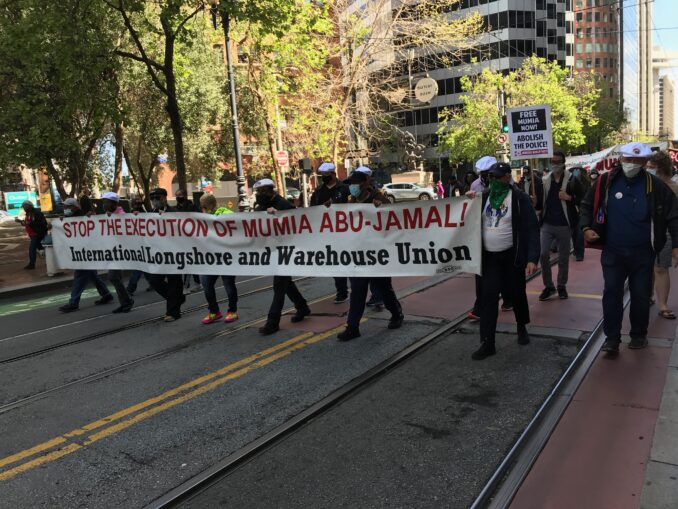 In San Francisco, International Longshore and Warehouse Union (ILWU) Local 10 led the march with their historic banner reading: “Stop the execution of Mumia Abu-Jamal.” Organized labor in the Bay Area has celebrated May Day every year since 2006, when immigrant workers reclaimed the day for the working class. This year, most of the Bay Area’s five county labor councils joined together to call a march dedicated to the 1934 San Francisco General Strike. Known also as the “West Coast Longshoremen’s Strike,” this pivotal event in labor history began May 9, 1934, and lasted 83 days, leading to unionization of all West Coast ports. 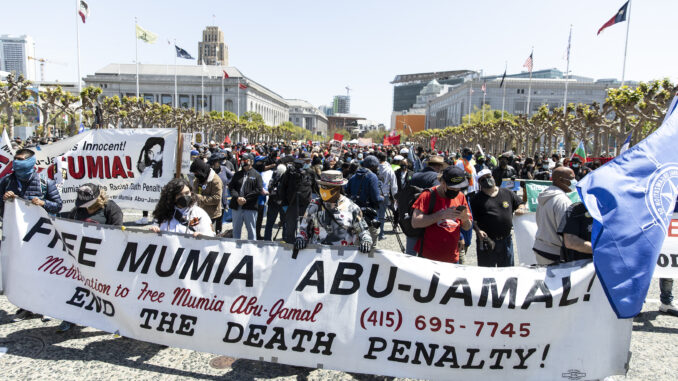 This year’s ILWU-led labor march was also dedicated to Mumia Abu-Jamal, a U.S. political prisoner locked up for the past 40 years for his writings and activism against the racist Philadelphia police. In 1999, the ILWU shut down all West Coast ports to support the campaign to get Mumia off death row.

The San Francisco march also focused on support for the Protecting the Right to Organize (PRO) Act, strengthening unorganized workers in the fight for unions. Other themes were Black Lives Matter, support for undocumented immigrant workers and an end to anti-Asian violence. Several hundred unionists and community members marched from the Embarcadero, in downtown San Francisco by the Bay, to Civic Center Plaza. Speakers included ILWU Local 10 President Trent Willis and Dr. Angela Davis, well-known scholar and abolitionist activist, invited by Local 10 to help lead the march.

Later that afternoon, an extraordinary coalition of activists, community organizations and revolutionary groups caravanned throughout Oakland, beginning in the Chinese community where speakers gave solidarity messages to the community in Mandarin and Cantonese. At the first stop — a Whole Foods Market where demonstrations were held recently to support the Bessemer, Ala., Amazon union drive — over 80 cars stopped traffic for 15 minutes, while a recorded message from a former Amazon worker was played. Hashid Kasama of Rideshare Drivers United talked about efforts to organize Uber and Lyft drivers.

A second stop at the Lake Merritt Amphitheater brought solidarity greetings to the families of Mario Gonzalez and Steven Taylor, both recent victims of police murder in the Bay Area. Family members and anti-police terror activists have been organizing around both cases to win justice for the families and the community.

All along the way there were talks and chants about supporting the most oppressed members of the working class: incarcerated workers, sex workers, trans youth and the undocumented. 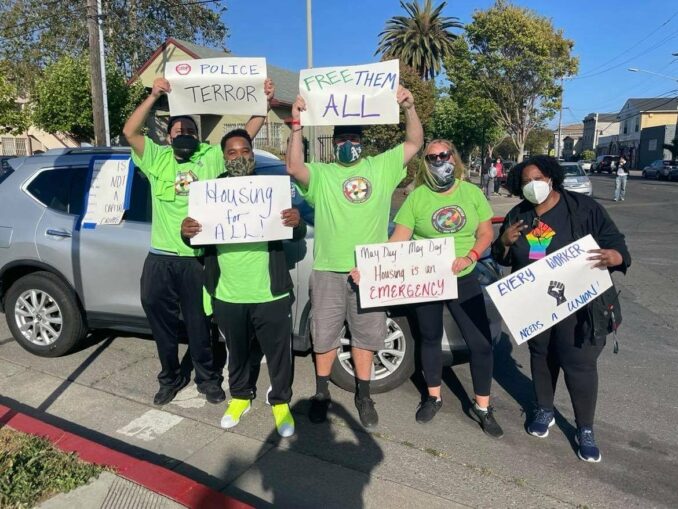 The last caravan stop was in West Oakland at a housing reclamation by House the Bay, where housing rights and unhoused activists have taken over an abandoned house. The caravanners were treated to a community barbeque dinner and joined a rally where speakers were Indigenous activists, formerly incarcerated people, the mother of a young Black man who died at Santa Rita Jail in Alameda County and sex workers.

From the spirited commemoration of the historic 1934 San Francisco General Strike to the community housing takeover in West Oakland, May Day has again proven to be vibrant and alive in the Bay Area.