The following talk was given at the May Day Union Square rally in New York City on May 1, 2021. 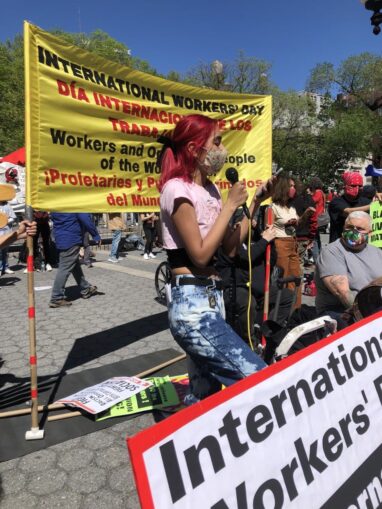 Hi! My name is Clarissa and I’m with the Workers Assembly Against Racism, WAAR.

I want to thank our comrades in Bessemer, Alabama, who worked tirelessly to begin a union drive at their Amazon warehouse, a victory in itself. Although the vote was a “no,” this does not mean we have lost against [Jeff] Bezos and his empire – willing to spend $10,000 a DAY to union bust.

It simply means what we already knew: that our capitalist oppressors will stop at nothing to try and snuff out the revolution. The capitalists and gatekeepers of our happiness and security are terrified. What these pigs don’t realize, however, is that their fear is like oxygen to our collective fire — it makes our power grow and we become stronger!

I would next like to thank the Congress of Essential Workers who have picked up the torch, reignited it and just last week began a union drive at our very own Staten Island Amazon Warehouse, JFK 8!

Right now only 22 percent of workers in New York City are unionized and organizing the Staten Island warehouse would pave the way for every warehouse in the city to unionize.

Today is International Workers Day, born of the struggle for the eight-hour workday back in the late 1800s, and revitalized here in NYC in 2006 by migrant workers. You might be wondering, what exactly is a worker? Or “am I a worker?”

If you’re asking these questions and you’re not a cop or landlord or a politician like Chuck Schumer, the answer is probably yes! Health home aides working exploitative 24-hour shifts are workers, cab drivers paying off $800,000 loans for their medallions are workers, adjunct faculty providing labor that keeps universities profitable are workers, Uber and Lyft drivers are workers, sex workers are workers, homeless and unemployed people are workers, incarcerated people subjugated under the prison-industrial complex are workers!

We are workers and we have power! None of us are expendable, unlike what capitalism and white supremacy want us to think. We all deserve to have a good, safe, healthy life. And each and every one of us carries a spark that can burn this whole racist, sexist, exploitative, capitalist system down!