Three other cops, who stood by as Chauvin knelt on Floyd’s neck and body until he died, should be found guilty on the most stringent charges possible in their upcoming trials.

One thing is perfectly clear: This trial and the legal verdict alone cannot halt police terror. From the trial’s opening March 29 to the verdict’s announcement April 21, cops slaughtered at least 64 people in the U.S. — an average of two people a day. (New York Times, April 22)

More than half of those killed were people of color, mostly Black and Latinx — numbers shockingly greater than their percentage of the population.

Almost all 64 were under 30 years of age. They included four teenagers — like 13-year-old Adam Toledo, who Chicago police shot and killed while his hands were raised. Some had mental health crises. Sixteen-year-old Ma’Khia Bryant in Columbus, Ohio, was attempting to defend herself in a melee. 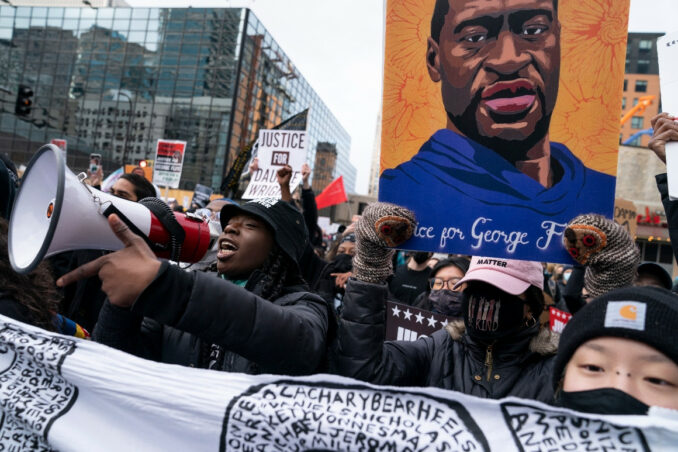 Meanwhile, people of color, young people and people with disabilities have suffered death-by-cop after a roadside flat tire emergency, for driving with temporary license plates or holding an expired driver’s license during the pandemic. Cops have killed a child playing in a park, people sleeping in their own beds, a veteran having a PTSD breakdown and people defending themselves against domestic violence.

Bowling Green State University Professor Philip Stinson, who studies civilian killings by law enforcement, said numbers on deadly police force have changed little in the decades since researchers began to track them. Only about 1.1% of officers who kill civilians are charged with murder or manslaughter, let alone convicted. (NY Times, April 22)

Not good cop versus bad cop

Stopping police brutality must go beyond weeding out individual bad apples. To bring justice for those who have lost their lives, who were maimed and traumatized in so many other ways by police violence, more is needed than the conviction of one killer cop — even though Chauvin’s conviction is unprecedented in the U.S.

Policing in the U.S. is all about maintaining social order, oppressing the masses of the people who are being throttled by this rotten system and who are always seeking a way to rise up. Policing includes the occupation of Black and Brown communities, all forms of racial profiling, physical and mental assaults and killings of Black and Brown bodies, especially young people.

The Chauvin verdict alone will not stop this war against the people. Op-ed columns that stress legal action cannot on their own halt police terror. Only a rising struggle against police terror — and an intensification of the campaign to abolish the police — will stop death-by-cop.

A campaign to abolish the police will strengthen and move to a higher political level, as ever more activists and revolutionaries make the demand for abolition through revolutionary struggle, not simply reform.

Police in a capitalist state exist only for the purpose of guarding the property and profit of megabillionaire owners and institutions, at the expense of the poor and workers of all nationalities. Lasting abolition of repressive policing will come only with the abolition of the capitalist state.

The verdicts against Chauvin were one victory in eradicating police terror and white supremacy — two evils that go hand-in-hand. But the decisive factor in the unanimous verdicts began much earlier — in the streets of the U.S. and throughout the world. Unprecedented massive protests against racism, including the torching of a Minneapolis police station, began the day Floyd was murdered and continued for months.

We are in solidarity with all those who will be in the streets again — throughout the coming days and weeks — to express relief at the guilty verdict, to acknowledge its limitations and to shout their demands for justice and liberation from state oppression.

We demand that not one person be arrested or assaulted by the police or National Guard for being in the streets to fight police terror — however they see fit to do this. Hands off the protesters!