An international coalition of groups supporting Mumia Abu-Jamal held events April 23-25 to commemorate his 67th birthday (April 24) and call for his freedom. Mumia has been unjustly incarcerated for nearly 40 years. His health has deteriorated due to the harsh conditions he has endured under an unjust carceral system. He is currently hospitalized following triple bypass surgery on April 20. (tinyurl.com/ygbcnra9)

On April 24, over 1,000 people gathered in Philadelphia for a rally and march. “Taking It to the Streets for Mumia” began at City Hall across from where the statue of racist Frank Rizzo was removed in 2020 due to public outcry against his brutal legacy.

Dr. Johanna Fernandez spoke against the corrupt legal system and explained how the Philadelphia police worked “hand in glove” with the prosecution and racist judge in Mumia’s 1982 trial. Evidence has surfaced indicating the prosecution bribed a key witness.

Pam Africa gave news of Mumia’s health, after having spoken briefly with Mumia earlier in the day. He is still hospitalized, but said he is beginning his recovery by taking some short walks. He confirmed he is shackled while in his bed. Mumia’s medical advisor Dr. Ricardo Alvarez traveled from California to speak at the event.

Mumia’s brother, Keith Cook, traveling from North Carolina, told the gathering that they must continue to fight until his brother is free. YahNé Ndgo, Immortal Technique and Ellect performed, and the crowd sang along to Stevie Wonder’s “Happy Birthday.” Speakers included Chairman Fred Hampton Jr. and Immortal Technique.

Susan Abulhawa connected the struggle for Black liberation with the free Palestine movement. Her thoughts about Mumia’s character and spirit inspired: “Mumia teaches us what it is to be free in our minds. He was a Black man who was too free, and that is why they locked up his body.”

A powerful moment came when Janine Africa, Janet Africa, Sekou Odinga, Jihad Abdul-Mumit and Kazi Toure, five liberated political prisoners, stood together on the stage. The group has spent a combined over 150 years behind bars. 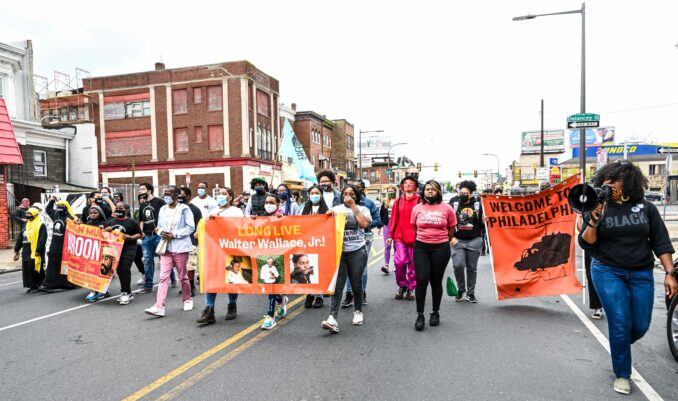 The rally moved into the streets for a spirited march from City Hall to the Art Museum, carrying banners and signs and shutting down traffic along the Benjamin Franklin Parkway.

The march stopped at the site of last year’s houseless encampment, calling attention to the city’s inability to provide basic services to the most vulnerable. Fired by Amazon for speaking up for workers rights, Chris Smalls, with the Congress of Essential Workers, called for support of Amazon workers organizing. The rally continued on the Art Museum steps.

Larry Holmes spoke about how Frank Rizzo, “the most racist police chief,” waged war on the Black Panthers, MOVE and the entire Black community in Philadelphia. Janine Africa warned that we must not let the police kill Mumia like they killed the incarcerated MOVE family members Phil Africa and Merle Africa. Delbert Africa was freed, but succumbed only six months after his release to illness caused by inadequate health care during his incarceration.

Travelling from Boston mYia X raised the memory of Winnie Mandela and Shaka Sankofa and borrowed from the words of Ella Baker, saying “We who believe in freedom, cannot rest until we bring Mumia home.”

Jamal Hart, Mumia’s grandson, called on the younger members in the crowd to take up the fight to free Mumia. Calling for his grandfather to spend his next birthday surrounded by his family and friends, he chanted: “No more birthdays in prison.”

The coalition sponsored events in West Philadelphia April 25 honoring Walter Wallace Jr., murdered by Philadelphia police six months ago in 2020, and Russell Maroon Shoatz, imprisoned since 1972 and suffering from stage 4 cancer. Members of Shoatz’s and Wallace’s families participated in the event that kicked off a community cleanup at the Maroon Garden, followed by a march to Malcolm X Park for a speakout.

Food Not Bombs Solidarity provided snacks and water for the events on both days.