Supporters of Mumia Abu-Jamal gathered in Houston on his birthday, April 24, to demand his immediate release and the release of all political prisoners.

“Mumia is a freedom fighter. He is a Panther. He is a captive of the state, because they want to kill him. It is up to all of us to fight for his freedom to get him out of that prison,” John “Bunchy” Crear told a crowd gathered at historic Emancipation Park. 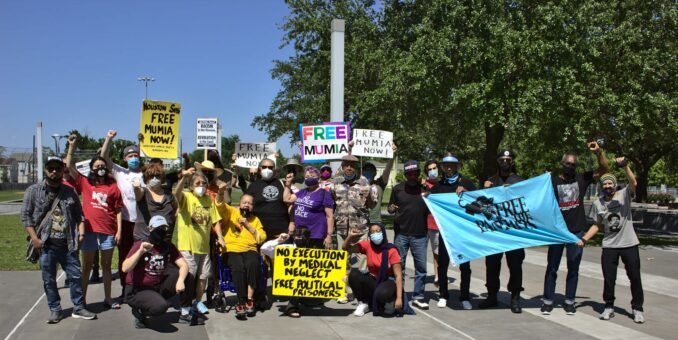 Crear joined the Black Panther Party as a youth, similar to Mumia, and condemned the decades of incarceration for so many Panthers, now elderly with medical issues.

Crear was joined at the mic by three other Panthers: James Aaron, Yusef Omowale and Claude Frost. Aaron took over as chair of the Houston Panthers after white police officers assassinated Carl Hampton July 26, 1970.

Another Houston Panther, Sandra Netter, sent her greetings and solidarity with Mumia from her bed in a local hospital.

Fanci Dee took the mic to say, “I’m here today because last summer after George Floyd’s murder, I was kidnapped by the police, along with hundreds of other protesters. Ever since then, I have been thinking about why this fight is so important to me. George Floyd should be alive. Dante Wright should be alive. We need to abolish the police, to abolish prisons, to abolish the death penalty. We are stronger together, and we can create a world without police and prisons where people can thrive and live and be happy.”

Minister Abdul Haleem Muhammad with the Nation of Islam said, “When I think of Mumia, I think of Shaka Sankofa. I think of Clarence Brandley. We don’t know if we could survive being innocent and being on death row. Mumia was a Panther, and you had to be bold to be a Panther. I think about the Panthers. They were not about guns. They were about feeding the children, educating the children, giving health care to the elders in the community. Our unity is more powerful than an atomic bomb, so we must unite to free Mumia now!”

Delia Perez Meyer sang “Las Mañanitas,” a traditional song which Mexicans sing to honor a loved one on their birthday. Then everyone enjoyed a slice of cake that read “Free Mumia Now!”

The event was sponsored by the Texas Death Penalty Abolition Movement, the Black Panther Party Alumni Association, Workers World Party and Party for Socialism and Liberation.