“In places where inequality is the deepest, the use of prison and punishment is the greatest.” (Ruth Wilson Gilmore) Prisons do not keep people safe from violence; in fact, these institutions perpetuate violence themselves and further entrench poverty. They are tools used by those who hoard mass amounts of wealth to undercut wages and pit workers against one another. 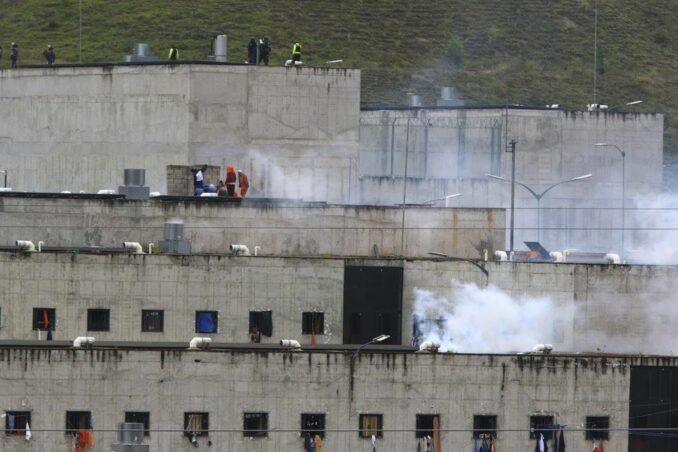 Tear gas rises from parts of Turi jail where a rebellion broke out in Cuenca, Ecuador, Feb. 23.

Once people are labeled “criminal,” “thug” or perhaps even a “gang member,” empathy often goes out the window, despite the fact that those labels were designed to sow difference and isolate members of the working class from one another and from their common enemy.

On Feb. 23, in four prisons in three of Ecuador’s cities, 80 prisoners died as “violence erupted in prisons in Guayas, Azuay and Cotopaxi provinces, which hold about 70% of Ecuador’s total prison population.” (Reuters, Feb. 24) Officials blamed the violence on rival gangs and criminal enterprises vying for business. The real culprit, however, seems to be the material conditions that caused gang formations to arise in the first place, as well as overcrowding and unsanitary conditions inside prisons during a deadly pandemic.

“Ecuador’s prison system, whose facilities were designed for some 27,000 people, still houses about 38,000 people.” (Al-Jazeera, Feb. 24) Ecuador’s incarceration rate is much lower than that of the U.S. — which remains the world’s No. 1 jailer and has exported its prison system to at least 33 other countries (Alliance for Global Justice, afgj.org/prison-imperialism).

While the U.S. hasn’t directly shaped Ecuador’s prisons, the economic policies that Washington and Wall Street dominate have had their impact. “Millions have been driven into poverty by International Monetary Fund-imposed austerity measures, before and during the COVID crisis under the Moreno-Lasso program. Youth are without work, education and a future. Some 38% of Ecuadorians live in poverty.

“Rural populations suffer most, according to the National Institute of Statistics and Census (INEC), with poverty increasing from 68% to 71% in 2019. Under Moreno, another 1.87 million people entered poverty, with a total of 1.17 million people living in extreme poverty, out of a population of just under 18 million. Moreno imposed a total wage freeze on all workers as the income of the elites soared.” (Workers World, April 10)

“The presidential candidate for the opposition alliance Union for Hope (UNES), Andres Arauz, demanded that the president of Ecuador, Lenín Moreno, take responsibility for the consequences of prison riots occurring in the country. . . . He pointed out that Feb. 23 will go down in history as a very sad day for Ecuador that demonstrates negligence, incapacity and abandonment in all areas of public policy.” (Cuba Sí, Feb. 25)

Horrible, inhumane conditions inside prisons in Ecuador provoked violence that claimed the lives of 80 people. This trauma will forever affect the families and loved ones of the dead. The conditions that precipitated such violence are similar to what people inside prisons, jails and detention centers in the U.S. face, particularly during the COVID pandemic.

Prisons are part of a state power, whose role is to protect the wealth that the capitalists class has amassed by exploiting the workers whose labor produced that wealth. Abolishing the conditions that made prisons necessary means abolishing the oppressive system that creates enormous inequalities — from the U.S. to Ecuador.