For decades, capitalist industries have produced wastewater by-products without serious plans for how to dispose of them. Their contents are usually toxic, often radioactive and generally hazardous to surrounding communities where they are stored and to the larger environment should they be released — accidentally or otherwise. 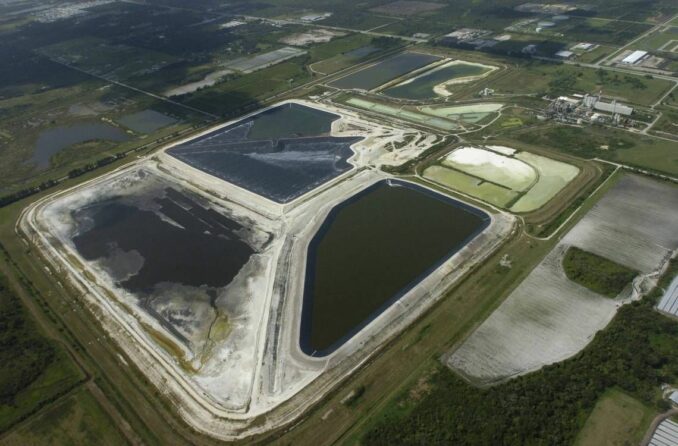 While there are many thousands of such hazardous sites across the U.S., it is rare that they make the news. Case in point is the reservoir on the former 676-acre Piney Point phosphate mine site near Tampa, Fla. A state of emergency was declared April 3 when the walls of the storage pool, holding water polluted with phosphate and containing radioactive materials radium and uranium, threatened to burst.

A break in one of the walls encasing the 77-acre pond was discovered April 2. Fearing that a collapse of the retention pool could rapidly release around 600 million gallons of hazardous wastewater and flood the surrounding area, Gov. Ron DeSantis ordered an evacuation of 300 nearby homes — but did not open shelters.

To relieve the pressure on the enclosure, around 215 million gallons of wastewater were pumped into Port Manatee in Tampa Bay. Residents began to return to their homes later in the week.

While a major disaster was averted, it is just a matter of time before this retention pool experiences another breach. And environmentalists have repeatedly expressed concern about the potential impact if toxic discharge raises the level of phosphorus in the bay where the wastewater was pumped.

Within a year of its founding as a plant to turn phosphate into fertilizer in 1966, owner Borden Chemical was caught illegally dumping waste into nearby bays and tainting popular fishing grounds. By 1970, pollution flowing from the plant into a creek that emptied into Bishop Harbor was linked to massive toxic algae blooms in the state’s Terra Ceia Aquatic Preserve. (Washington Post, April 6) Bishop Harbor is a marine estuary that flows into Tampa Bay.

In 1989, a 23,000-gallon leak of sulfuric acid forced hundreds of people to evacuate. In the early 1990s, local communities spent billions of dollars to clean up the contaminated bay. Yet state environmental officials frequently bent the rules to let the plant operate, despite financial instability.

The site went through a succession of owners. In 2001, then-owner Mulberry Corp. declared bankruptcy and shut off pumps that were recycling wastewater. The Florida Department of Environmental Protection received special permission from the U.S. Environmental Protection Agency to step in. They loaded millions of gallons of toxic waste onto barges, took them to the Gulf of Mexico and dumped the waste into the ocean.

While the company went bankrupt and the plant shut down, waste from over three decades of phosphate mining remained on the site — an environmental ticking time bomb. Spills from the site in 2003 produced another large algae bloom in  Tampa Bay.

The current owner HRK Holdings bought the plant in 2006. The company, which has since filed for bankruptcy, sought aid from Florida’s Manatee County commissioners to secure permits to inject the wastewater into deep wells.  Opposition from local environmentalists and farmers, concerned that phosphate injection into the aquifer would damage crops and drinking water, pressured officials to drop the plan.

Since the latest near-catastrophe, state and local officials are once again promoting the idea that injection is the “solution.” Their plan is to inject the plant’s toxic water 3,500 feet underground into the Floridan Aquifer, using a potential influx of $200 million from President Joe Biden’s infrastructure plan to foot the bill.

This would only exacerbate the problem by introducing toxic chemicals into the aquifer, and the Floridan Aquifer system is the primary source of drinking water for most cities in central and northern Florida and eastern and southern Georgia. Injection also increases risks of earthquake activity, like that experienced in several states where injection has been used to dispose of wastewater from hydraulic fracking for natural gas. The U.S. Army Corps of Engineers has linked injections into deep wells with increased earthquake activity since 1957.

The process of turning phosphate into fertilizer creates phosphoric acid — the main fertilizing component. The leftover chemical by-product phosphogypsum is radioactive. Over five tons of this waste are produced for every one ton of phosphoric acid. It is dumped into gypsum stacks, hundreds of feet tall and hundreds of acres wide. They are covered with large lagoons, containing hundreds of millions of gallons of wastewater. (tinyurl.com/s4wcasu6)

Piney Point is just the tip of the iceberg.

This article is the first in a series on the environmental impact of industrial waste disposal.