Ohmefentanyl, acetylfentanyl, butyrfentanyl, furanylfentanyl and carfentanil are some of the fentanyl analogues that are pervasive in the drug supply in the U.S. and Canada. These drugs are similar in structure to other, usually criminalized drugs. 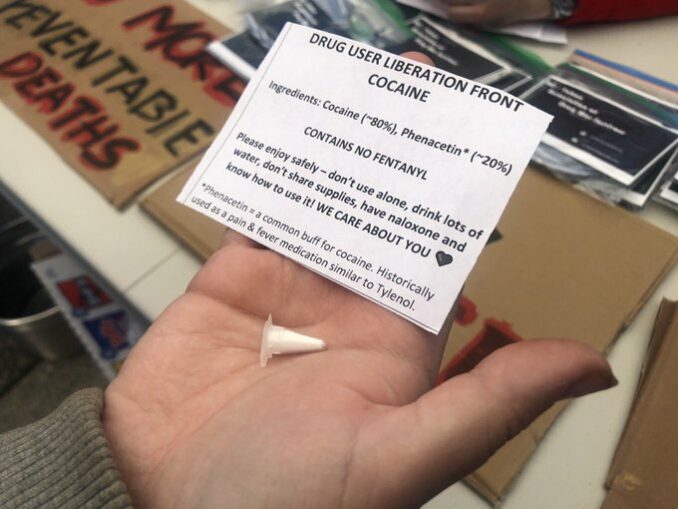 It used to be that only heroin and benzodiazepines, such as Xanax, Valium, and Klonopin, were tainted with fentanyl analogues. Now they can be found in drugs like methamphetamines and cocaine, as evident in a recent spike of overdoses in Philadelphia’s restaurant industry.

In response to this, movements are starting to rise up to deal with the problem themselves. Groups like NEXT Distro – which crosses national boundaries – provide harm-reduction supplies like fentanyl test strips, Narcan and clean needles.

In Canada, the movement has gone one step further and provided tested-pure drugs to those who want them. This was necessary because thousands of people had died due to adulterated drugs.

The movement to provide unadulterated drugs is a necessity, as addiction has become one of the biggest epidemics in the U.S. and Canada. DULF members, at great personal risk, have given away the drugs, which are illegal in Canada. But the Downtown Eastside neighborhood in Vancouver, British Columbia, is the epicenter of the province’s drug epidemic.

The movement’s demands are important for activists – especially revolutionaries – to memorize, understand and spread. Here are DULF’s demands listed in a press release issued June 23, 2020. (tinyurl.com/2c2suk2c)

Some states in the U.S. have decriminalized possession of small amounts of drugs.  Oregon was the first. The money used to punish people for possession can now be invested in treatment, which many addicts seek but cannot afford.

DULF supports community-based buyers’ clubs for heroin, cocaine and methamphetamines. The group’s main argument is that continuing to criminalize drugs only causes more deaths and devastation. This has been demonstrated.

The U.S., which is lagging behind and failing to act on the drug epidemic in a positive way, needs this movement to spread to all regions most impacted by drug addiction, such as Philadelphia’s Kensington neighborhood. There, the DULF, buyers’ clubs and locations to acquire medical-grade diacetylmorphine (heroin), are needed.

In addition to offering legalized or decriminalized drugs, there must be an expansion of access to methadone and buprenorphine (Zubsolv, Suboxone, Subutex, Sublocade). Methadone can only be acquired from methadone clinics, which are hard to get into, and are overwhelmed with people needing help.

There are also groups, like NO METHADONE Holmesburg-Mayfair, which actively oppose methadone clinics being located in those Philadelphia neighborhoods.

In other countries – such as Canada, Britain, Ireland, Australia, and Portugal – methadone can be dispensed by a local pharmacy after a person’s initial use of methadone or dose increase.

Buprenorphine, which is easier to get on than methadone, has its own set of problems.  This stems from the government’s deep misunderstanding of drug addiction. In order to get on buprenorphine, one needs to have a physician with an X-waiver. That allows doctors who are already permitted to prescribe narcotics to prescribe buprenorphine. Activists have long fought the X-waiver requirement, and are calling on the Biden administration to remove it, and to provide guidance on harm reduction-oriented methods of drug treatment.

The call has gone out to the movement to adopt the measures the DULF has advanced, and to recognize that decriminalization, legalization and methadone/buprenorphine diversion are valid and necessary steps to gain control of the drug epidemic.