According to the Miami Herald, not a single vaccination against COVID-19 had taken place in Haiti as of April 9. Lack of planning, no health system, bureaucratic inertia were all given as reasons. (tinyurl.com/fkz9s75a)

Eighty percent of Haitians live on less than $2 a day. (tinyurl.com/yfkf5jp9) The minimum wage is $6.41 for an eight-hour day. The official unemployment rate is over 13%, but most jobs are catch-as-catch-can — loading trucks, digging ditches, pushing carts, selling sugar water in the market and so on.

Food insecurity is high. Relief Web estimates that 4 to 5 million Haitians experience acute hunger, going without food for a considerable period of time. If you don’t work in Haiti, usually you don’t eat. In major cities there are foreign-funded nongovernmental organizations (NGOs) that might provide some spot relief.

Kidnapping has been both a political and financial tool in Haiti. A special U.S. SEAL force kidnapped Haitian President Bertrand Aristide to exile in the Central African Republic in February 2004. The Haitian bourgeoisie has hired gangs to kidnap political rivals. 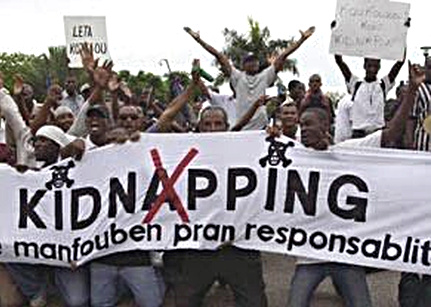 A protest against kidnapping in Port-au-Prince, Haiti’s capital.

As times have grown harder and rivalries sharper, gangs have adopted kidnapping as a fundraising affair that lets them pay for their neighbors’ support, buy weapons and support a more-than-subsistence lifestyle. Their targets have broadened.

Associated Press reported that, in December 2020, a woman in Port-au-Prince — who made her living selling hot dogs in the market and recruiting students for a cosmetology school — was kidnapped from a car that a friend was driving. Her friend’s family raised enough money to get her back, but she is still afraid to go to work. (tinyurl.com/ep7kaamr)

On April 1, Holy Thursday, the Gospel Kreyol Ministry was livestreaming its service from Haiti when a group of armed people burst into the studio and kidnapped the well-known pastor and the organist, leading them away under full view of the cameras. The church put up a GoFundMe page and freed the abducted members. The kidnappers haven’t been caught.

Bus drivers, who generally rent or own their own bus and run their businesses on a cash basis, have been a particular target. Kidnappers take the bus — their transportation out of the situation — along with the driver’s cash, and can rob the passengers. The drivers and their communities have begun fighting back with strikes and road barricades, often made of burning tires. (Miami Herald, April 14)

Drivers have reported at least one instance of cops working to clear an “accident” on National Route 1 that had caused traffic to back up so kidnappers could seize the bus drivers and their vehicles.

On April 12, five Catholic priests, one of whom was French, two nuns and three laypeople were seized on their way to an investiture service. The Archdiocese of Port-Au-Prince immediately issued a statement requesting their release. The kidnappers were asking for $3 million.

On April 15, the Catholic hierarchy asked all Haitians to participate in a work stoppage and also to pray for the kidnapped priests and the others. The 11 Haitian bishops came to the Church of St. Peter in Petionville, Port-Au-Prince, and officiated at a mass before a packed congregation, with a large crowd gathered outside.

As the bishops’ procession was leaving the church, the mostly young crowd — with fists in the air — began chanting “Nou bouke!” (“We’re fed up!”) over and over, along with “Aba Jovenel!” (“Down with Jovenel!” — Jovenel Moïse, the current president of Haiti who has refused to obey the constitution and leave office.)

Cops then fired tear gas into the church; some panicked people collapsed into the pews; others rushed out. There were no immediate reports of asphyxiation, but it can happen when tear gas is used in a confined area.

The response of the U.S. government has been muted. The State Department has issued its most severe level of warning on the danger of traveling to Haiti and has urged the government there to improve the security situation. But the current U.S. ambassador to Haiti, Michele J. Sison, is not functioning as such, having been nominated to be assistant secretary of state for international organization affairs..

This is a milquetoast response from a U.S. government whose secretary of state, Hillary Clinton, directly intervened in Haiti in 2011 to make Michel Martelly president. Martelly’s party, the Haitian Party of Tèt Kale (PHTK) in 2016 picked Jovenel Moïse, a businessman, to be president, with the blessing of U.S. diplomats.

The U.S. openly attacks Haiti’s autonomy when that suits U.S. economic and political interests — starting with the U.S. 1804 economic blockade of the country after Haitian liberation fighters under Jean Jacques Dessaline crushed the French slave masters to win independence.

Currently the U.S. appears to be using NGOs like Human Rights Watch to indirectly intervene.

It is clear that the U.S. is actually supporting the slide of Haiti into an economic and political abyss, as a warning to poor countries oppressed by imperialism against asserting their own road to development.