The excerpts below are from the Cuban daily newspaper, Granma, April 17.

“Let no one doubt that as long as I live, I will be ready, with a foot in the stirrup, to defend the homeland, the Revolution and socialism,” stated Army General Raúl Castro Ruz, first secretary of the Communist Party of Cuba Central Committee, who, like another Mambi or guerrilla, always ready with his horse saddled and a rifle under his pillow, reported that his task leading the political organization had reached its conclusion. 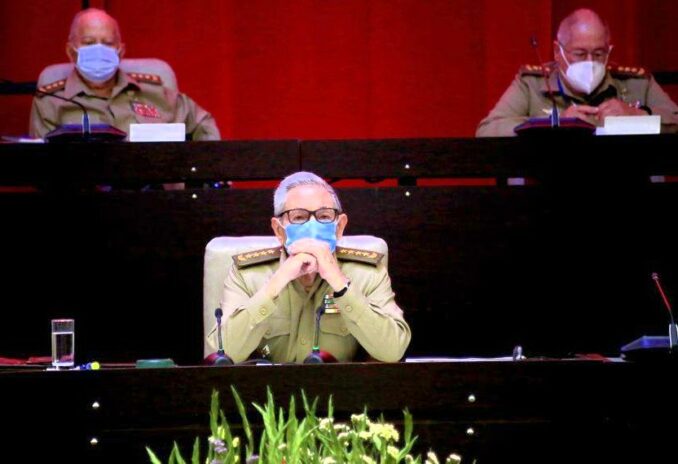 Raúl Castro Ruz at the 8th Congress of the Cuban Communist Party, April 16.

Ending his presentation of the 8th Party Congress Central Report, on the gathering’s opening day, Raúl expressed the satisfaction of having fulfilled his duty and conveyed his confidence in the future of the homeland, but emphasized his unchanging commitment to participate as a member of the party ranks. “I will continue serving as one more revolutionary fighter, ready to make my modest contribution until the end of my life,” he insisted.

The moving historic moment sealed the reading of a Central Report which, in a clear and objective manner, reviewed what had been done over the last five years, with respect to each of the country’s strategic issues.

The first session of the Congress, which will continue through April 19, was also attended by Political Bureau members Miguel Díaz-Canel Bermúdez, President of the Republic; José Ramón Machado Ventura, second secretary; and Esteban Lazo Hernández, President of the National Assembly and Council of State; as well as other Party and government leaders.

In his opening remarks, Machado Ventura asserted that the Party constitutes “a guarantee of national unity and a synthesis of the ideals of dignity, social justice and independence of generations of patriots who preceded us and those who have made these ideas their own, over all these years of struggle and victory.”