Vice President Kamala Harris, while appearing with California Gov. Gavin Newsom, made a stunning remark that illuminated the perilous future ahead due to climate change. Discussing the need for policies to bolster the crumbling infrastructure that is needed to provide adequate water supply nationwide, Harris said: “For years there were wars fought over oil; in a short time there will be wars fought over water.” 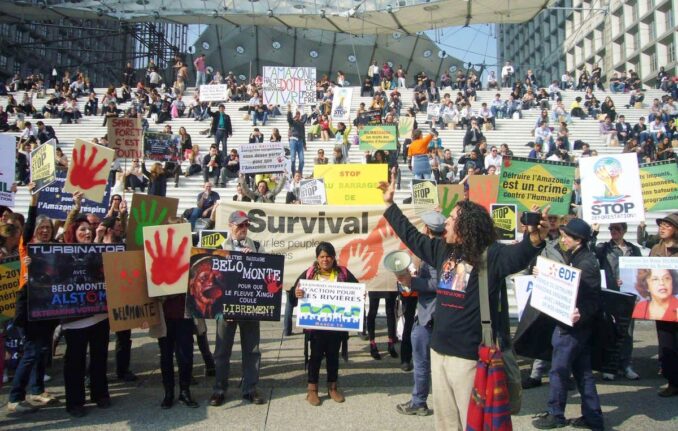 Indigenous-led protest in Paris, 2014 against Brazil’s construction of megadams in the Amazon rainforest. Credit: Survival International

This should serve as a wakeup call for eco-socialists and the U.S. left overall. The U.S. government, alongside the European Union, may “justify” future imperialist endeavors in the name of protecting water supplies and other natural resources.

The same excuse was used two years ago when many who call themselves environmentalists supported the right-wing coup in Bolivia against the re-election of Evo Morales. At the time, fires were burning huge swathes of the Amazon forest, affecting many countries — most notably Brazil and Bolivia. But the western media seemed more focused on demonizing the Morales government, which had gained popularity due to his work alongside grassroots movements, most famously preventing the privatization of the city of Cochabamba’s water supply.

The right-wing president of Brazil, Jair Bolsonaro, infamously defends the destruction of the Amazon to make profits for logging and mining companies. Deforestation will also accelerate the dispossession of the many Indigenous peoples living throughout the Amazon.

Today we hear the rattling of sabers by the United States and the European Union against China, due to the success of its Belt and Road Initiative. Through Chinese investments, many countries in Africa, the Middle East and Central Asia have embarked upon major infrastructure projects, many dealing with the utilization of their natural resources. The BRI also opens a path to a multipolar world that threatens the hegemony of the United States and the European Union. This beneficial development is seen as dangerous by the imperialists.

Central Asia and Africa are now the two main regions where the U.S. can set its sights regarding water supplies. Since the collapse of the Soviet bloc and the privatization of many state-owned industries, tensions have been growing over the ownership of water resources. As seen in the Ukraine, the U.S. imperialists could sponsor groups to lead “color revolutions” and install leaders more favorable to transnational capital. Progressives must watch out for future aggression against governments in Central Asia that refuse to bow down to the threats made by Washington.

Sub-Saharan Africa has plentiful freshwater supplies. They often coincide with the distribution of U.S. bases throughout the continent. AFRICOM, the U.S. military command in Africa, was originally established under the auspices of “fighting terrorism.” In reality, it has been used to ensure that U.S. allied neo-colonial governments remain in power. This dangerous military apparatus serves to ensure that Africa’s natural resources will continue to be extracted and exploited by transnational corporations.

What happens to African nations that pursue paths of economic development to benefit the people instead of transnational corporations? NATO’s intervention in Libya against Muammar Qadaffi in 2011 led to the dissolution of a nation. It also threatened a project nicknamed the “Great Man-Made River,” built to supply fresh water to Libyans. In NATO’s usual brutal imperialist fashion, along with bombing numerous civilians it also targeted the pipes that supplied fresh water to all Libyans.

Now Libya is in a continuous crisis over its water supply as different rebel groups attack distribution infrastructure — even as corporations in Italy and elsewhere make tremendous profits from the privatization of Libya’s energy sector. (www.realinstitutoelcano.org)

Tensions have recently flared between the United States and Ethiopia over construction projects for the Nile River. The Grand Ethiopian Renaissance Dam, supported by the Ethiopian government, claims that “the hydroelectric power produced by the GERD will be vital to meet the energy needs of its 110 million people.” (Aljazeera, April 1) This grand project has met resistance from Egypt and Sudan. Washington, which wants to be a broker in the development of projects on the Nile, could exert leverage on the governments of Sudan and Egypt in order to sabotage cooperation among the three nations.

The U.S. just brokered major agreements which would take Sudan off its terrorism sponsor list as long as Sudan opens diplomatic relations with Israel. (nbcnews) Thus, a lot is at stake in the newfound relationship being built between the Sudanese government and the U.S. History shows that Washington will maneuver graciously – in order to hamper pan-African unity and the sovereignty of nations in the global south.

In the face of apocalyptic climate change, the hegemons of world capitalism are planning on pursuing more wars and imperialist maneuvers in order to profit from the increasing scarcity of freshwater sources. This extremely dangerous and brutal path could ultimately lead to the extinction of humanity if the extractivist and profit-hungry capitalists are not stopped.

Eco-socialists must unite against U.S. and European imperialism. It is our duty to struggle and hamper any effort of the U.S. and the European Union to pursue regime change in the Global South. Our solidarity must be with the masses of the Global South, not with the bourgeoisie of the empire.

The only way out of this apocalyptic environmental crisis is to dismantle the capitalist and imperialist order that caused it in the first place. There is no way to reform our way out. Capitalists will always treat the environment as they treat humans: as commodities. The only true way forward is to smash capitalism, smash imperialism and rebuild a society based upon eco-socialist principles. Then we can begin to plan a people-centered response to ameliorate the effects of climate change and ultimately usher in an era of human and environmental rebirth.