House Bill 1, a bill criminalizing protest in the state of Florida beyond measures that already exist, passed its final Senate committee April 15. It was signed into law April 19 by fascistic Gov. Ron DeSantis, who proposed the bill in September 2020 as a response to the Black Lives Matter uprisings during the summer. This bill makes protesting a felony punishable with up to 15 years in prison, strips away voting rights, protects Confederate statues, denies protesters bail and protects anyone who does bodily harm to protesters, including killing them. HB1 also puts a blanket ban on defunding the police in any way, shape or form across the state.

There is no question that this fascist bill will disproportionately target Black and Brown organizers, who have led the ongoing struggles against capitalism-imperialism and white supremacy across Florida over the last several years. One of those leaders is Jamil Davis, lead organizer for the Florida chapter of Black Voters Matter. He is a Hip-Hop artist and producer under the name Jamal Steele. 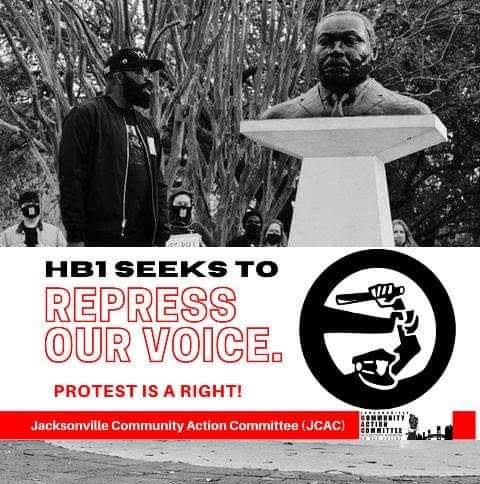 Workers World: You and others have referred to this bill continuously as Jim Crow 2.0. Can you elaborate on how this bill not only harkens back to the days of Jim Crow, but how it also ties into the prison-industrial complex of today to create a new system of Jim Crow laws?

Jamil Davis: With the bill being interpreted by the arresting officer, it’s left to their discretion. We are then left with a bill that has language in it that places us in a place where Black people will be limited in how we can assemble in public. Getting enough people arrested, charged and convicted under these new penalties will create more felons under Florida’s criminal justice system, which not only places more bodies in correctional facilities but eliminates more people from being able to vote. This is a law that will disproportionately affect more Black people because our direct actions and events intimidate the current power structure more, because we use our actions as a tactic to achieve our freedom.

WW: Ron DeSantis and others, including the co-sponsors of the bill, have said that this bill will prevent an incident similar to the one at the U.S. Capitol Jan. 6. What is your response to this?

JD: The Capitol insurrection was performed by right-wing reactionaries who are either tools used by the current power structure or individuals that control the current power structure. It’s these very people who create this type of legislation and have the same folk that were side by side with them to enforce it in a way that will favor their tantrum —  more than organized displays of civil disobedience used to achieve Black Liberation, because that would equal a shift in their power.

WW: The bill has now passed the House and the Senate, largely on party lines. Many organizers and revolutionaries are feeling deterred and defeated right now. Where do we go from here?

JD: This bill will be tied up in litigation soon, but until then we continue to organize and use public assembly knowing the consequences. We will win. We should not allow intimidation and fear to prevent us from achieving liberation. This is only a setback, not a fatality.

Devin Cole is a transgender Marxist organizer and writer. They are the president of Strive (Socialist Trans Initiative), a transgender advocacy organization in northwest Florida, and a member of the Workers World Party —  Central Gulf Coast (Alabama, Florida, and Mississippi) branch.