April 18 — Miners at Warrior Met Coal in Brookwood, Ala., struck April 1 and are still picketing as of this writing. On April 9 they voted 1,006 to 45 to reject a contract that would have restored only $1.50 of a $6-an-hour pay cut workers took in 2016 — to pull the company out of bankruptcy. The rejected contract would have continued brutal disciplinary and firing policies and dangerous working conditions. (See Workers World, “After BAmazon, Alabama mine workers go out on strike,” April 2) 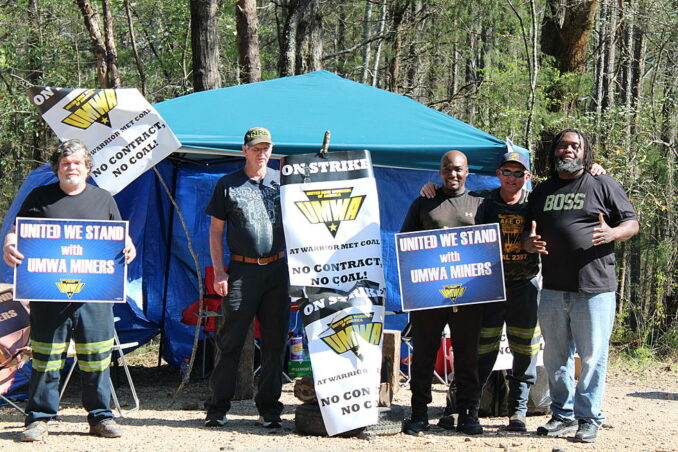 On strike in Brookwood, Ala., April 8.

Photos on social media showed workers and their children burning copies of the contract. One picture of a miner’s hand on top of a “No” ballot revealed a missing index finger — lost in a mine accident.

The miners labor in one of the world’s most life-threatening workplaces. The Brookwood mines are sunk 1,400 to 2,100 feet underground — some of the deepest vertical shaft coal mines in North America. In 2001 methane gas explosions and a cave-in at one of the mines killed 13 workers, including a former high school classmate of this writer.

The Black and white members of Local 2245, United Mine Workers (UMWA) on strike are functioning in tight solidarity. As one said: “The union backs us . . . if it wasn’t for them, that would be a death house. It is a death house.” (tinyurl.com/hb9mkr)

On April 11 a contingent of striking miners traveled to Bessemer, Ala. — 25 miles to the east — to attend a “Hold Amazon Accountable” rally. They were there in solidarity with the majority Black, majority female Amazon warehouse workers, who had launched a historic organizing drive against the corporate behemoth. (See Workers World, “Bessemer: the whole world is watching,” Feb. 22)

Larry Spencer, president of the Alabama Coalition of Black Trade Unionists, voiced solidarity with the miners and invited workers to join the CBTU. Amazon worker and organizer Jennifer Bates said: “We came out to fight for the rights of working people, and we aren’t going anywhere. The fire has started. Burn — let it burn!” (Listen to the rally: tinyurl.com/368yyx8v.)

The miners’ solidarity was more than symbolic. The longwall machines that grind up their lives are their equivalent of the mechanization and robotization that Amazon uses to squeeze profit from workers’ labor power. (See Workers World, “Workers are not robots,” March 8)

A key demand by BAmazon workers seeking union representation by the Retail, Warehouse and Department Store Union was for more control over backbreaking working conditions. Amazon alleges that monitoring workers through the Mojoul SmartBelt has improved “safety,” but research suggests ramped-up robotics have actually increased injuries.

In 2019, Amazon recorded 14,000 serious injuries across its “fulfillment centers” — its warehouses — equating to an injury rate of 7.7 serious injuries per 100 employees, nearly double the industry average. Plus it’s possible that Amazon is underreporting worker injuries. (tinyurl.com/2z7w6r4h)

The Walker Met mines in Tuscaloosa County — and other coal mines, past and present in adjoining Walker, Jefferson, Shelby and Bibb counties, like the mines of Belle Ellen, Marvel and Piper — are part of the “Birmingham Mineral District.” These mines are in the southernmost extension of the Appalachian Mountain chain in Alabama.

The exploitation of both mineral resources and mine workers has gone on for two centuries.

For just as long, that exploitation has been met with resistance. Labor organizations, primarily of African American miners, were formed in the 1870s. Alabama miners affiliated with the newly formed UMWA in 1890 as District 20. Opposition to the convict lease system sparked the largest strike in the District’s history — the Great Strike of 1894.

During the Great Depression, Alabama UMWA locals were revived under the leadership of Walter Jones, an African American organizer from Shelby County. In the 1930s the International Union of Mine, Mill and Smelter Workers organized iron ore workers, who were about 80% African American. (Encyclopedia of Alabama)

The Brookwood strike and the recent Amazon organizing have been led by local Bessemer workers — children, grandchildren and great-grandchildren of union heroes. For many of the miners, this is their first strike, but they proudly claim their tradition of labor militancy.

Jeff Fleenor, who has worked at Warrior Met and its predecessor for 16 years, told the Tuscaloosa Thread: “I specifically came back [for the vote] to ensure we got a fair contract and that I wasn’t the generation that let all the sacrifices that people in the UMWA fought for 90 to 100 years ago fade into obscurity. Our sacrifices pale in comparison to those at the start of the labor movement and the early years of the UMWA. I keep up on my history; I know about the Battle of Blair Mountain, Bloody Harlan and the Pittston Strike, where my dad participated. These were major milestone events that led us to where we are today. I owe it to miners of days gone by, my family and myself to fight for what we deserve.” (tinyurl.com/y2pbcm3h)