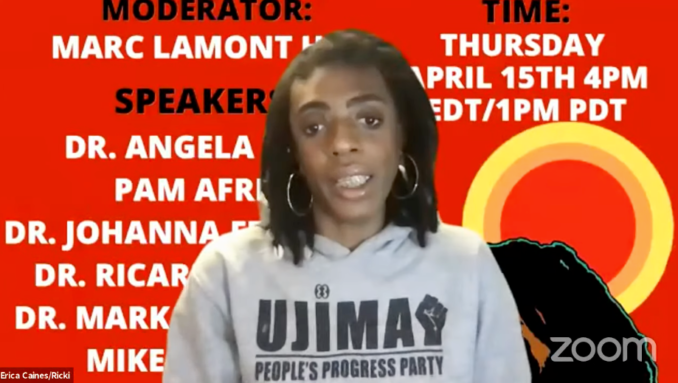 This lightly edited presentation was given by Erica Caines, with Black Alliance for Peace and Hood Communist editor, at an April 15 press conference to demand the immediate release of Mumia Abu-Jamal.

I am a member of the Black Alliance for Peace, and I’m also co-editor of the African revolutionary blog Hood Communists. I’m very honored to speak a bit about Mumia Abu-Jamal and his present influence on this movement era.

Mumia once said that prison is a second-by-second assault on the soul, a day-to-day degradation of the self, an oppressive steel-and-brick umbrella that transforms seconds into hours and hours into days. In Mumia’s case, the state of Pennsylvania is deeply invested in ensuring that there will be no more days for him.

Instead of adhering to the longtime demands of the people to free Mumia, the state, including Philadelphia’s popular progressive prosecutor [Larry Krasner], has refused to do so.

Learning about Mumia’s case, I’ve gotten more opportunities to publicly advocate on behalf of his freedom. This has especially opened my eyes to the delusions of any justice being found within the U.S. justice system. It has been clear since the three-decades fight to remove Mumia from death row was won, that he is being punished for not dying, both then and now.

However, despite these realities of the prison system and his unjust trial and sentencing, Mumia’s invaluable voice and clear analysis of our material circumstances as Black people within the U.S. could be heard on Prison Radio or read in one of his many books, like “Have Black Lives Ever Mattered?” Or “Murder, Incorporated” — all produced from behind the prison walls, encouraging, informing and inspiring countless youth who are marching and organizing around a collective demand that our Black lives do, in fact, matter.

Mumia does not simply serve as a point of inspiration. Mumia and all political prisoners who are aging away and dying — rest in peace to Chip Fitzgerald — behind prison walls serve as a warning to any of us who refuse to normalize this settler-colonial state that depicts Blackness as innately criminal and Black people as deserving of injustice.

So brick by brick and wall by wall, we’re going to free Mumia Abu-Jamal. May we all catch one another in the whirlwind.