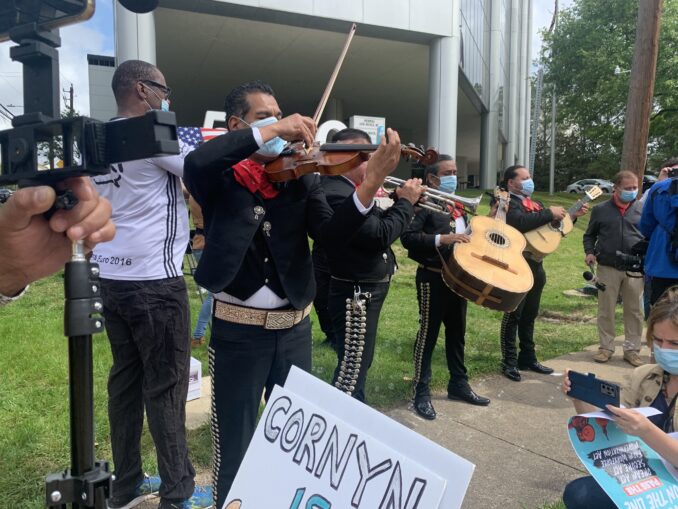 Young activists with United We Dream held demonstrations outside the office of Texas Sen. John Cornyn and the house of Sen. Ted Cruz April 6 in Houston. They contend that lives are on the line and demand passage of the DREAM Act, the SECURE Act for people with Temporary Protected Status and the Farm Workforce Modernization Act.

As protesters arrived, the group Mariachi Calmecac fired up their instruments and played old favorites, including La Cucaracha [the cockroach] with a reference to Ted Cruz. News reporters interviewed the youth. There were homemade signs as well as preprinted ones, all in support of immigrants and DREAMERS, TPSers and farmworkers.

Several youth took turns on the bullhorn, energizing the crowd that kept growing. Houston cops tried to intimidate, but this was a futile job for them as the chanting grew ever louder: “Undocumented and Unafraid!”

“Familias Inmigrantes y Estudiantes en la Lucha is here in solidarity with United We Dream, with Indivisible Houston and everyone who is here today because we are here for the same reason. I know we are here to stay! I came here when I was five years old, and I will turn 36 this year. I haven’t been home to Mexico in over 30 years. I am undocumented and unafraid, and I am here to stay,” said Cesar Espinosa.

“I will continue to fight alongside each one of you, not only the DREAMER community, but for everyone who deserves to have their status corrected, including our hardworking parents, our essential workers,” he told the cheering crowd. “I am undocumented and unafraid!”

The Development, Relief, and Education for Alien Minors Act, known as the DREAM Act, would grant temporary conditional residency, with the right to work, to unauthorized immigrants who entered the U.S. as children. It was first proposed in 2001 and has been reintroduced several times, but has never passed either the U.S. House or the Senate.

According to the Immigration Law Center: “The DREAM Act gives undocumented students including high school valedictorians, varsity sports stars and class presidents a way to obtain legal residency. Often these youth were brought to the U.S. by their parents at a very young age. They’ve lived much of their lives in the U.S. and have flourished academically and socially. More often than not, they’re deeply rooted in their communities through church work, volunteering and other extracurricular activities.”

Former President Donald Trump tried to end DACA, Deferred Action for Childhood Arrivals, but last June the U.S. Supreme Court blocked his administration’s effort. This brought relief to untold numbers of people — youth and their whole families. Many of these youth have now finished high school and college, some earning master’s degrees and even Ph.D.s. Many now have their own children who are U.S. citizens.

DACA was introduced by President Barack Obama on June 15, 2012. It has allowed immigrants who were born after June 16, 1981, who arrived in the U.S. before age 16, and who have lived here since June 15, 2007, to be eligible to legally work and be protected from deportation. This status had to be renewed every two years.

A version of the DREAM Act was included in the American Dream and Promise Act, which actually passed in a bipartisan vote by the U.S. House of Representatives in June 2019. There is now a related bill introduced in the U.S. Senate, but it has yet to be considered by the full Senate.

When the protest was in front of Senator Cruz’s house, a car with a huge white spider on top kept circling the block of mansions in Houston’s wealthiest neighborhood. One DREAMER explained that Cruz is like a spider, but instead of spinning webs, he spins lies about immigrants and DREAMERS.

United We Dream announced: “In a historic victory for our movement, the House of Representatives passed the Dream and Promise Act and the Farm Workforce Modernization Act, two bills that would provide a pathway to citizenship for over 5 million immigrant youth, TPS and Deferred Enforced Departure holders, and undocumented farmworkers living in the U.S.

“The Senate must bring the Dream Act, the SECURE Act (the Senate counterpart to Dream and Promise Act), and the Farm Workforce Modernization bills to the floor by April 30.”

UWD is asking all supporters to send a letter or contact their U.S. senators — and demand they vote YES on The Dream Act, the SECURE Act, and the Farm Workforce Modernization Act.