Gaza is located on the western side of occupied Palestine and has been under Israeli military control since 1967. With a population of 2 million, it is one of the most densely populated places on the planet. It is frequently referred to as an “open-air prison,” as the Israeli occupation forces have effectively blockaded it on all sides, including its shores on the Mediterranean Sea. To the south, the government of Egypt also polices a border that keeps Palestinians from fleeing the increasingly desperate conditions imposed upon them. Of the Palestinians in Gaza, 70% are officially listed as “refugees” in their own country. (Al-Jazeera, March 30, 2019)

The COVID pandemic has been weaponized by the Israeli occupiers against the people of Palestine. As Mahmoud Abu Saaman, a worker at the Palestinian Ministry of Communication, commented to Al-Jazeera, “People in Gaza had enough in their lives, moving from a crisis to another without a break. . . . This is a blockade within a blockade. It’s not the coronavirus, but the ongoing blockade that has destroyed our lives.” (tinyurl.com/49wf8tsk)

As of March 15, 50% of Israel’s population had been fully vaccinated, and 60% had received their first dose. (tinyurl.com/3m34zmvw) But Israel is refusing to share vaccines with Palestinians and has blocked delivery of Russian vaccines designated for prisoners in Gaza. Israel’s denial of lifesaving vaccines will result in countless deaths. Yet Article 56 of the Fourth Geneva Convention requires Israel, as the occupying power in the Palestinian territories, to provide medical supplies, including preventative measures, to stop the spread of contagious epidemics. The Zionist state is violating this protocol. (Workers World, March 10) 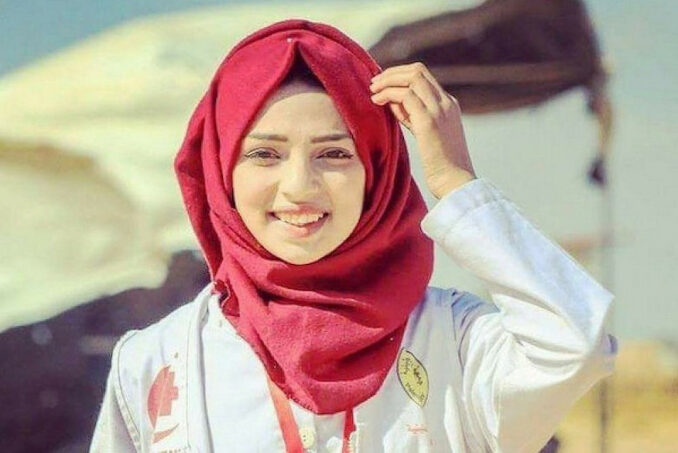 Three years ago, Palestinians met the ongoing blockade with a series of prolonged protests known as the “Great March of Return.” These first began in Gaza March 30, 2018. Palestinians demonstrated along the boundary area between Gaza and the rest of Zionist-occupied Palestine for 18 months.

In part because the state of Israel refuses to declare its borders under international law, occupation forces regularly murder Palestinians on both sides of this boundary zone. Electronic Intifada reports that 29,000 Palestinians were wounded by Israeli occupation forces during 2018, and nearly 300 were killed. (Dec. 27, 2018)

At least 48 of those killed by the Israeli military during this period were children. Nine of the slain protesters were people with disabilities, including 29-year-old Saber al-Ashqar, who had used a wheelchair since losing both his legs to an Israeli bombing in 2008. (Buzzfeed, May 15, 2018)

The majority of these murders were committed by military snipers targeting protesters at a distance. The U.N. Office for the Coordination of Humanitarian Affairs estimates that 2018 was the most violent year of Israeli aggression against Palestinians since the agency began collecting data in 2005. (Electronic Intifada, July 28, 2020)

Protesting the blockade of Palestine

Throughout the spring of 2018, simultaneous with the Great March of Return, protesters in the U.S. and Europe picketed concerts put on by the Philadelphia Orchestra, which toured occupied Palestine at the invitation of the Israeli government, while it was murdering protesters. Demonstrators participating in the “Philly Don’t Orchestrate Apartheid” campaign interrupted the orchestra’s performances in Philadelphia, Belgium, France and Germany, before they landed in occupied Palestine to give Israeli soldiers music lessons. (Workers World, April 24, 2018)

The international campaign particularly focuses on Elbit’s ten sites within Britain including four arms factories, according to Samidoun: Palestinian Prisoners Solidarity Network. In February, activists blocked the entrance to an Elbit arms factory near Manchester, covered the building with red paint, chained themselves to the gates and temporarily shut down the factory.