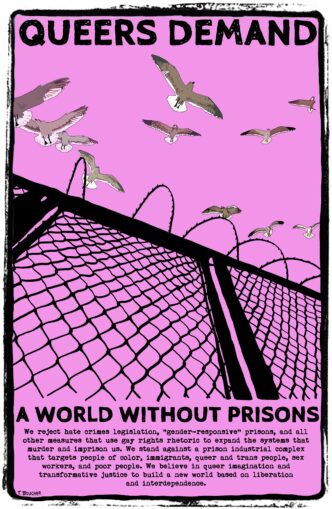 Imprisoned in Georgia, Ashley Diamond was raped 14 times by both sexually violent inmates and prison staff. This was after a guard talked about her gender identity using slurs like “freak” and “it.” With the aid of the Center for Constitutional Rights and the Southern Poverty Law Center, Diamond is suing the Georgia Department of Corrections for placing her in a men’s facility.

Trans women, in most cases, are either incarcerated with cis men or put into special queer-centric pods, if available. As seen in Diamond’s case, guards either do nothing to protect trans people, or they make their experience worse by assaulting them or letting other incarcerated people assault them.

In Michigan, an incarcerated person identified as Jane Doe sued the Department of Corrections March 2 for mistreatment after they placed her in a cell with a convicted rapist and murderer, who assaulted her multiple times. She was supposed to be sent to the G. Robert Cotton Correctional Facility for people with gender dysphoria, but that never happened. The correctional officers were responsible for this horrid example of transmisogynistic violence. In fact, any complaints or requests from her were met with threats.

While physical violence is highly common against trans women in prison, other forms of violence abound, including the deliberate defeminization of trans women. Trans women are stripped of everything that makes them feel feminine, including prescribed hormones like estrogen or progesterone and testosterone blockers like spironolactone. Hormone replacement therapy is medically necessary for trans women, yet often prison doctors deny access to that treatment.

In 2016 an update of the National Transgender Discrimination Survey was released called “Injustice at Every Turn: A Report of the National Transgender Discrimination Survey.” It found that a whopping 37% of incarcerated trans people are mistreated by correctional officers. Further, 41% of Black and 21% of Latinx trans people report being put in a holding cell because of their gender nonconformance.

Additionally, 47% of Black and 30% of Indigenous trans people report being sent to prison or jail for any reason. Because trans women often have to resort to “criminality” to survive on the streets, this makes them targets of the “criminal justice” system. Police harass trans women — just for walking while transgender — which results in their being imprisoned unjustly.

Rae Rollins, a transgender woman sentenced to the Edna Mahan Correctional Facility for Women, filed a lawsuit in New Jersey Superior Court March 19, alleging she required hospital attention after she was beaten, punched and kicked by prison guards. The attack on Rollins was one of a series of violent staff attacks against incarcerated people on Jan. 11 and 12. Other incarcerated people were forcibly removed from their cells by violent staff who invaded and tore apart their cells. One person was beaten so badly, their skull was broken, though not fatally.

Rollins’ lawsuit named the New Jersey Department of Corrections, Commissioner Marcus Hicks and staff at the facility, which has never been a humane place for incarcerated woman. Under capitalism no prison will ever be humane, but this particular prison is the worst women’s facility and one of the worst facilities in general. While eight of the staff were arrested, there still remain staff who treat the incarcerated women, especially trans women, as less than human.

Hopefully, Rae Rollins’ lawsuit will be one of the nails in the EMCFW’s coffin. The lawsuit cites a toxic environment, made more toxic by the presence of transphobic staff who mistreated her. It states: “. . . the large-scale attack on multiple incarcerated individuals on Jan. 11, 2021, and the continuing course of verbal abuse, physical abuse and relation against Plaintiff constitute a violation of her constitutional right to be free from cruel and unusual punishment.”

The lawsuit and the punishment of eight EMCFW staff have led lawmakers in New Jersey to demand the removal or resignation of NJ DOC Commissioner Hicks, who claims he plans to reform EMCFW to make it more humane. An independent investigator was brought on by Gov. Phil Murphy.

As Marxist-Leninists, we know that prisons under capitalism are inhumane and cannot be reformed. They act as concentration camps for the working class, in particular Black, Latinx, Indigenous and gender oppressed. We must put pressure on the profit-driven corporations that drive this injustice system. We must demand prison abolition and reparations for all the mental and physical abuse incarcerated workers have been made to suffer.

Power to Ashley Diamond! Power to Jane Doe! Power to Rae Rollins! Free them all!