Bryant Arroyo, an incarcerated worker at Pennsylvania SCI Frackville, was placed in isolated custody for several days — in other words, thrown in the hole — for suggesting to friends and family that they keep their recordings of video conference calls and share what he says through social media, so the public can learn how bad the PA Department of Corrections treats incarcerated people. 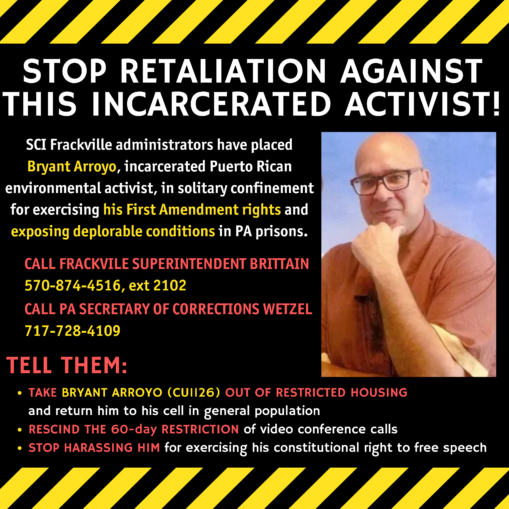 To attend a Skype hearing April 5, Arroyo was made to wear a bright orange jumpsuit, hands cuffed behind his back and chained, while never leaving SCI Frackville — the hearing officers were in SCI Mahanoy.

He was found not guilty on 2 of 3 charges and returned to the general population. Arroyo’s only “crime” was free speech, but officials punished him by denying him access to video conference calls for 60 days. On April 7, he was returned to isolation for “observation” for 15 days, while officials conduct further investigations.

Friends and supporters of Bryant have since been contacted by Frackville Superintendent Kathy Brittain and told their visits with him will be restricted indefinitely. Arroyo is a well-known advocate for environmental justice, who has been outspoken against abuse by the PA DOC, especially during the COVID crisis.