April 9 — The latest polls before the April 11 runoff presidential election here revealed high percentages of null votes and undecided voters and little space between the two candidates. During the last four years, the dominant ruling elites never ceased their desperate and blatantly undemocratic destruction of the Citizens’ Revolution (RC) in an attempt to maintain their hold on state power. This makes the election’s stakes high for Ecuador’s workers. 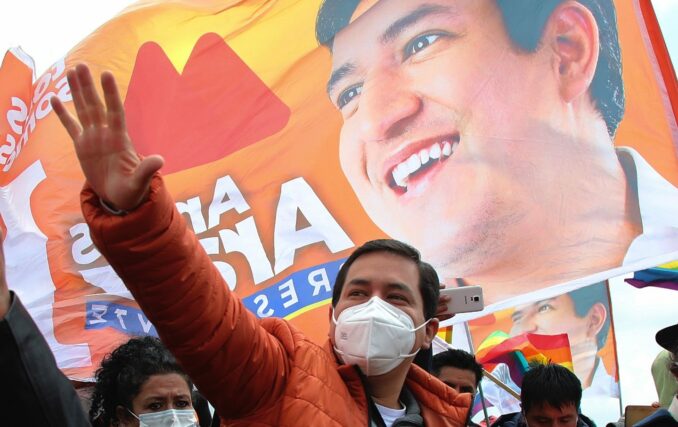 Arauz’s opponent, banker Guillermo Lasso, is running on the CREO-Social Christian ticket and is closely associated with incumbent Lenín Moreno’s regime. In 2017, Lasso lost to Moreno, who is now considered the “worst president” in the history of Ecuador. After winning, Moreno began implementing banker Lasso’s agenda.

In his characteristic stealth mode, Lasso co-governed with the traitor Moreno, who bows to the dictates of the International Monetary Fund and kneels before the U.S. State Department.

Nevertheless, elections indicate what the masses of people want. It is reasonable that millions of Ecuadorians see this election as a matter of life and death. Millions have been driven into poverty by IMF-imposed austerity measures before and during the COVID crisis under the Moreno-Lasso program. Youth are without work, education and a future.

Women have multiple economic issues; they have no access to legal abortion even in the case of rape and are victims of rampant femicide. Women are highly exploited as unpaid laborers and low-wage workers in the precarious informal economy that employs more than half of the working class.

LGBTIQ+ people are a marginalized population virtually without civil rights. Child labor reached 8.9% of all children aged 5-14 years in 2019, when it was last recorded before the pandemic, the highest percentage in 12 years.

Some 38% of Ecuadorians live in poverty. Rural populations suffer most, according to the National Institute of Statistics and Census (INEC), with poverty increasing from 68% to 71% in 2019. Under Moreno, another 1.87 million people entered poverty, with a total of 1.17 million people living in extreme poverty, out of a population of just under 18 million. Moreno imposed a total wage freeze on all workers as the income of the elites soared.

Unemployment ravages Ecuador, especially since the pandemic. Precarious underemployment and self-employment is the norm.

In 12 months the COVID-19 catastrophe has produced 50,157 deaths more than the previous 12 months. That’s 2,950 deaths per million people. Even worse for Ecuador, the government exploited the pandemic as a shield to enact the antisocial IMF package of austerity measures which were first announced in March 2019.

Moreno and Lasso promote xenophobia against Venezuela. Moreno’s only accomplishment in three and a half years has been to dismantle the Citizens’ Revolution. Moreno failed as a president, and he failed to stop the movement led by former president Rafael Correa from contesting this election.

Programs of the two contenders

Facing off in this election are two opposing visions of the state to manage a capitalist Ecuador.

Lasso would consolidate neoliberalism: He supports the privatization of the Central Bank of Ecuador and would drop the government into the lap of the elites. He would try to finish off the citizens’ revolution with four more years of persecution, blocking the return of the exiled leaders.

Lasso wants labor flexibility for the masses and privatizations for the superrich. He would cut taxes for the rich and expand the forces of repression. He would submit to U.S. domination for the benefit of the elite owners of big capital — national and foreign.

Arauz promises to provide a $1,000 bonus to one million poor families. He conceives of a “post-Keynesian” welfare state that would tax the rich, impede the drainage of resources and develop human capital in a knowledge-based economy. Arauz promises to open space for a constitutionally protected struggle to advance society toward a plurinational state, that would combat racism and violence against women and unite the peoples in participatory democracy.

Arauz says he would promote dignity and national sovereignty, support cooperation with other Latin American countries — for example, UNASUR — and especially solidarize with the progressive governments of the region.

Neither of two central labor councils, which represent 4% of Ecuador’s workers, have joined UNES. The labor council bureaucrats are either colluding with right-wing candidate on the CREO-Social Christian ticket Guillermo Lasso or they are advocating a null vote.

The complex mosaic of Indigenous peoples, Afro-Ecuadorians, Mestizos and whites fractures along the lines of race, region, class and gender. Here in beautiful Imbabura province, most voters backed Arauz in the first round of Ecuador’s  elections Feb. 7. Facebook, WhatsApp and Tik Tok were the most powerful tools of communication for this election, although brigades of Arauz supporters have knocked on doors and leafleted.

Sixteen-year-olds have the right to vote in Ecuador. The youth have the most to gain or lose in this election. They are the target of slick Tik Tok messages that have distorted the electoral process, in which 15 competing candidates all attacked the “Correista” Andrés Arauz and obscured compelling issues in the first round.

Unemployment, especially youth unemployment, and the sharp increase in poverty grievously affect the health and welfare of the agricultural workers. Will those many who reject Moreno, also reject Lasso?

The Indigenous movement is fragmented but still very strong. The Confederation of Indigenous Nationalities of Ecuador (CONAIE) is advocating a controversial “ideological null vote.” CONAIE is warning the next government that they are prepared to go with their communities into the streets again as they did in October 2019. That social explosion, sparked by an IMF austerity program, had the approval of 85% of the population.

Following the rebellion, Moreno retaliated by jailing three RC leaders and 27 Indigenous leaders on phony charges of inciting the uprising. He also expelled 382 Cuban doctors, whose work aided Ecuador’s poorest people and might have helped contain the pandemic.

Lasso notoriously backed the repression of the October 2019 revolt. One week ago, outraged Ecuadorians blocked Lasso’s caravan of luxury vehicles from entering a small Andean village, Guamote, on Easter Sunday. During Guamote Mayor Delfín Quishpe’s Youtube video of the confrontation, he condemned Lasso for cheering on state repression and blamed him for the death of local community leader Édgar Yucailla.

The Indigenous and Mestizo peasants of the Andes and the coastal provinces produce almost all the food consumed by Ecuadorians. They are suffering malnutrition and have been especially oppressed by the Moreno government during the pandemic. The CONAIE promotes a null vote because of the long-standing disputes between CONAIE and Correa-ism over criminalizing the Indigenous form of justice, organization in the territories where Indigenous communities are located, the school system and water management.

Indigenous-led protests against mining and “extractivismo” (oil exploitation) were repressed and criminalized under the government of Correa from 2007 to 2017.

The options for a “progressive” solution to the great crisis here are limited by laws enacted since then. If Andrés Arauz is elected, he will need to keep his promise to promote participatory democracy.

Workers World interviewed a sampling of people from the Indigenous community, who said that they and their communities were voting for Arauz.