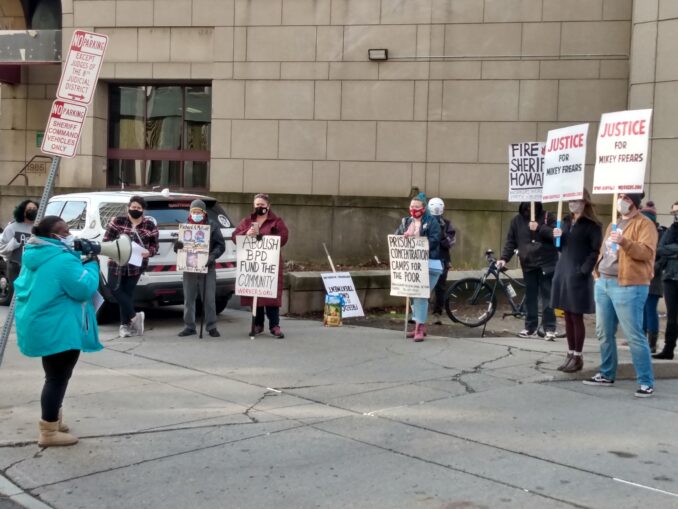 Workers World Party members and people from the community gathered outside the Erie County Holding Center, N.Y., on March 31 in response to the March 13 death of Mikey Frears. Frears was the 36th person to die in the Holding Center since Sheriff Tim Howard took office in 2005.

Demonstrators demanded that Sheriff Tim Howard resign, that addiction be treated through treatment and not through incarceration, and for abolition of the unjust prison system.

The U.S. prison system continues to prey on the working class. For decades, the system has been profiting from the labor of prisoners while paying them a minuscule amount in wages and isolating them from their community. Specifically in locations like the Holding Center, individuals are held before going to trial. And any death in these holding centers or jails happens because the administration refuses to care for the people inside and dehumanizes them to the point where they deny them basic care.

Speakers at the event included Workers World members Ezra Echo and Arjae Red and community members Monica Lynch and Chuck Culhane. Lynch spoke of her experience dealing with the death of her brother, Connell Burrell, who died in the Holding Center Aug. 2, 2019.