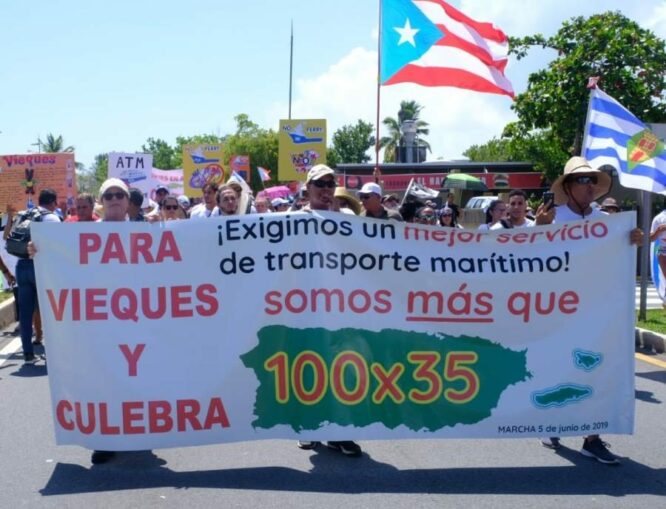 On April 2 while Catholics worldwide observed Good Friday, the people of Culebra and Vieques Islands took to the streets to protest the malfunctioning maritime transportation system. Their outcry for justice echoed with the chants: “We want transportation with dignity and efficiency,” “The waterway is our road — it is not luxury” and “We denounce inhumanity and unite our hands.”

The islands of Culebra and Vieques are part of the archipelago of islands that constitute Puerto Rico, which has been a colony of the United States for the past 123 years.

Residents of these islands confront daily an unpredictable and challenging ferry service. Problems include overbooked reservations and sometimes cancellation  of the ferry altogether. The waterway is the main transit route connecting Vieques and Culebra to the main island, Puerto Rico. Lack of access jeopardizes employment, education and health care.

Vieques has no hospital. The most vulnerable patients — those on dialysis and those receiving treatments for cancer — are left without vital medical services. This maritime system disruption has contributed to food shortages, since most of the food on these islands is imported.

On March 28, the many residents of the two small islands, having exhausted petitions and meetings with legislators to remedy this urgent crisis, took to the sea in kayaks and small boats to block the ferries and prevent them from leaving the port.

Dolly Camareno Díaz, a candidate in the last elections for the mayor of Culebra, was one of the leaders of the protest in a kayak and one of many women who prevented the ferry service from leaving the port. Despite several arrests and fines, protesters deemed this action necessary to give visibility to and amplify their demands. They vowed to continue their fight for justice.

News outlets covered the story both within Puerto Rico and internationally. Some of the demands put forth were the designation of maritime services as an essential service, participation of residents in decision-making and the designation of representatives of the maritime transportation system to ensure accessibility of designated round trips to residents of the islands.

A top priority is the immediate cancellation of the current contract with the Authority for Public-Private Partnerships (APP), which was procured under questionable circumstances with disastrous effects for residents who rely on ferry services.

The passage by the U.S. Congress of the Puerto Rica Oversight, Management, and Economic Stability Act (PROMESA) in 2016 has had devastating consequences on the people of Puerto Rico. Passing this law was a direct outcome of the $72 billion debt the government of Puerto Rico has incurred as a result of its colonial relationship to the United States.

PROMESA facilitated the imposition of an unelected seven-member fiscal control board appointed by the United States Congress to administer Puerto Rico’s government finances. This board’s stated mission is to restructure the debt. In reality, it serves as a collection agency that seeks payment of the debt on behalf of bondholders and vulture capitalists at the expense of the people of Puerto Rico.

As the megaphones sound off, chants among protesters reject the threat of displacement: “They want to gentrify, but we won’t allow it.”

In the aftermath of Hurricanes Irma and María in 2017, a flood of investors have come to Puerto Rico to buy properties at an alarming rate, particularly on the islands of Vieques and Culebra. As investors exploit laws that create tax advantages for millionaires, the fiscal control board continues to implement austerity measures, further impoverishing the Puerto Rican people.

The people of Culebra, Vieques and the mainland will continue to take their struggle to the streets or the sea as they face austerity measures, privatization, school closings, reductions of essential services and the selling of land and natural resources.

The people of the islands of Vieques and Culebra have been at the forefront of struggles for decades. They galvanized international solidarity and support in their historic removal of the United States Navy and its war maneuvers. Their victory resonates as one of the most outstanding people’s victories.

Once again international solidarity is needed to support their struggle for essential maritime services and against gentrification and displacement. The root cause of these problems is their colonial status, which can only be resolved with the  independence of Puerto Rico.

As of April 6, a series of protests have been scheduled in the streets of Puerto Rico clamoring for justice on issues of environmental racism. Some of the issues are coal ash deposits, energy privatization and the sales of public lands and beaches.

A seven-part virtual series of panels on Thursdays with English and Spanish translation will discuss the colonial complexities facing the Puerto Rican people, starting April 15 and ending May 27. These panels will be held in conjunction with the documentary “Landfall,” that explores the colonial relationship of Puerto Rico and how that relationship has unfolded in the aftermath of Hurricane María.

Please visit the facebook page of A Call to Action on Puerto Rico to receive updates about the evolving situation of Puerto Rico.