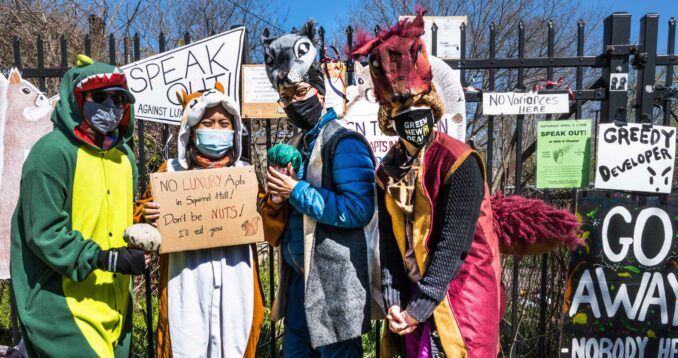 Protesters dressed as squirrels gather after rally against gentrification of Squirrel Hill neighborhood.

Protect Squirrel Hill, a coalition of neighbors in the Squirrel Hill area of West Philadelphia, rallied April 3 against a proposed luxury apartment building. About 75 people took part in the event, held four days before a critical vote at a Zoning Board of Adjustments hearing.

“I see myself and others in my building being displaced if this gets built,” said Cindy Lou, a resident at 4725 Chester Ave., a 40-unit apartment building constructed in 1925, which is across the street from the site of the proposed development. “Most people I’ve spoken with in my building pay around $750 per month for a one-bedroom. The monstrosity they’re proposing across the street will charge twice that.

“Once they start leasing for those prices, other landlords will follow,” she explained. “Older, long-term residents like myself will get pushed out. I’ve been in this neighborhood for 35 years. I’m organizing with my neighbors because none of us can afford this.”

In the group’s press release Yinka Read shared: “I have repeatedly found myself asking, both aloud and internally, ‘Where are the poor Black and Brown people?!’ I am often one of two or three Black people in the community meetings. This last year has been incredibly traumatizing for communities of color and following the status quo no longer feels like an option. Race and class are inextricably linked in this country. Supporting the project as it currently stands feels like complicity with white supremacy, with gentrification, with systemic racism and with the continued marginalization of poor people of color.”

Protect Squirrel Hill supports the principles of community care, non-displacement and protecting the vibrant, diverse neighborhood of Squirrel Hill from the atrocities of gentrification. They can be contacted at [email protected] 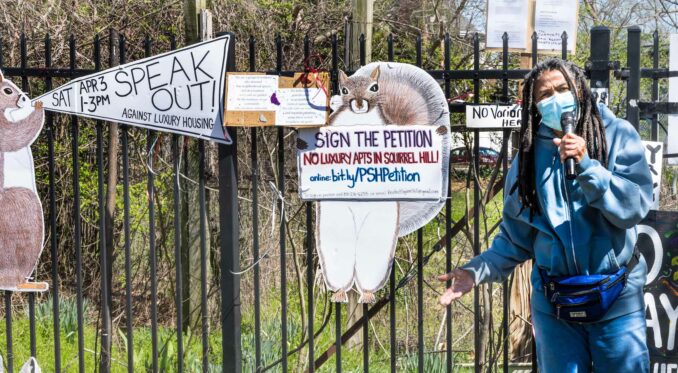