Major League Baseball announced April 2 that its annual All-Star Game, scheduled for July 13, would be moved from Atlanta to an out-of-state site to protest a blatant new attack on the right to vote in Georgia. Related events would also be moved. 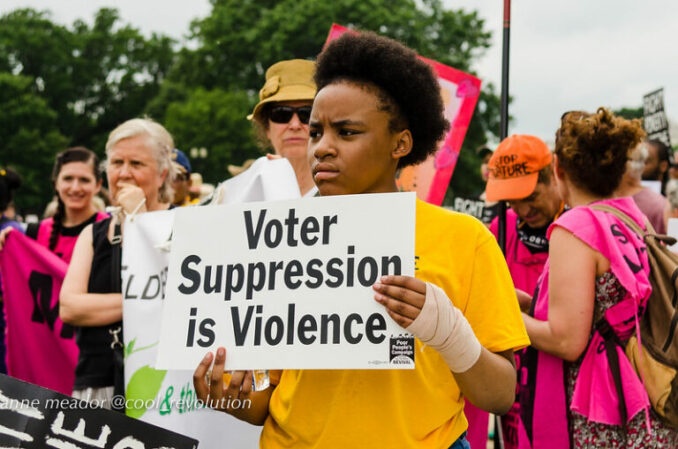 A similar stance was taken in 2017 when the National Basketball Association moved its annual All-Star Game out of Charlotte, N.C., due to the passing of a state law that discriminated against lesbian, gay, bisexual and transgender people.

On March 26, Republican Governor Brian Kemp signed a reactionary law severely restricting voting rights in Georgia. As Kemp signed the bill, he was surrounded by several white male Republicans standing in front of a landscape glorifying a plantation in the days of slavery. Georgia’s law has been met with mass opposition and protest in the state and around the country — and rightfully so.

The law has several components that negatively affect poor people, people in oppressed communities, people with disabilities and workers with restrictive schedules. Absentee voters will be required to submit driver’s license numbers or other documentation as a new regulation for checking identity, replacing the signature matching processes. This will impact over 200,000 Georgia voters who lack a driver’s license or state identification card, forcing them to submit additional proof of their identities.

The bill will cut the time for early voting from four weeks to one week. Drop boxes for ballots won’t be available to voters at various early voting locations during the last four days of an election, when it can be too late to mail ballots for timely arrival.

And people will be prohibited from distributing food and water to voters standing in line for long hours, which happened in polling places mainly within Black and Brown communities during the 2020 election.

The bill was pushed through by state Republicans in revenge for Trump losing Georgia during the presidential election, thanks to mass pro-Biden absentee ballots from the Black community. Republicans in 43 other U.S. states are attempting to get similar laws passed.

Georgia State Representative Park Cannon, a Black woman, was arrested on March 26 by three large white state troopers when she tried to confront Kemp in his office as he was signing the reactionary law. Cannon’s arrest for fighting voter suppression was reminiscent of the terrifying days when Black people were physically assaulted, arrested and killed by white police officers during voting rights campaigns in the South, before the Voting Rights Act was signed in 1965.

Impact of politics on sports

The MLB stance on this bill is a significant political development, considering that less than 8% of the league’s players are Black players. With the COVID pandemic fueling layoffs and closing businesses, the loss of the All-Star Game will mean millions more dollars in lost revenue for Atlanta and the state of Georgia.

MLB Commissioner Rob Manfred stated that he had consulted with baseball teams, current and former players, the MLB Players Association, the Players Alliance and others about moving the game.

A number of corporations based in Atlanta — such as Coca-Cola and Delta Airlines — agreed with the decision not to have Atlanta host the game. Black Voters Matter, a national community-organizing advocacy group for Black voters, criticized these same corporations for not doing more to stop the bill before it became law.

The Atlanta “Braves” team opposed the decision stating, “This was neither our decision, nor our recommendation, and we are saddened that fans will not be able to see this event in our city.” (Atlanta Journal Constitution, April 2) The Atlanta baseball team has been criticized for its decades-long racist mascot name and for encouraging fans to use the “tomahawk chop” gesture during games, an insult to Indigenous peoples.

Nate McMillan, the Black interim head coach of the NBA Atlanta Hawks, responded to the MLB decision in the Atlanta Journal Constitution: “I really think it’s great that they’re bringing attention to what is happening in Georgia . . . trying to find ways to keep people from having their right to vote . . . passing laws that will limit basically their right to vote. The fact that you can’t pass out water at the polls — what is that? (April 2) And the AJC editorial board supported the MLB position.

The MLB decision was announced two days before the 53rd anniversary of the assassination of Civil Rights Movement leader, Dr. Martin Luther King Jr. King would surely have supported this boycott if he had lived. King was pastor at Atlanta’s Ebenezer Baptist Church and is buried near the church.

This year’s All-Star Game was to honor the legendary Hall of Famer Hank Aaron, who died in January. Aaron started his career in the Negro Leagues and joined the Atlanta (originally Milwaukee) baseball team in the early 1950s. It was in Atlanta that Aaron broke Babe Ruth’s all-time home run record in 1974, almost 25 years ago. Aaron was also a civil rights activist.

Those who opposed the MLB decision have tried to co-opt Aaron’s name, claiming he would want the All-Star Game to remain in Atlanta. But Dusty Baker, the Black general manager of the Houston Astros and a good friend of Aaron, believes otherwise, stating: “This is what Hank would have liked, even though it’s in his town. He always had the rights of the people in the forefront of his mind and in his heart.” (AJC, April 3)

Baker went on to say, “I think it’s great that the league’s going to properly honor Hank Aaron, no matter where the game is played. I’ve even thought possibly it might be Milwaukee, since that was Hank’s first and last stop, but nobody [from MLB] has said anything about it yet.” Milwaukee is now home to the Brewers baseball team.

Whether the MLB decision will have a domino effect — with other sports teams or mass gatherings taking a similar political stance of not investing in Georgia’s economy — remains to be seen.